The government had gone back and forth to disburse reserved funds to patch up BPJS Health’s deficit. The gap between spending and revenues remain wide.

Arief Hidayatullah had to search for additional income to pay his rent, motorcycle installment, and household needs. The 29-year-old nurse for a private hospital in Karawang, West Java said that he has not received his paycheck since June. “I had to borrow from my parents. It’s very embarrassing,” he told Tempo, two weeks ago. Arief is so short on money that he had to postpone his plan to give his pregnant wife an air conditioning unit for their room.

Arief is not the only hospital staff whose salary has not been paid. Other hospitals are also suffering financial difficulties because the Health Care and Social Security Agency (BPJS Kesehatan) has not paid patients’ health service fees. The Jakarta government noted that the bills from eight hospitals in the capital had not been disbursed. The value is Rp130 billion.

“Each hospital has receivables worth up to tens of billions of rupiah,” Ida Bagus Nyoman Banjar of the Indonesian Regional Hospitals Association, said some time ago.

BPJS’s cash flow is battered, and the national health insurance provider suffers deficits every year. Its CEO Fachmi Idris said that each month the agency spends some Rp7.4 trillion, but only makes Rp6.4 trillion. This means a deficit of around Rp12 trillion in one year. The company also has last year’s losses of Rp4.5 trillion to think about. By the end of 2018, BPJS Kesehatan’s deficit is estimated to reach Rp16.5 trillion.

President Joko Widodo knows about this. That is why, he had for several times summoned his ministers and Vice President Jusuf Kalla to discuss BPJS Kesehatan’s budget problems—including about plans to inject funds. According to Health Minister Nila Moeloek, the last meeting was held on Friday, September 7 at the Bogor Palace. Similar meetings were done at the Finance Ministry’s office on September 5, 7, and 10.  The Finance and Development Supervisory Agency (BPKP) was also asked to recalculate the deficit.

According to an official, during the meetings the Finance Ministry were not subtle in demanding BPJS Kesehatan’s transparency over its income and expenses—including the bills charged by hospitals and their due dates. Transparency was also an issue complained by the National Social Security Board (DJSN) in a hearing with the House of Representatives’ (DPR) Health Commission, Monday last week.

Deputy Finance Minister Mardiasmo said that Finance Minister Sri Mulyani Indrawati had sent a letter asking the BPKP to review and re-audit BPJS’ income, expenses, and deficit estimate until 2018. “We even asked for the help of actuaries who can calculate reserves and bills,” he said. 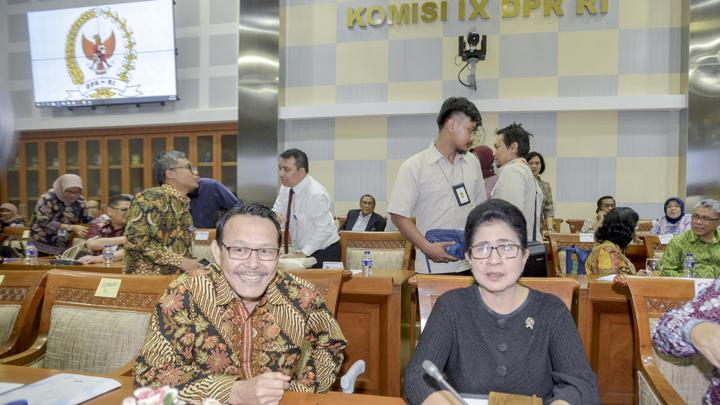 The BPKP corrected the deficit of Rp5 trillion to Rp11 trillion. Corrections were made to the total amount of receipts and benefits, as well as operating expenses. The Finance Ministry also included a number of programs as an alternative solution—referred to as a policy mix, which have the potential to curb deficit by around Rp3 trillion; bringing the total to Rp8 trillion.

Regarding transparency, Fachmi Idris assured that BPJS Kesehatan submits monthly reports to the Finance Minister and the DJSN. “All data is there.” He is ready to provide the requested data, in accordance with the Public Information Disclosure Act, if needed. In addition, the Supreme Audit Agency (BPK) audits the BPJS’ performances and holds inspection audits for specific purposes.

Audits are also carried out by a public accounting firm and the Financial Services Authority (OJK) related to finance. “We don’t mess with numbers. If numbers change, that is because the dynamics of the program, participants and utilization,” Fachmi remarked.

The Presidential Staff Office, according to its official, had actually suggested that the Finance Ministry should save BPJS Kesehatan by covering all deficits. This proposal was made during several cabinet meetings and non-ministerial meetings; citing that the rescue scheme is a form of the government’s commitment to the National Social Security program (JSN). However, the Finance Ministry requested the presence of a legal umbrella before doing this; and that is in the form of a presidential regulation.

Responding to this, the Presidential Chief of Staff Moeldoko only said that the government was ready to disburse Rp4.99 trillion to cover BPJS Kesehatan’s deficit. “We had a meeting a week ago, soon we will disburse [funds] for urgent needs,” he said after opening the national campaign of stunting prevention in Jakarta, Sunday last week. He added that the budget should only be used to cover for short-term needs, not solving the main problem of losses. The government will use the JSN reserve fund.

Mardiasmo said that President Jokowi had ordered the Finance Ministry to immediately disburse a reserved fund amounting to Rp4.99 trillion, given the increasingly staggering health BPJS. For this reason, Minister Sri Mulyani issued a ministerial regulation on the disbursement of budget for BPJS Kesehatan. “Now we are making a list of the budget implementation,” he said. Furthermore, he ensured that the funds could be disbursed as early as last weekend and no later than the beginning of this week.

Fachmi is confident that the government aid will be disbursed. Right now, he said, there are several administrative processes being carried out to ensure good governance in the disbursement.

BPJS Kesehatan is in charge of organizing the Indonesia Health Insurance-National Health Card (JKN-KIS) program. The agency also accommodates the transfer of several providers of health insurance programs, such as Askes, Jamsostek and ASABRI, as well as social assistance programs in the field of health, Community Health Insurance, since January 1, 2014.

The JKN-KIS program has been running for less than five years, and already the number of participants had reached 202.2 million people as of September this year. This makes BPJS Kesehatan a health insurance provider with the largest participants in the world. A total of 92.4 million of them are entitled to receive assistance in paying premiums, called the PBI. These are people classified as the as poor and vulnerable. Other participants who are non-workers as well as formal workers and their families who categorized as non-wage workers (PBPU), join this program by paying the premiums themselves.

The problem is, BPJS Kesehatan calculates, the increasing number of participants has the potential to increase deficit. The cause: the premiums are too cheap. The PBI group’s contribution, for example, is only Rp23,000, far from the ideal amount proposed by the DJSN in 2015, which was Rp36,000. Based on provisions, DJSN may actually propose premium increases every two years. Fachmi Idris hopes that the DJSN will immediately issue new figures based on real counts. Because, if the premium gap remains, costs will continue to swell. “There will be a serious problem in the future if we pursue universal coverage with premiums that are less than the actuarial count. The deficit will be wider. “

The DJSN said that BPJS Kesehatan suffers from structural deficits, which are partly due to unequal premiums and utilization. Expenditures for PBPU group participants, for example, are four times of the premium value. The DJSN also requested the support of the DPR to adjust the premium, at least for the PBI segment, which is subsidized by the government. “If this contribution is not restructured, even if the entire deficit is covered by the government, there will still be problems,” DJSN chairman Sigit Priohutomo said.

During the 50th anniversary of BPJS Kesehatan in July, Vice President Jusuf Kalla said in his address that the huge deficits exist because the law mandates the insurance of all types of diseases without restrictions; and without the obligation for participants to share the medical costs. This condition is exacerbated by the amount of PBI contribution that does not refer to the actuarial count, due to the limited government budget.

Another problem, Kalla said, is the assumption that the implementation of the National Health Insurance program—including the financing—is the responsibility of the central government. Therefore, the local government does not have incentives to protect the community with promotive and preventive efforts. There is also no effort to meet the needs of health facilities in the local area.

This assumption also creates a moral hazard in the provision of referrals. Health services that should be given at the regional level are referred to advanced health facilities, which are the responsibility of the central government. This is not ideal, since the frontlines of public health are is regional health centers (puskesmas) and hospitals, which are the responsibility of local governments.

To maintain spending quality, BPJS Kesehatan will carry out disseminations to medical personnel. “We must not let health workers commit fraud because of ignorance and lack of knowledge,” Fachmi Idris said. The plan is to hold a trial phase until the end of this year. The investigation period for the quality of spending will be implemented starting next year.

According to Health Minister Nila Moeloek, the Health Ministry, BPJS Kesehatan, and the Corruption Eradication Commission (KPK) have finalized guidelines for handling frauds in the JKN program. Field tests have also been carried out.

Koesmedi Priharto, chief of the Jakarta branch of Indonesian Hospitals’ Association, agreed that frauds must be eradicated. However, he said that a clear dissemination is needed. As an example, he said doctors may have an opinion that a patient needs vitamin—based on diagnose. Conversely, the BPJS may think that vitamin administration is unnecessary. “If we tell them that it is not allowed, then the doctors will not give them,” he said.