Vaccines are not rejected but their halal status that is questioned - Cover Story - magz.tempo.co

Vaccines are not rejected but their halal status that is questioned


The second phase of the national measles-rubella (MR) vaccination program is on the brink of failure amid the public’s anti-vaccine sentiments. By the middle of last week, the program, run throughout August and September, only managed to achieve 49.07 percent coverage of the 95 percent to be achieved by the end of September. The regions with the low coverage rate of below 30 percent are South Sumatra, South Kalimantan, Bangka Belitung, West Nusa Tenggara, West Sumatra and Riau with Aceh topping the list with 4.94 percent.

The health ministry’s disease prevention and control director-general Anung Sugihantono explained that the low coverage in the 28 provinces outside Java was caused by the public’s concerns over the vaccine’s halal (allowable) status as the India-made serum had yet to be certified halal by the Indonesian Ulama Council (MUI). “People in almost all the regions questioned this,” Anung explained to Tempo’s Devy Ernis in his office last week.

The health ministry met with the MUI early August, three days after the launch of the program. Following the meeting which was also attended by the vaccine importer Bio Farma, the ministry urged the public to wait for the edict by MUI.

On August 20, the MUI issued the fatwa (ruling) No. 33/2018 on the MR vaccine produced by the Serum Institute of India which indeed uses porcine-derived materials. Since there is no other MR vaccine which is completely free of haram (religiously unlawful) elements, the MUI declares the vaccine mubah or permissible under the compulsion of necessity.

Anung, former public health director-general, who took up the new position in February, is optimistic that the coverage rate will increase following the edict and the extension of the program. “Although there still may be unvaccinated children,” he said in a follow-up telephone interview Tempo’s Angelina Anjar on his way to attend United Nations high level meeting in New York, US.

Why did the health ministry take care of the halal certificate for the measles-rubella vaccines only now?

Did Bio Farma as the importer not ask the producer to have the vaccine certified?

Before I took over the post, Bio Farma did inform the producer. But, they (the producer) were didn’t really understand the halal issues. So, they didn’t apply for it until last month.

While the halal status (of products) is a very serious issue in Indonesia...

For certification, the MUI requested the materials, manufacturing process and the management data. Everything was scrutinized. SII wasn’t familiar with that kind of process. It’s like sharing a trade secret, so Bio Farma couldn’t force them.

How was it resolved?

On July 30, myself and Bio Farma met with the MUI to discuss this issue. Where did the problem lie actually? It turned out, distributors can also apply for certification after all. So, Bio Farma immediately submitted the application. On August 3, during Health Minister Nila Djuwita Moeloek’s courtesy visit to the MUI, we discussed the MR vaccination program and the halal certification for the vaccine as well. While immunization is governed by the edict No. 4/2016 regarding immunization (prohibiting the use of haram materials but allowing it if the disease can cause permanent disability), for vaccines, we were asked to file a request for an edict. We later learned that the Bio Farma had already initiated the certification process.

Did SII mind their materials being dissected?

One of the recommendations of the August 3 meeting was to write to SII to submit the materials they use in the vaccine. On August 8, we received the reply that they were ready to send them over to the MUI’s food, drugs and cosmetics analysis institute, not to the health ministry. Eventually, the Fatwa No. 33/2018 regarding the SII’s MR vaccine came out.

Where did the MR vaccine rejection occur?

It isn’t rejection actually, but rather questioning whether the vaccine has been certified halal or not. The issue first surfaced in almost all regions in Java during the first phase of the program last year although they didn’t outright refuse it. For instance, several Islamic schools in Yogyakarta—13 if I’m not mistaken—were reluctant. In this period, several regional MUIs wrote to the health ministry and the central MUI.

MUI East Java. Although the region isn’t covered in the second phase, it wrote to the health ministry and the health commission of the House of Representatives last August. There were also questions raised by MUIs Riau and Bangka Belitung regarding the halal status.

Including Aceh, where the coverage rate was the lowest?

Yes, but, until now nobody rejected altogether. They just haven’t implemented it yet. There’s a difference, right?

What sort of efforts has the health ministry made considering that many areas in Aceh haven’t been immunized at all against MR?

Initially, we were scheduled to meet with the acting Aceh governor, Nova Iriansyah (who ordered his regional and city administrations to delay the immunization) on September 6, but the meeting was cancelled due to his other engagements.

Didn’t you ask to reschedule the meeting?

In the framework of regional autonomy, the ball is in the regional government’s court. In a case like this, we should also be looking to the home affairs ministry as regards the regional head’s responsibilities. This is about public service. All the logistics and healthcare professionals in Aceh are ready but what to do if the regional head does not authorize it?

Is there rejection by MUI Aceh?

I don’t have any data in that effect.

With the national coverage rate of 49.07 percent, what is the coverage per region?

Although the national coverage is still below 50 percent, some provinces, namely West Papua, North Sulawesi, Bali, East Nusa Tenggara and Lampung, have achieved the minimum coverage of 92 percent. In provinces that haven’t fulfilled the minimum coverage, there are several cities or regencies with very good coverage, such as Jayapura which achieved 100 percent coverage. It means some regencies have already met the minimum coverage although their provinces have not. This will be visible in herd immunity or the community immunity. Albeit Aceh Singkil’s low coverage of 11 percent, I hope that some of its villages or districts have 100 percent coverage.

What is the estimated coverage at the closing of the program?

If the situation persists, perhaps 60 percent by the end of September. The target is 95 percent.

Will the program be extended to meet the target?

We’ve discussed two scenarios. One is to extend the program for two weeks till mid-October. Under the current upward trend of one percent per day, we might achieve 85-90 percent after the two weeks’ extension. Second is to extend for a month till the end of October considering that antibodies take two weeks to develop. This is just a technical consideration.

Will the targets be different in the extension period?

We’ve calculated the resource allocation. Our strategy is to focus on small districts until we achieve 100 percent in the villages. This way we can boost the herd immunity.

Has there been a spike in coverage after the MUI issued the edict?

Hopefully, the response is positive. Bangka Belitung, for one, has responded positively. When the program was formulated last August, the Bangka Belitung deputy governor, Abdul Fatah, requested to delay the program. But, now that the fatwa is in place, the regional government is urging the public to participate in the program. Today (last Wednesday) Kiai Haji Ma’ruf Amin, MUI’s chair, is going to Aceh. Although the purpose of the visit is not to promote the edict, we hope that Pak Governor would receive him in that effect.

How big is the role of the anti-vaccine movement in the low MR immunization coverage?

Anti-vaccination supporters reject all vaccines, not just MR vaccines, because of their doubts over vaccines that do not have halal certification. As the movement became massive in the past few years, MUI issued the edict No. 4/2016 stipulating that immunization is mandatory. However, the movement continues despite the small followers. So, if we talk about the low vaccine coverage, it’s not about the vaccination in general that is rejected, but rather about the vaccines that do not have halal certificate.

If there is a halal label for the MR vaccine, will the coverage rate increase?

If God willing, yes, albeit continued resistance by some. 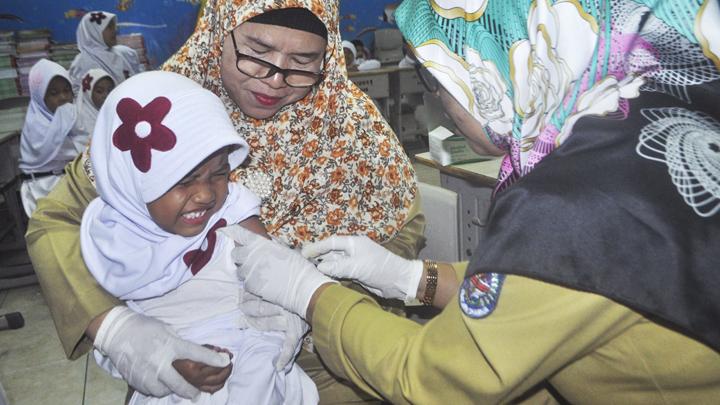 What are potential risks for children who haven’t had the MR immunization?

Personally, they will have no immunity against the preventable disease. Their immunity will determine their quality of life because in general germs live in the body and can spread to others. Without the immunity, they will be vulnerable to infections. With a good immunity, they will suffer only rashes if infected with measles. But when the immunity is low, measles can be fatal like what happened in Asmat last year. If we fail to implement immunizations, other countries might impose special treatments to our citizens when traveling there. For instance, Saudi Arabia imposes an obligatory meningitis vaccination for people traveling to the country. That is the Saudi government’s initiative to protect its citizens.

Can the government force all citizens to be vaccinated?

We can ‘force’ by raising awareness, but not by law. So, we have to keep trying with a persuasive approach.

At this time, the health ministry is running the Indonesia Sehat program through a family approach. We visit households and ask questions on 12 health indicators including one related to immunization. Afterwards, we will establish the health status of a given family: healthy, almost healthy and so on. There, we can also use this opportunity to use a personal or community approach. Every community always has influential figures. We, together with the MUI, will approach these figures so that they can explain halal-haram issues surrounding vaccination to their respective communities.

The health ministry has been criticized for its weak MR vaccination promotion. What is your response?

Perhaps there is some truth in saying that we don’t have a strategic communication in place. But it doesn’t mean we don’t have it at all. We’ve communicated with the MUI since June regarding the second phase of the program. We also gave sufficient elucidation at the national level.

But, it’s other parties which moved the vaccine drive via religious leaders such as preacher Abdul Somad. His sermon video endorsing the MR vaccine containing porcine materials went viral around the end of August.

Social media is a now such an influential vehicle, both positively and negatively. We can’t stem it. But, I think, it’s not sufficient with one personality speaking up to boost achievement from one percent to two or three percent. There are other influencing factors.