What Lies Beneath Palu


Researchers discovered the cause behind the strong magnitude 7.4 Palu earthquake on September 28. There was a jump of seismic energy to a nearby fault

Mudrik R. Daryono’s mind had been filled with questions ever since the magnitude 7.4 earthquake struck Palu, Central Sulawesi, on September 28. The quake was centered inland near Sirenja, Donggala Regency, about 80 kilometers Northwest of Palu, in a depth of 11 kilometers. He wondered, could this be the massive earthquake once predicted to shake Palu based on the calculation of earthquake repetition in the Palu-Koro fault?

Initially, Mudrik and other earthquake researchers suspected that the quake was triggered by seismic activity in the Palu segment of Palu-Koro fault line. Earthquakes of magnitude 5.9 had occurred in that segment between 2005 and 2009. In a research for his doctoral dissertation in 2012, Mudrik predicted that a large earthquake would occur in the same segment. He informed Tempo in 2014 about the quake potential. Mudrik also warned the Central Sulawesi provincial administration during an audience with the governor in 2017.

The recent quake surpassed the maximum magnitude of 6.8 in the Palu Segment based on the Seismic Hazard Map of Indonesia 2017, published by the National Center for Earthquake Studies (Pusgen). This fact troubled Mudrik. Why did it reach 7.4 in magnitude? The answer was finally provided by findings later uncovered by Mudrik and Pusgen research team deployed by the Public Works and Housing Ministry between October 9 and 13.

The group of researchers consists of 16 members from various institutions and disciplines, including Professor Ramli, a liquefaction expert from Malaysia. Their main goal is to find clear explanations for causes behind the Palu-Donggala earthquake, tsunami, and liquefaction. The findings will also be used in re-planning efforts of afflicted regions. Results from the research were explained in an open discussion in the East Hall of Bandung Institute of Technology (ITB), last Tuesday.

Mudrik, a researcher from the Research Center for Geotechnology, Indonesian Institute of Sciences (LIPI), is a member of the geology group tasked with tracing the tear along the fault line. The survey discovered ground cracks around 15 centimeters wide in the western coast of Donggala. In Palu, where the largest crack is found, the gap measures almost 6 meters wide (580 centimeters). “That is in Balaroa, in the western region of Palu,” said Mudrik in his office at the LIPI Research Center for Geotechnology, Bandung, West Java, Wednesday three weeks ago.

Discoveries uncovered by Mudrik and the other team members came as a surprise. It turned out that Palu segment was not the only one moving, but also a third of the Saluki segment—a nearby segment 6 kilometers away. Mudrik found the evidence when he revisited a testing trench he built in Omu village, Sigi Regency, during a research in 2011. “The ground shifted by 320 centimeters,” he said.

Mudrik suspects that it was the movements in these two segments that contributed to the overall strength of the Palu earthquake, which surpassed both the maximum magnitude in the Palu segment of 6.8 and Saluki segment of 6.9. Researchers are astonished to learn that both segments in the Palu-Koro fault line moved simultaneously. “It was beyond our prediction,” said Mudrik.

Theoretically, based on studies of previous earthquakes around the world, Mudrik explained that two segments 4 kilometers apart should each produce a separate quake. If their distance is less than 4 kilometers, the seismic energy may jump to a nearby segment. It was this transfer of force that may have happened during the quake, that evening on September 28.

A similar phenomenon, Mudrik continued, have once occurred on a greater scale in New Zealand. Some 13 segments of the Kaikoura fault line moved at once during a magnitude 7.8 earthquake on November 14, 2016. “Even with different directions of movement, the seismic energy may still be transferred across,” he said.

Now that part of it has ruptured along with with the Palu segment, does the Saluki segment still pose a seismic threat? Mudrik said he does not know for sure. Neither does he know about the condition of the rest of the segments. “It may spread to the Matano Fault, into the subduction zone, we do not know,” he said. Scientifically speaking, there is an amount seismic energy released during an earthquake, which then moves to different location. “From mitigation point of view, we ought to remain alert.”

It is this very mitigation aspect of the earthquake that Irwan Meilano, task force deputy from ITB who also joined the research team, found to be disappointing. Irwan, an earthquake expert from the ITB Geodesy Expertise Group, said that the seismic hazard map has been made in 2017 to predict possible disasters in the future. “But still, the earthquake created a disaster,” he said.

Another team member, Hamzah Latief, a tsunami researcher from ITB, shares Irwan’s concern. He regrets that the Palu-Donggala earthquake resulted in the loss of thousands of lives. “Seeing Palu, I am deeply saddened because we already have the data and the map, which were informed to the provincial government but apparently failed to reach the public,” he said. 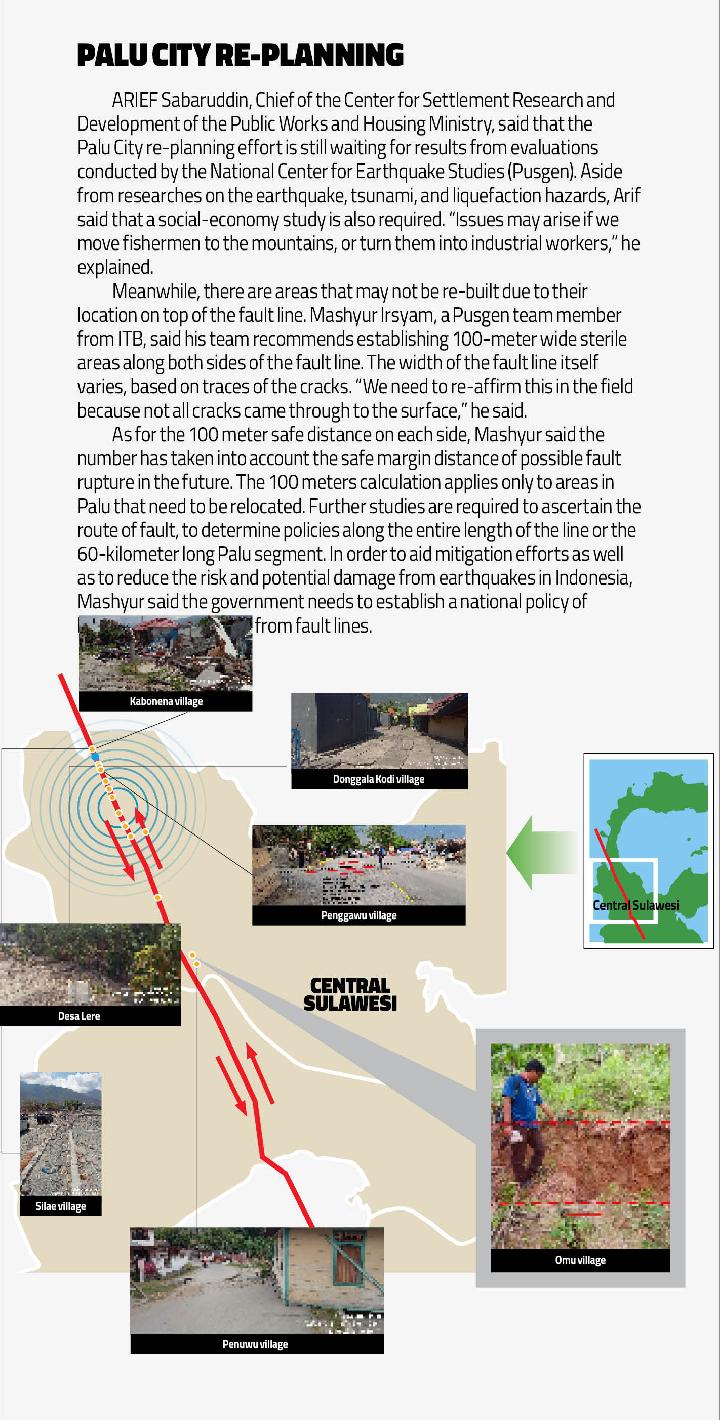