A Former Prosecutor in Lockup

His lawyer says he is being criminalized due to a conflict with the Attorney General.

A public prosecutor investogator gave a piece of paper to Chuck Suryosumpeno on Wednesday in mid-November. In a questioning room on the ground floor of the Deputy Attorney General for Special Crimes Building, Chuck was asked to write down answers to questions related to the investigation. Despite being asked less than 10 questions, this former Chairman of the Attorney General’s Office (AGO) special task force for the processing of appropriated and confiscated items was given four hours to answer.

There was no verbal questioning. After Chuck finished writing his answers to the questions, a prosecutor entered the writing into a computer. “The written questions were the same as those asked during the investigation in 2016. They just repeat them,” Chuck’s lawyer, Haris Azhar, quoted his client on Friday last week. After exiting the questioning room, Chuck was given a pink vest and taken to the AGO’s Salemba Detention Center.

The detention comes just a month after Chuck Suryosumpeno was officially named a criminal suspect in a letter signed by the AGO’s Deputy Attorney General for Special Crimes Adi Toegarisman. Chuck is accused of committing corruption in connection with the execution of assets confiscation belonging to Hendra Rahardja, who was convicted of corruption over Bank Indonesia Liquidity Funds (BLBI) in 2011. 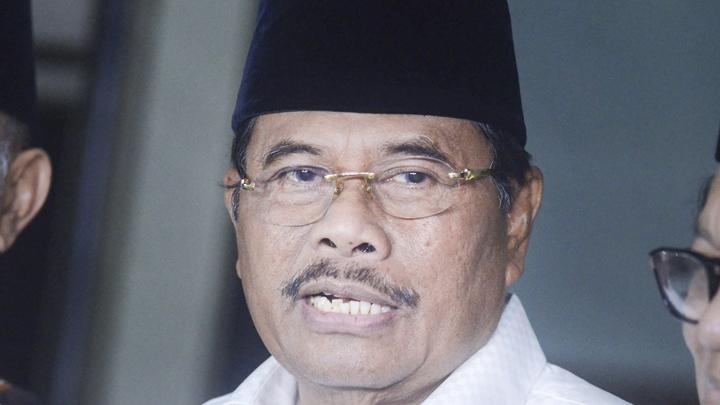 That suspect status came on October 23, the same day that the Supreme Court uploaded their verdict to their website for a judicial review which had decided in favor of Chuck for his lawsuit against the Attorney General, related to his dismissal as Chief of the Maluku District Attorney’s Office. Chuck dismissal at the end of 2015 was also connected to assets execution belonging to Hendra. According to Attorney General Muhammad Prasetyo, his office could not execute the court’s verdict because Chuck had already been discharged from government employment. “There is a decision of the Attorney General regarding this termination of employment,” he said.

Muhammad Prasetyo was upset by Chuck’s court victory. He immediately presided over a meeting with the special crimes prosecution office to name Chuck a suspect. Director of Criminal Investigation for Deputy Attorney General for Special Crimes (Jampidsus) Warih Sadono was reluctant to comment about any special meeting with Prasetyo. “(Just go) to the Jampidsus or the Kapuspen (Head of Public Relations), because this is outside of my duties and function,” said Warih.

AGO Deputy Attorney General for Special Crimes Adi Toegarisman denied that any special meeting was held to name that former colleague of his a suspect. “The technical aspects of that case are handled by the investigators,” he said.

This case was started when Chuck Suryosumpeno executed the confiscation of assets belonging to Hendra Rahardja, who was convicted of corruption involving BLBI funds, in March 2011. At that time, he was chief the AGO’s special task force for the processing of appropriated and confiscated items, which had nine members from each of Jakarta’s public prosecution offices. This task force formed by Attorney General Basrief Arief was coordinated by Agung Suwardi Hartono, chief of the AGO’s finance bureau. 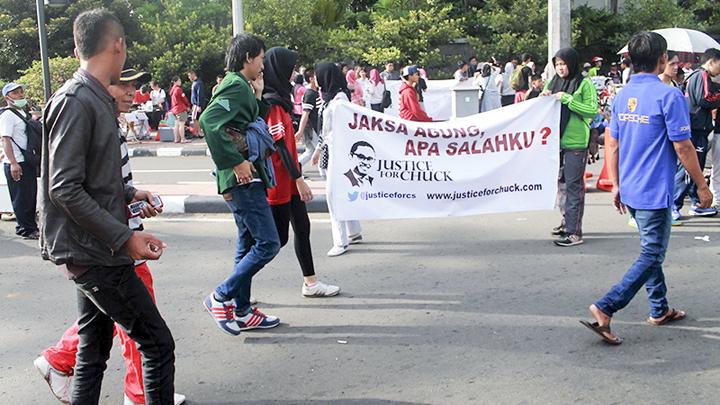 The search for Hendra Rahardja’s assets began with data from one member of the task force from the Central Jakarta district attorney’s office. The assets in question were three plots of land, one each in Jatinegara, East Jakarta; Puri Kembangan, West Jakarta; and Bogor, West Java.

Based on verdict of the Central Jakarta District Court and the Jakarta High Court, Hendra was sentenced to life in prison for taking Rp2.6 trillion in BLBI funds. That former commissioner of Bank Harapan Sentosa was also obligated to repay Rp1.9 trillion. Before Hendra could serve his sentence and return state funds, he died while on the run in Australia in 2003.

About those assets belonging to Hendra, it turned out that the amount of money returned to the state by the special task force led by Chuck was far below target. The 45 hectares of land at Puri Kembangan brought Rp20 billion to the state coffers. The 7.8 hectares confiscated in Jatinegara only made Rp2 billion.

The 9 hectares recovered in Jogjogan, Bogor, only brought Rp500 million. A total of Rp22.5 billion was returned to the state. However, according to an estimate of the AGO, those three assets were worth about Rp1.91 trillion. “The amount of money which should have come in, didn’t [come in],” said Adi Toegarisman.

The AGO concluded that Chuck had taken uncoordinated measures with that confiscated land, and had sold the assets to an inappropriate party. “There were several procedural violations and his actions resulted in state losses,” said Adi. Chuck did not auction off Hendra’s assets, and sold them without having a court decision.

Prosecutors also indicated that Chuck met with an envoy of Hendra related to those assets at a hotel in 2011. The prosecutor charged that the essence of this meeting was that Chuck agreed to sell the land without an auction. When handling the confiscated land in Jatinegara, for instance, Chuck sold assets belonging to Hendra’s wife, the late Sri Wasihastuti, to a resident, Ardi Kusuma. The basis for this was Ardi’s claim that he had already purchased 13 plots of land totaling 31,848.8 square meters for Rp12.7 billion.

Ardi turned over Sales Purchase Agreement (PPJB) act No. 74 dated May 30, 2000, to the task force. To settle the matter, a joint agreement was made on November 22, 2010. According to this act, Ardi agreed to pay in two installments. He had paid Rp6 billion, but Sri then passed away. Speaking to the asset recovery team, Ardi promised to pay the outstanding Rp6 billion in three installments to the state through the AGO.

Later, during the prosecutor’s investigation, it was said that the PPJB act in question was a forgery. This was also used by the AGO to indict Chuck Suryosumpeno. He was asked about this counterfeit act during questioning. Chuck, who is a former head of the AGO’s asset recovery center, said that he did not know about the act being a forgery. Based on the calculations of the Public Valuation Service Office (KJPP) of Kampianus Roman, the market value of the land owned by Hendra Rahardja at the time of the sale in 2010 was estimated at Rp34.5 billion.

Because only Rp2 billion had been deposited in the state cash account, the estimated losses came to Rp32.5 billion. The AGO did not give details about the evidence on the sale of the land in 2010, not in 2000 as is mentioned in the PPJB document. They were also reluctant to comment on why the state losses were calculated by a public value assessment office, not by the Supreme Audit Agency (BPK) or the Finance and Development Supervisory Agency (BPKP). “That comes later on. That is a technical issue,” said Adi Toegarisman, who was a former of chief of the Jakarta district attorney’s office for the 2013-2015 term.

Tempo attempted to confirm the audit which was conducted by Kampianus Roman KJPP. Ali Purba, an asset appraisal consultant with Kampianus Roman KJPP, said that their team was first summoned by the prosecutors on Wednesday last week. They explained the methodology they use in determining the value of the assets. “We have not received a SPK (work order),” said Ali. This includes estimating the value of land and calculating state losses, because those can only be done after receiving a work order.

Chuck Suryosumpeno denied all accusations. Chuck’s lawyer, Haris Azhar, said that his client is being criminalized due to a dispute or conflict with the attorney general. This was indicated in connection with Chuck’s duties as chief of the asset recovery center. The motive for this includes land in Pondok Pinang which had been blocked when Chuck was head of the task force, and which was unblocked during the term of Muhammad Prasetyo. “It was only based on goodwill and was not based on the laws and regulations about asset recovery, and all of the decisions to execute land confiscations are turned over to the attorney general,” said Haris.

Attorney General Muhammad Prasetyo denied the accusation by Chuck’s lawyer. According to him, the investigation on Chuck has been objective and proportional. “This case has long been in the preliminary and criminal investigation stages,” said Prasetyo.

Another of Chuck’s lawyers, Sandra Nangoy, said some time ago that the land at those three locations were not auctioned off. This was because the asset recovery team did not find any direct connection between that land and Hendra Rahardja. Those assets had already gone to a third party before Hendra’s case reached court. The land in Jatinegara, for example, according to Sandra, was sold for Rp12 billion by Hendra’s wife, Sri Wasihastuti, to Ardi Kusuma. However, Ardi had only paid Rp6 billion to Sri. Ardi began to make installment payments to the state on the unpaid portion. “Ardi has voluntarily paid Rp2 billion of the Rp6 billion,” said Sandra.

Regarding the suspicion of a forged act, Haris Azhar said that this case should be taken up through general criminal law. According to him, if it is indeed a forged act, the person who committed the forgery should be charged, not Chuck. Regarding the accusation that a meeting took place between people connected with Hendra with the former President of the Asset Recovery Interagency Network Asia-Pacific in 2011, he said that no such thing ever occurred.