The Prambanan Project from Mega Kuningan


Prabowo Subianto-Sandiaga Salahuddin Uno did not ask a question prepared during rehearsal for the 2019 presidential election’s first debate. The pair was advised by Yudhoyono.

SITI Hediati Hariyadi approached Prabowo Subianto after the fifth session of the presidential and vice-presidential debate last Thursday. Titiek Soeharto—as Siti is known—was incensed by her former husband’s answers on stage. During the question-answer session on the topic of corruption, Joko Widodo criticized Prabowo for allowing former corruption convicts to run as legislative candidates from the Gerindra Party.

As witnessed by content and debate director for Prabowo-Sandiaga Uno’s campaign team, Sudirman Said, Titiek said Prabowo should have launched a counter-attack. “Why not object [by saying that] most of those implicated in corruption cases are cadres from Jokowi’s supporting parties?” said Titiek, as relayed by Sudirman last Friday. Gerindra politician Miftah Sabri, who also witnessed the event, said Prabowo only smiled at Titiek’s outburst.

During the debate, Prabowo responded to Jokowi’s question about former-convict legislative candidates with a ‘casual’ answer. “We will simply announce to the people. If the people don’t want to vote [for them], they won’t be elected,” said the former commander of the Army’s Special Forces (Kopassus).

Prabowo had, in fact, predicted that the candidacies of former corruption convicts in Gerindra would be brought up by his opponent, which is why Prabowo rehearsed his answer several times one week before ‘performing’ on the General Elections Commission (KPU) stage.

According to Sudirman, his team had already given directions for the answer, but Prabowo did not refer to these guidances during the debate. The team asked Prabowo to refer to Jokowi’s statement in May 2018, when the latter said former corruption convicts have the right to run as legislative candidates. “It’s an individual’s political right,” said Jokowi.

Neither did Prabowo launch the ammunition prepared by his team. He was reluctant to ask a question about the resolution of the attack against Corruption Eradication Commission (KPK) investigator Novel Baswedan, who was assaulted using acid by unknown persons in April 2017, causing near blindness in both eyes. Jokowi had promised to resolve the case in August 2017.

Sudirman said Novel’s case was included in the short list of questions in Prabowo and Sandiaga’s hands. The debate team also prepared Prabowo and Sandiaga with a solution for the Novel affair. “The Novel investigation is a top priority in our work program in the sector of law,” said Sudirman. “To us, the case is crystal clear.”

Prabowo never broached the topic during the debate. Sudirman, who sat right behind the podium, continued to whisper to Prabowo and Sandiaga asking them to immediately mention the investigation into Novel’s attack before entering the closing segment.

When he heard Sudirman’s input, Sandiaga asked Prabowo to give him 30 seconds for explaining their strategy for resolving the investigation. But Prabowo rejected the request, saying that he did not want to corner his competitor. “We’ll mention more essential issues, namely assisting law enforcement,” Sandiaga said, quoting Prabowo.

Sudirman received explanation from Prabowo that the strategy to stave off the opponent’s offensive was an effort to appeal to undecided voters. Based on Prabowo-Sandiaga national campaign team’s study, there are around 10 percent or at least 19 million undecided voters. The Prabowo-Sandiaga camp feels that by winning most of these votes, they will surely win the 2019 presidential election.

These undecided voters, said Sudirman, are made up of people who are rational, politically aware, and require a clear vision from the presidential candidates. “They don’t like a sales strategy that’s rude and disrupted by a debate model that’s reminiscent of street fights,” he said. “Offensive questions are one method of crass marketing.”

PRABOWO-SANDIAGA’S preparation intensified one week before the debate. Two weeks ago on Thursday, Prabowo met with Democrat Party General Chairperson Susilo Bambang Yudhoyono at the latter’s residence in Mega Kuningan, South Jakarta. Yudhoyono asked Prabowo to deliver a ‘speech for the nation’ prior to the debate. “We called the task the ‘Prambanan Project’,” said Miftah Sabri, member of Prabowo’s national campaign team. The team assigned the task that name because of the short preparation.

Prabowo himself prepared the content of his speech in a narrow time frame. Dirgayuza Setiawan, who is in the management of Tunas Indonesia Raya, a Gerindra wing organization, transcribed Prabowo’s address on a laptop. Once in a while, Prabowo would open his book, Paradoks Indonesia (The Indonesian Paradox).

Once his ideas were written down, Prabowo sent a draft of his speech to Yudhoyono. The Indonesian sixth president added several thoughts. After the draft was improved by Yudhoyono, the manuscript was read by Prabowo last Monday night at the Jakarta Convention Center, (JCC) Senayan. “The speech for the nation was a warm-up for the debate and a signal that we were ready for battle,” said Miftah Sabri.

Before the speech at the JCC, Prabowo received the debate team led by Sudirman Said at his home in Hambalang, Bogor, West Java. According to Sudirman, they discussed potential questions from the KPU surrounding the topics of corruption, law, human rights, and terrorism.

The next day, Prabowo and Sandiaga held a rehearsal at the inheritance home of Prabowo’s parents on Jalan Kertanegara 4, South Jakarta. Prabowo invited several experts, among others former KPK deputy chairman, Bambang Widjojanto, as well as two former members of the National Commission on Human Rights (Komnas HAM), Natalius Pigai and Hafidz Abbas.

Prabowo and Sandiaga simulated the debate in front of these individuals. Spokesperson for the campaign team, Dahnil Anzar Simanjuntak, acted as moderator. Others acted as Jokowi and Ma’ruf and delivered rebuttals.

At the end of the rehearsal, the experts gave their input. Bambang Widjojanto, for example, advised the couple to mention the strengthening of the KPK by recruiting independent investigators. “The increasingly sophisticated corruption cases require the KPK to have digital forensics experts,” said Bambang.

Bambang also recommended the strengthening of the KPK in the regions. During the rehearsal, Bambang offered to segment corruption eradication efforts into three regions: western, central, and eastern Indonesia. Prabowo referred to Bambang’s input during the debate on the KPU stage. “We will establish KPK in the regions,” said Prabowo in response to the panel’s question on how he plans to fight corruption.

Busyro Muqodas, former KPK chairman, also contributed to the discussion through Dahnil. Busyro said Prabowo and Sandiaga must point out the numerous regulations and government policies that open the window for corruption. “I used the Jakarta Bay reclamation and the Meikarta licensing scandal as illustrations for the debate team,” said Busyro. 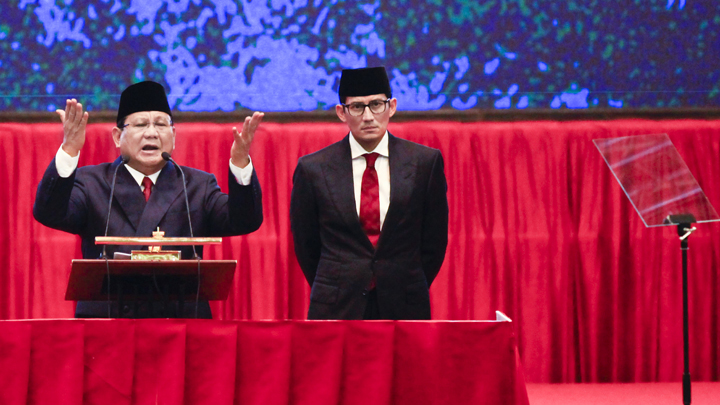 Another input came from Hafid Abbas. The former director-general of human rights at the justice and human rights ministry spoke about inequality in access to education and healthcare, as well as economic inequality. Hafid suggested that Prabowo mention the fulfillment of the basic rights of citizens as one of his human rights-based work programs. “I also gave the same suggestion to Pak Jokowi and Pak Jusuf Kalla,” said Hafid.

Sandiaga used the rehearsal to organize his findings during visits to 1,000 campaign locations throughout Indonesia. Based on what he observed in these places, Sandiaga prepared 20 cases to mention during the debate, two of which were indeed brought up.

Sandiaga talked about Najib, a fisherman in Karawang who was persecuted, in response to a question on the pair’s strategy to address discrimination. He also mentioned Lukman Dewantara, a person with disability who became an online business mentor, when responding to a question on the rights of the disabled. “All of these stories are real, not fictional, and were only mentioned by Sandiaga when they were relevant to the debate question,” said Sudirman.

Content was not the only area that was worked on. The team also paid attention to the pair’s performance. Deputy chairman of the campaign team, Nanik S. Deyang, and member of the communication division, Imelda Sari, were tasked with polishing the candidate pair’s communication style and body language so that their ideas may be absorbed by the public.

Prabowo did not continuously rehearse and chose to rest on the day before the debate. Meanwhile, Sandiaga continued to work on his presentation style, as can be seen in a 1.5-minute video sent by his team. In the video, Sandiaga is seen to be practicing delivering the pair’s vision and mission with the thumb and index finger on each of his hand forming an ‘L’.

Around noon on the day of the debate, Prabowo went to see Yudhoyono. According to Sudirman, who accompanied Prabowo, the Gerindra general chairman asked for advice from Yudhoyono, who has the experience of winning two presidential elections. Democrat Party Deputy Chairman Sjarifuddin Hasan said Yudhoyono and Prabowo spent more time discussing tips for the debate rather than on the vision and mission.

During the meeting, Yudhoyono gave Prabowo advice. As relayed by Sudirman, Yudhoyono warned Prabowo and Sandiaga against attacking their opponent and advised them to continue to speak with civility. “Apply an active defense system pattern, always be ready when the opponent attacks,” said Yudhoyono, as quoted by Sudirman.