Lita Anggraini and her colleagues mobilized thousands of domestic workers to unionize. They also allowed domestic worker issues to be recognized as a national issue.

While massaging her friend’s foot, Sri Siti Marni gave her instructions with a soft voice. The scars on her upper lip, where she once had stitches, gave her voice a nasal tinge. “Rotate the ankle to the right and left,” instructed the 23-year-old girl.

Both of her hands began to move, pulling each of her friend’s toes and exerting mild pressure on the soles with her thumbs. Her two friends imitated her movements.

Ani, as Marni is known, had the opportunity to teach foot massage at a course held by the National Network for Domestic Worker Advocacy (Jala PRT). The class she taught was held in Terogong, South Jakarta, at the base camp of the Sapu Lidi Domestic Workers’ Union, an organization under Jala PRT. Every Saturday, classes are held simultaneously with elementary, middle school and high school equivalency courses as well as other types of skill training.

Ani, a unionized domestic worker, receives free training through Jala PRT. Three years ago she escaped from her employer’s home in Utan Kayu, East Jakarta, after years of torture.

She began to work as a domestic worker after graduating from elementary school. Her family’s finances prevented Ani from refusing enticements from her former employers, who told Ani that she would be cared for as a foster child. Her would-be employers, a married couple, promised Ani that she would be put through school until adult age. But instead of receiving care and attention, Ani was put to work around the house. “If the work was seen as inadequate, I would be punished in all sorts of ways,” said Ani.

She was subjected to innumerable acts of violence until one day, in 2016, she was struck, causing her lip to tear and her vision to blur. She summed up the courage to escape through a second-floor window and ran to a police station to report her employer’s assault. When Ani received treatment at the hospital, Jala PRT founder Lita Anggraini learned about her case. “After surgery and treatment, I was taken in by Bunda Lita,” said Ani.

At a rented house in Jalan Bahari, Terogong, Lita devotes her time to domestic workers, Ani included. The over 300-square-meter house does not only function as a shelter for domestic workers in need of a safe space but also as a place for them to convene. Besides advocacy, Lita drills the domestic workers on their rights and responsibilities so that they feel empowered to negotiate with employers.

“I don’t want others to suffer from Ani’s fate, not paid their wages for nine months and tortured,” said Lita.

While advocating for Ani, Lita and her domestic worker colleagues took turns going to court. “They were glad and had the courage to ask their employers’ permission,” said Lita. As a result, Ani’s employers were sentenced to nine years in prison. 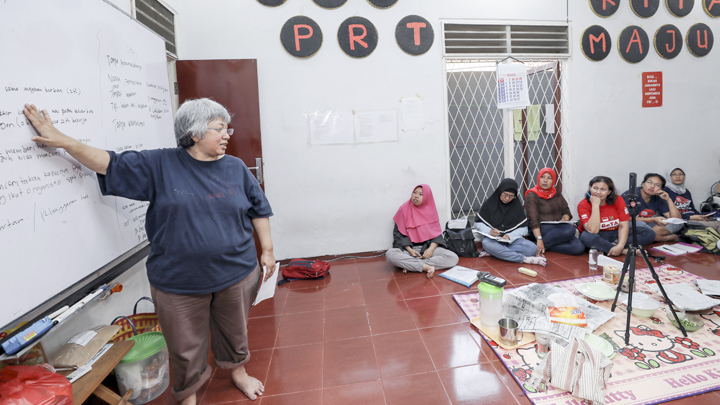 Lita Anggraini’s interest in domestic worker issues began 28 years ago, when she was a member of the Yogyakarta Women’s Discussion Forum. She and other colleagues in the forum advocated for Kamiyatun, a domestic worker from Ngawi, East Java, who suffered from violence during her employment in Gresik.

Lita and the Yogyakarta forum’s research into domestic worker issues intensified. “We see domestic workers as a labor group—women in majority, with low income—who experience all forms of violence and exploitation,” said Lita. In this social structure, she said, domestic workers are often up against middle-class employers. “In 1995, we focused on advocating and forming organizations for domestic workers.”

Domestic workers should be granted labor rights such as decent wages, leave, work contracts, and health insurance. There are also other issues that need to be addressed, for example, a domestic worker must be over 18 years old, must be paid overtime, must be given days off during national holidays or allowed to take other days off as substitute, a healthy living space and facilities, clear job descriptions, as well as education provided by the government.

According to Lita, these issues are rarely given attention by employers because domestic work is seen as having little value, when, in fact, “Domestic work has great economic, social and psychological contribution because it affects the employer’s productivity,” said Lita.

In Jakarta, the demand for substitute domestic workers always rises during end of fasting month Idul Fitri holiday. “This shows how crucial the domestic worker’s position is in the family,” Lita explained.

But in reality domestic workers are frequently subjected to various forms of violence, from intimidation and sexual violence perpetrated by employers to human trafficking by agents. Jala PRT’s data show that cases of violence rose to 342 in 2017 from around 230 in 2016. Between 2012 and 2017, the year 2014 showed the most number of cases of violence at over 400.

Another problem faced by domestic workers are unpaid wages and wrongful termination. PRT Sapu Lidi Terogong Union Coordinator Oom Umiyati was once fired because of her involvement in organization and because she attended a workshop for domestic workers in the Philippines. But thanks to her knowledge and skills, taught by Lita, Oom was able to demand two months of severance pay. “[My employer] did not want to pay at first, but I said if she didn’t pay I would report [her to the police],” said the 43-year-old woman, who was learning about litigation when we met her in October.

At the time, Oom and dozens of other SPRT Sapu Lidi members were asked to complete a police report form should they encounter problems as domestic workers. “You have to memorize this and [relevant] articles to avoid being lied to by the police,” said Lita. In managing litigation cases, Jala PRT partners with the Jakarta Legal Aid and LBH Apik.

As of late, Lita has grown more active in campaigning for decent work for domestic workers. She as well as union members often participate in training programs overseas. “Our target is that the ILO Convention on Domestic Workers will soon be ratified,” she said. Lita’s hope is that Jala PRT’s activity will continue to expand in the next three years.

PUTRI ADITYOWATI (This article is part of Tempo’s Women Project, with the support from the European Journalism Centre)