A Wellspring amid Oil Palm


The Segumon customary community is determined to salvage their ancestral land.

A variety of plants seemed to crisscross from behind the hills of the Segumon village, Sanggau Regency, West Kalimantan. Durian, rubber and cacao trees stand alongside a pepper field and a patch of rice field. On the opposite side oil palm trees marched on the slopes of the hills.

The area now belongs to the Segumon customary community after the environment and forestry ministry appointed the community as the 651-hectare Tembawang Tampun Forest’s caretaker in October. “There is regret, why did we let oil palm in,” said Petrus Kenedi, a Segumon resident and activist, at the end of November.

To the Segumon customary community, growing plants among oil palm trees has been the norm in the past decade. Before, they were enticed with a promising profit-sharing scheme to relinquish their right to manage the forest to an oil palm company in Sanggau. People in the community also found a new occupation; those who were farmers and growers became workers in the oil palm plantation. Kenedi said recently the people became disappointed because oil palm did not give them significant earnings; meanwhile, the forest’s history was slowly being erased.

Tembawang Tampun Juah has always been known as the Dayak people’s ancestral land. According to legends, the Dayak, now spread throughout Borneo, including Brunei Darussalam and Malaysia, first settled in that area. Ancestors of the Dayak then slowly left the settlement, and the area transformed into a forest of shrubs and large trees—now known as tembawang and passed on throughout the generations. In the broader sense, “tembawang” refers to land and plants managed and owned by customary Dayak communities. 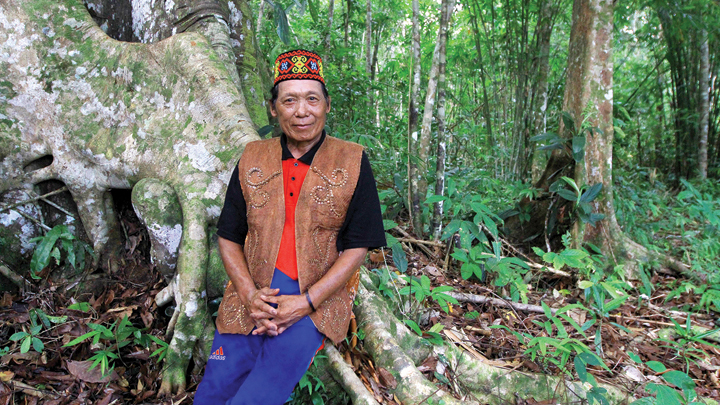 Refusing to be surrounded by oil palm plantations, the people of Segumon agreed to a change of course. Institut Dayakologi, a non-governmental organization focused on the conservation of Dayak culture and traditions, showed the people the great importance of their identity. The Segumon people then helped map the area’s boundaries, collect data and document customary laws mostly forgotten by the younger generations.

The community then came to several customary agreements, among others, tembawang may not be sold to outsiders, land clearing can only be done on tembawang land that is no longer productive, and products from the tembawang must be used for mutual benefit. This collaborative effort won the community recognition from the forestry ministry.

Dogin, a Segumon village official, said the people could not do much in the case of land that is already leased to companies. The lease will only expire in 20 years, but efforts to restore the forest are already in progress, namely by replanting a number of Tembawang areas. “The soil must first be restored because it’s truly dry due to oil palm,” he said. 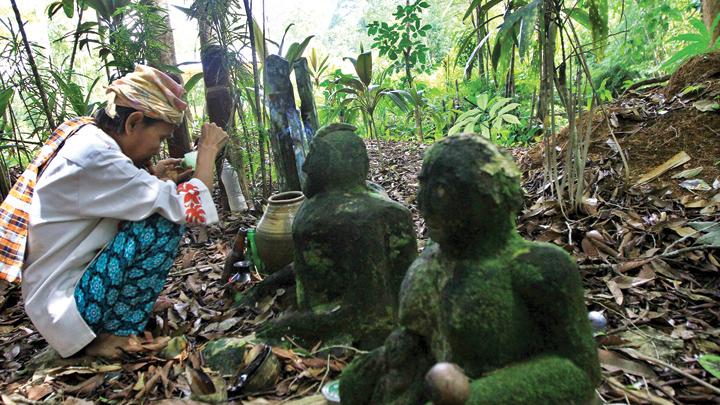 According to Institut Dayakologi Director Krissusandi Gunui, his organization has worked with the people to formulate a concept for an independent customary forest management institution. In the future, the work of the institution will be to preserve the culture as well as organize over 10 annual traditional celebrations, including Gawai, in Tampun Jauh, attended by many Dayak subtribes. “Gawai is part of the process of conserving customary forests, not an end goal for us,” he said.

The institute records that over 50 percent of Tembawang Tampun Juah owned by the Segumon people has been planted with oil palm. But Kris is certain that a good future awaits their acenstral forest—like the Segumon’s prayer each time they sow: “Bu adet tana, buar tana tujak, pusat pedi tumpat.” May this land be easy to cultivate, although it is vast, seeds planted will thrive.

Jangin, 70, recited a five-minute mantra in the Dayak Sisang language as he sat cross-legged on a mat, facing the sandong and pedagi totems—two sacred Dayak sculptures. Offerings, made of rice mixed with temulawak ginger (Curcuma xanthorrhiza), palm wine in a green glass bottle, and raw eggs, are spread on the mat. Jangin prayed for the ancestors’ blessing so that the guests who had just arrived in the Segumon village, Sanggau Regency, would be kept safe and their affairs made smooth.

After the mantra was read, a hen is rubbed on the visitors’ heads. The hen was then killed, prepared, and served to be shared by the locals and guests. The welcome ritual is known as ‘ncelat to the Segumon people. Held in the Tembawang Tampun Juah Customary Forest, village shamans such as Jangin are the only ones who can perform the ritual. “All ingredients for the ‘ncelat come from the forest,” said Jangin in late November.

The Segumon customary community is now recognized by the government as the caretaker of Tembawang Tampun Juah. On the border of Indonesia and Malaysia, the customary forest is believed to be where the Dayak’s ancestors first settled before moving to various parts of the vast island.

Durian, rubber, cacao, pepper, paddy, tuber plants, and cucumber grow in the ancestral land. Deeper in the forest, ruins of long Dayak houses and pottery pieces appear to emerge from the soil. Jangin and the Segumon people believe that these items are over 500 years old.

Sanggau Regent Paolus Hadi is also certain that his ancestors came from this place. He became gravely concerned when he visited tembawang seven years ago. Oil palm plantations had nearly surrounded the sacred land. Some of the people had given their rights to manage the land to oil palm companies. “If the land is not secured, it may end up existing only in stories,” he said.

Paolus made a quick decision to mandate the care of the sacred land to customary elders, paying them Rp10 million. “Now the land belongs to the Segumon customary community,” said the regent.

Paolus also accelerated the issuance of Government Regulation No. 1/2017 on the Recognition and Protection of Customary Law Communities. The regional regulation was among the conditions for the forestry ministry’s decree recognizing Tembawang Tampun Juah. Paolus and the community’s representatives received the decision with joy at the State Palace at the end of October 2018.