The President of South Jakarta


Prabowo Subianto insists he triumphed in the presidential race. The two-time presidential hopeful plans to rally the people in his support, in a non-violent display of “people power.”

They stared at the only television screen in the room, showing a TV-One broadcast in the house’s main hall. The channel began to show quick count results of the 2019 presidential election by several survey institutions. According to one of them, Indikator Politik Indonesia, Joko Widodo-Ma’ruf Amin led with 55.97 percent, to Prabowo-Sandiaga’s 44.03 percent. At the time, only half of the votes had been counted.

Amien Rais was the first to speak up. He said the odds of winning would only decline as the margin grew wider. “We could lose (if there is a margin of) 10 percent,” he said. He left the room and went into Prabowo’s office. In his inner sanctum, Prabowo, Sandiaga, and several supporters, including Prosperous Justice Party advisory council chair Salim Segaf Aljufri and the National Movement to Safeguard the Fatwas of Ulama chair Yusuf Muhammad Martak were engaged in a closed meeting.

At around 3:40pm, Wisjnuprapto, a professor at the Bandung Institute of Technology’s civil and environmental engineering department, who sat next to Soenarko, reported that Prabowo-Sandiaga was ahead according to Kompas TV’s quick count, which he was viewing on his cell phone. Gerindra politician Ahmad Riza Patria, who was near the TV set, took the remote control and switched the channel.

But apparently the results remained  the same: Prabowo-Sandiaga were losing out to Jokowi-Ma’ruf. Ahmad Riza again switched channels back to TV-One. The clamor subsided when Prabowo’s religious instructor, Ansufri Idrus Sambo, invited the guests to perform the Asr prayer with their champion, and the television was turned off.

After prayers, Prabowo-Sandiaga went back to Prabowo’s office. Ustad Sambo asked those still sitting on the floor to join in prayer for Prabowo’s victory.

In the next room, Prabowo, Sandiaga, and their elite supporting group huddled for yet another meeting. This time, Prabowo’s supporters urged him to adopt a stance in response to the election results. “Retired army generals and Muslim leaders wanted people power. Prabowo was seen as too nice because he was unwilling to make a stand,” said Prabowo’s best friend, Maher Algadri, who was present in the meeting.

One and a half hours later, Prabowo-Sandiaga returned to the main hall. Sandiaga immediately sat on the rug with his legs crossed while Prabowo made his speech. According to Prabowo, the findings of several survey institutions that Jokowi-Ma’ruf had won was the incumbent’s strategy to win a war of nerves. He said the media exaggerated the results. “To make our supporters dispirited and accept that they (Jokowi-Ma’ruf) have won,” the presidential-hopeful said ardently.

He then expressed his plan to declare victory to the public, saying the coalition was preparing a non-violent ‘people power’ movement under the name “Gerakan Bhinneka Tunggal Ika,” led by the National Movement to Safeguard the Fatwas of Ulama. Bhinneka Tunggal Ika refers to the country’s national motto, meaning unity in diversity. Berkarya Party politician, Siti Hediati Hariyadi, known as Titiek Suharto, was also present in the room and seemed to be listening intently to her former husband’s speech.

After Prabowo’s address, former coordinating minister for maritime affairs, Rizal Ramli, and Amien Rais also delivered speeches. According to Rizal, the movement Prabowo was referring to would only involve sitting, praying, singing the national anthem, and listening to speeches by a number of figures in front of the State Palace. Prabowo, Rizal himself, and Bachtiar Nasir—an activist of the National Movement to Safeguard the Fatwas of Ulama—would be among those giving speeches. “The target is for one million people to attend, and to be talked about even by international media,” said Rizal.

Sandiaga did not speak to the visitors. Before returning to Prabowo’s office room, Sandiaga was hugged by his colleagues, who then patted his shoulder. His looked forlorn, his eyes were moist. According to Gerindra politician Miftah Nur Sabri, Sandiaga did not feel well. “Bang Sandi had to rested in a room on the second floor ,” he said. Prabowo did not follow Sandiaga.He  delivered an address on stage  to reporters and supporters in the front yard, claiming victory. “We won at 55.4 percent. All volunteers must safeguard the victory at voting stations and at subdistrict level,” he said.

Prabowo returned to the stage at 8:25pm. This time, he said he had won with 62 percent. Prabowo closed his oratory with the takbir (“God is Great”) and by kneeling in gratitude in front of his supporters.

Inside the house, Prabowo’s son Ragowo Hediprasetyo, known as Didit, went looking for his father, who had apparently returned to his workroom after the speech. After, Prabowo went to the main hall and shook hands with guests still present. Some in the audience interrupted, asking for selfies. They chanted, “President! President! President!”

Around 10pm, Prabowo again made an appearance, this time carrying Bobby the Cat, his cat. From the second floor, he lifted his cat toward guests who were looking up. “How are you, Mister Vice President?” Prabowo said to Bobby.

Two days later, on Friday night, the various survey institutions had finalized the quick count results. The final results did not significantly differ from the results broadcast on Prabowo’s TV set on the day of the election. Indo Barometer, for example, showed Prabowo-Sandiaga lost with 45.65 percent against Jokowi-Ma’ruf’s 54.35 percent. 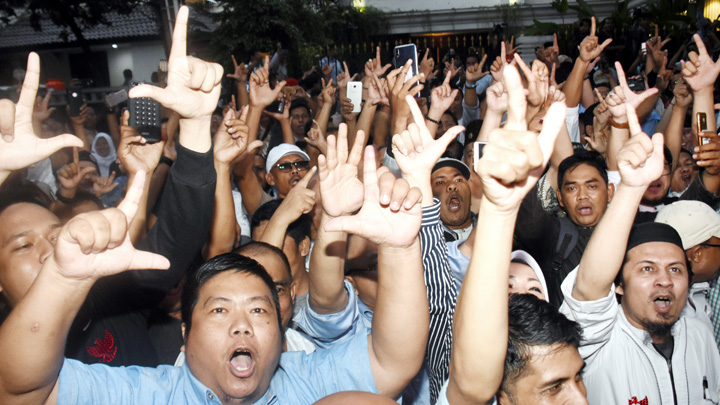 According to Rizka, the rapid rise in Prabowo’s popularity was because Muslim voters with high levels of education, who had prior been in the undecided category, ended up leaning toward candidate pair No. 2. The pair was also seen as having successfully campaigned for economic issues as well as promising increased purchasing power. Yet another factor was the work of the Prosperous Justice Party (PKS).

PKS Chair Mardani Ali Sera said toward the end of the campaign period, his party worked harder to bring Prabowo-Sandiaga to victory. The party’s cadres in West Java, for example, led by former West Java Governor Ahmad Heryawan, diligently knocked on the doors of would-be voters and organized prayers. “Our votes in West Java rose compared to five years ago,” said the deputy chair of Prabowo-Sandiaga’s campaign team on Thursday, April 18.

Nevertheless, Prabowo-Sandiaga still failed to win, although according to Indikator’s quick count the pair won in 13 provinces. Mardani Ali Sera believes the primary cause was the landslide win in Central Java and East Java.

But what is felt to be the primary contributing factor to the rise in Prabowo-Sandiaga’s popularity was the statements of support by clerics Abdul Somad Batubara, Abdullah Gymnastiar, and Adi Hidayat. According to National Mandate Party secretary-general and concurrently deputy chair of the Prabowo-Sandiaga campaign team, Eddy Soeparno, it is possible these Muslim preachers enlisted previously undecided Muslim voters. “Abdul Somad alone could have added two to three percent nation-wide,” said Eddy.

Indikator’s exit poll showed that Muslims tended to vote for Prabowo-Sandiaga, with a 51:49 ratio. Prabowo also received overwhelming support from voters from the Muhammadiyah circle and other Muslim organizations, who live in urban areas, such as those affiliated with Persatuan Islam (Islam Unity), as reflected in Poltracking Indonesia’s exit poll.

According to Indikator’s quick count results in various provinces, Prabowo received great support from his old base. He did not only manage to keep his diehard voters, he also gained more support. In West Java, the region with the most voters, for example, Prabowo obtained 60.63 percent, compared to 59.78 percent in 2014. In West Sumatra and Aceh, he managed to garner over 80 percent. Prabowo also triumphed by a wide margin in Banten, Ma’ruf Amin’s home region.

As of Friday, April 19, Prabowo still refused to accept the results of quick counts by various survey institutions. He held a thanksgiving celebration at his family home on Jalan Kertanegara. “I repeat that today, I, Prabowo Subianto, state that I and Sandiaga Uno are declaring victory as Indonesia’s President and Vice President for 2019-2024, based on a real count of over 62 percent,” said Prabowo.

Sandiaga, who at last made an appearance on camera, still did not offer his words. He simply held up his thumb and index finger.