Village Thrives with a Clean River


Residents of Jagran hamlet in Klaten cleaned and reordered the Pusur River and its surroundings. The economy of the village has flourished thanks to tourism.

Despite its scant three-meter height, the waterfall beneath a colonial Dutch stone bridge is the last hurdle to be enjoyed by adrenaline junkies participating in the River Tubing Pusur Adventure (RTPA). The RTPA is a package offered to tourists by the Pusur Community in the Jragan hamlet, Wangen village in Klaten, Central Java. The package includes white water rafting along the Pusur River in Klaten, on used tractor tire’s inner tubes that have been transformed into mini rafts. “At the waterfall we offer the Talang challenge,” said RTPA Community Chairman, 39-year-old Aris Wardoyo, on Tuesday, April 23.

If 40 percent of a tourist group’s members manage to make it past the waterfall without being thrown off the tire, said Aris, the RTPA will waive the entire package fee. Each group must have at least five people. Two packages are offered: Rp50,000 and Rp70,000 per person rides. Both options take tourists along the Pusur River, which meanders under lush trees for 1.4 kilometers with a travel time of one to 1.5 hours.

The only difference between the two packages are the meals served at the end of the adventure. Visitors who pay Rp70,000 will receive substantial meals prepared by women in the Family Welfare Movement (PKK) and iced coconut juice. Meanwhile, those who pay Rp50,000 will only be given snacks.

But both packages offer equal service. Every group is taken by car from the basecamp to the starting point, briefed and prepared, given life vests, helmets and rubber boots, tour guides and photographs of the tour.

“There was one group with 10 people, and four among them survived the Talang Challenge. No one had to pay,” said Aris. But more often whole groups fail to make it through the challenge, with all members thrown overboard as they land in the five-meter deep water.

Kunti Erna, 25, experienced the suspense. “I’m actually afraid of heights, but because of encouragement from my friends and the tour guide I had the courage to join the Talang Challenge although (I) failed,” said the visitor from Kartasura, Sukoharjo, Central Java.

Aris believes that letting visitors enjoy the tour for free is not a ‘loss’ for the RTPA Community. Although the site has been professionally managed as a tourist destination since 2015, the RTPA Community does not always have profit in mind.

“The initial goal of our community was to turn the Pusur River into an educational tool for the importance of preserving nature and the environment,” said Aris. “Like a house, a river will be damaged if it’s not maintained, and this would negatively impact the communities living around it.” 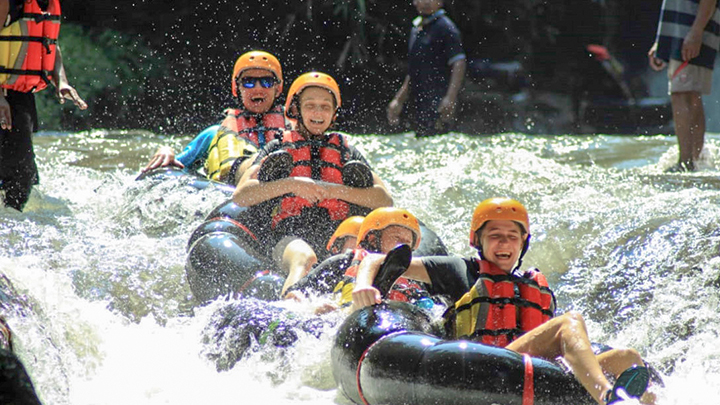 The Pusur River begins in Boyolali, a regency that neighbors Klaten. Both regencies cover the slopes of Mount Merapi. Despite its cool and clear water, the river that leads to the Bengawan Solo River was at first seen as Tulung and Polanharjo Regencies’ ‘backyard’ in Klaten, known to have numerous water tourism destinations, among other the Cokro Spring and Umbul Ponggok. “Although it wasn’t as bad as rivers in the cities, Pusur River was once a place where household waste was discarded,” said Aris. Locals would even defecate in the river.

An awareness to clean the river begin to grow in 2013, when dengue plagued the residents of Wangen village, including the Jragan Hamlet. Jragan residents worked together to prevent the dengue fever from spreading further by cleaning residential areas. But the young people took an even greater stride by cleaning the Pusur River with the help of two sets of life vests and helmets donated by Tirta Investama Klaten, a company that has produced Aqua drinking water since 2002. “The two sets of life vests and helmets were our initial capital for establishing the Pusur Community in 2013,” said Aris.

At first the Pusur Community only focused on disaster mitigation, particularly on the Pusur River. They did not imagine that Pusur would one day turn into a tourist destination popular among domestic and foreign tourists the way it is today. The river’s popularity has significantly improved the economy of local residents as well as the whole village.

For two years from 2013 to 2015, the community that now has 45 members routinely cleaned Pusur. Unexpectedly, photos and videos of their work on the river, which were uploaded to Facebook, Instagram and YouTube, piqued the curiosity of netizens. Tourists began to flock to the area  to see the Pusur River’s natural beauty. “To serve the visitors, we once had to rent life vests and helmets,” said Aris as he reminisced to the RTPA’s early days.

Because more and more tourists came, in 2015 Wangen residents agreed to professionally manage the Pusur River as a tourist destination. The money collected from visitors since 2013 was used to build facilities such as bridges, bamboo gazebos and selfie photography posts. “Now we have 100 sets of life vests, helmets, water boots, and 120 rafts,” said Aris.

According to one of RTPA’s tour guides, Rohman Shodiq, he receives an extra income of Rp400,000-500,000 every two months. “The tour guide schedule at the RTPA is flexible because the majority of the community’s members have day jobs. Once the the guides have collected Rp5 million,  (the money) then will be split,” said the 40-year-old man.

The RTPA has also improved the earnings of Wangen’s handicraft enterprises. After traversing the Pusur River, visitors can spend their time shopping at the homes of locals who produce batik bags and purses. “Some buy them for souvenirs, but others buy in bulk for resell because they’re cheap,” said Rohman.

At Rohman’s house, 20 batik purses are sold for only Rp25,000. Some Jragan residents who live close to the RTPA’s basecamp also earn more from renting out public restrooms for visitors who have completed their journey along the river. “The houses only offer contribution boxes without setting rates,” said Rohman.

The RPTA’s success pleases the Wangen village government. The village administration has no wish to take over the  community’s management. “Through Bumdes (village-owned enterprises), we will collaborate with the Pusur Community in developing the RTPA. The Bumdes will fulfill RTPA’s current needs, such as a plan to build food stands and booths for handicrafts made by home businesses,” said Wangen Village Chief Mashudi.

Mashudi said he was also proud of the ODF Village (Open Defecation Free Village) award given to Wangen last year by the regency government. “Since the Pusur River has been managed as a tourism destination, locals have no longer defecated in the river. We have also built waste management sites as a reward for residents who no longer litter in the river,” said Mashudi.