Ammo on an Ambulance


The police suspect a group of people were paid to turn the May 22 protest into rioting. Some were sent from outside Jakarta.

After leaving on Tuesday, May 21, at 8pm, the ambulance with the license plate B-9686-PCF arrived at 3am the next day at the Prabowo-Sandi National Secretariat in Jalan H.O.S. Cokroaminoto in Menteng, Central Jakarta. After carrying two new passengers from Riau, Hendrik Syamrosa and Surya Gemara Cibro, the ambulance went to Jalan Fachruddin in Tanah Abang, Central Jakarta.

At that time, the riots had moved from the Elections Supervisory Agency (Bawaslu) building in Jalan M.H. Thamrin to the Tanah Abang area. But rioters were still attacking the police using rocks, molotov cocktails and fireworks. The police drove them back using tear gas and by combing several areas. The police found Obby’s ambulance in front of the Millennium Hotel. Apparently, the vehicle was carrying rocks.

Jakarta Police spokesperson Sr. Comsr. Raden Prabowo Argo Yuwono said the rocks found in the ambulance were meant for rioters, to be used against the police. “Additionally, Rp1.2 million was found,” said Argo. As a result, the five passengers, including Obby, were brought to the police station. According to National Police spokesperson Insp. Gen. Muhammad Iqbal, the police also found several envelopes containing Rp6 million believed to be fees meant for rioters.

Obby denied there were rocks in the vehicle. He said they were only standing by in case anyone needed medical help. “I don’t know. There was only a gurney in the back,” he said. And the Rp1.2 million was meant to cover operational cost during their time in Jakarta.

The Daihatsu Blind Van Obby rode in is registered under Arsari Pratama. Aryo Djojohadikusumo, Prabowo’s nephew, is recorded as the company’s commissioner since 2008. The vehicle’s registration had expired on February 25, 2018.

Other ambulances with the Gerindra Party logo also supplied food for the demonstrators. We observed that on Wednesday, May 22, at around 11:30pm, one of these ambulances was parked around Jalan Agus Salim, Central Jakarta. There were hundreds of styrofoam boxes containing food inside the vehicle, which were then distributed among demonstrators who were sitting on the street while most of other protesters were clashing with the police.

Arsari Pratama Director Daniel Poluan said his company had nothing to do with the May 22 incident. According to Daniel, Arsari merely donated the ambulance to an organization called Kesehatan Indonesia Raya (Kesira) for medical purposes. “In essence, Arsari brought assets and lent them to Kesira. Kesira distributed to regional offices for healthcare services,” said Daniel.

Gerindra Party Deputy Chairman Fadli Zon denied that his party’s ambulances were used to transport ‘ammunition’ for rioters. He claimed that all of Gerindra’s ambulances were only used to assist victims. “I think not,” he said.

Aid also came from the Islam Reformist Movement (Garis), led by Chep Hernawan, Prabowo’s supporter from Cianjur, West Java. The police caught the driver and a helper of an ambulance with a Garis logo. The vehicle, which was seized around the Bawaslu building, was carrying bows (for arrows), sharpened bamboo, and money. According to the police, the money and weapons were distributed by the ambulance’s operator to demonstrators.

National Police Chief of Public Information Brig. Gen. Dedi Prasetyo said the money and weapons were deliberately kept in ambulances so that they would be allowed through police barricades and reach demonstrators. One ambulance, said Dedi, was even used to transport rioters. “Once they managed to pass, they immediately provoked the masses,” he said.

According to Dedi, based on the information given by caught rioters, they were paid at varying amounts. Field coordinators were paid Rp2-6 million. “The more people they brought, the bigger the fee,” he said. Meanwhile, demonstrators were paid Rp250,000-300,000 per person.

Dedi said among the paid groups were thugs from around Tanah Abang. But some rioters were from outside Jakarta. Of the 183 rioters caught in Slipi, West Jakarta, as many as 41 individuals came from Banten, 27 from West Java, 13 from Central Java, and 11 from Sumatra. 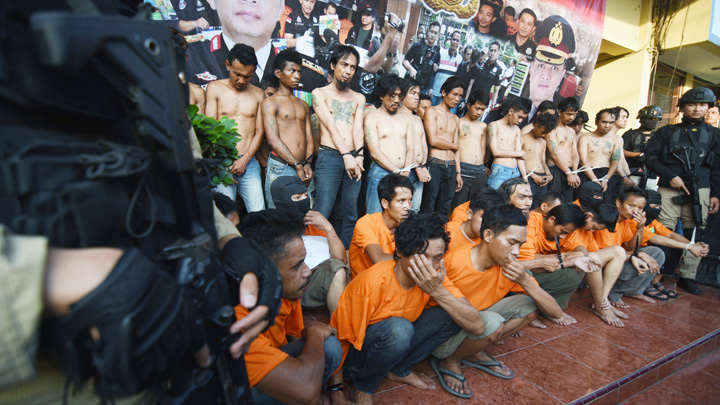 Suspected May 22 rioters at the West Jakarta Police Resort, May 23. ANTARA/Indrianto Eko Suwarso

Some rioters attacked the police because of a hoax video that went viral on social media. In the video, Police Mobile Brigade officers appeared to be shooting at a mosque in Tanah Abang while in pursuit of demonstrators. Sapto Putra Permana, 22, was angered by the video. He decided to take to the streets and fight the police without verifying the video’s substance. “I don’t accept harassment against my religion,” said the man from Radio Dalam, South Jakarta.

Unfortunately, Sapto was shot with a rubber bullet during a clash with the police in Tanah Abang. Because of the bullet injury in his left leg, he had to be treated at the Budi Kemuliaan Hospital in Jakarta.

Besides through social media, people were provoked on the streets. Dharma, a resident of the Police Mobile Brigade dormitory in Jalan K.S. Tubun in Petamburan, West Jakarta, recounted the start of the riots, which resulted in a number of cars being set on fire by rioters on Wednesday close to dawn.

Demonstrators driven back from the Bawaslu building by the police flooded the streets around Petamburan at 2am. At the time, Dharma said, rioters began burning tires on the street and pushing against the dorm’s iron gate. They were also screaming curses at boarders. “The boarders were challenged to come out. But we didn’t want to come out,” said the son of a police officer.

Without warning, someone yelled out with a loudspeaker from the direction of a mosque in Jalan Petamburan III, not far from the Brimob dormitory. “He screamed, ‘Our neighborhood is under attack! Allahu akbar!’” Dharma said. After that, the rioters grew more aggressive. “Well, then it happened.”