The Doom-sayings of Dr. Doom


Nouriell Roubini is famous for his nickname: Dr. Doom.

Born to Iranian-Jewish parent, the American economist is famous for predicting the 2008 global financial apocalypse. Roubini accurately pointed at the US property market bubble as the main cause for that crisis. Last year, Roubini once again conveyed a prediction that would make investors quake in their boots.

In his piece for Financial Times, September 2018, Roubini saw that the US economy will soon be plunged into crisis and its growth is falling. An increasingly weaker economy will encumber President Donald Trump when facing the Presidential Elections on 2020. For his way out, Trump must ride on global issues to win the support of US citizens.

After setting off a trade war with China, Roubini suspected Trump will choose Iran as his next target of confrontation. With Iran, the US’s affairs will no longer be limited to economic warfare. It will also implicate a real military conflict. Attacks on several tanker ships in the Gulf of Oman since May 6 were like signals that this last prediction of Dr. Doom will also come to pass. US Secretary of State Mark Pompeo has accused Iran as the mastermind behind the attacks. Iran has strongly denied the accusation.

Oil prices in international markets immediately shot up following the attacks, although the rise was not prolonged just yet. However, mounting tensions are sure to increase the cost of transport and insurance premiums. Oil prices that get pushed up are certainly bad news to Indonesia, which is still burdened by a current account deficit due to massive oil imports of around 1 million barrels per day. The higher the price of oil, the heavier the burden of deficit of the country.

So far, Indonesia’s balance of payments is still helped by the portfolio investment funds that are still steadily flowing in. Since the beginning of 2019, for example, foreign funds parked in Indonesian government bonds remain stable, seeing an addition of Rp57 trillion. Foreign investors also brought Rp54.8 trillion to the stock market in the same period.

Roubini’s other prediction about the weakening of US economy has temporarily brought positive sentiments to rupiah. Latest data show that the US economy is indeed starting to slow down. Job creation decelerated strongly in May. The effects of the trade war with China seems to have a backlash on the US economy instead. Trump’s agressive style in playing import tariffs as a pressuring tool against the US’s main trading partners is indeed effective. However, it could be likened to an effective nuclear weapon. The effects are uncontrollable and ultimately will hit back the US economy.

Now, markets are becoming certain that The Federal Reserve will reverse the direction of interest rate movements. Instead of holding the interest rate as is its policy direction so far, The Fed must lower its benchmark interest rate so the economy is not plunged into recession. And not only once; Deutsche Bank economists suspect that a rate cut can happen three times until the end of the year.

A lower Fed rate is an incentive to the economy. Not only positive for the US economy, the low interest rates will bring and abundance of funds flowing into emerging markets. Indonesia too will certainly partake in the massive boon. The rupiah exchange rate throughout last week has already reflected it, slowly appreciating to until Rp14,325 per US dollar on Friday 14 June. This is much better than the rates at the middle of May which touched Rp14,525.

The trouble is, the escalating tensions in the Middle East can easily reverse this positive trend. If the oil flows from the Hormuz Strait, estimated at around 16.8 million barrels per day is blocked and oil prices soar as a result, Indonesia can land in a hot mess. 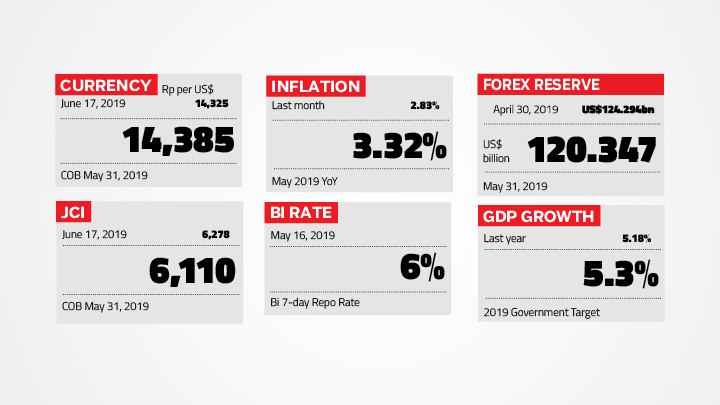