A Loud Bang of Starting Pistol


The presidential elections has ended and the dispute has been settled.

The president elect has no time to celebrate and buoyed by the election victory. President Joko Widodo, known as Jokowi, must immediately start his policy reorientation to rejuvenate the weakening Indonesian economy.

Jokowi has quite a good start for his second term after the elections ended smoothly and safely. A maliciously orchestrated riot on May 22 failed to cause the great disturbance as its mastermind wished for. It proves that for all its faults, Indonesia’s democracy is still stable.

At the end of May, global ratings agency S&P gave an appreciation by raising Indonesia’s credit rating to BBB. Foreign investment funds flowed in rapidly. The possibility of another Federal Reserve interest rate drop added to the positive sentiments in the market.

It is an irony. The faster the economy moves forward, the bigger the need for fuels, and the bigger the current account deficit. At the end the rupiah remains under pressure.

So far that deficit has been covered by the inflow of portfolio investment funds. In the short term, there may be no problems, but it is not the ideal solution. Its transient characteristic can create volatility whenever global sentiment changes. The dependency on portfolio funds as a stopgap also reflects the weakness of Indonesian economic structure since its dollar earnings do not come from real economic activities.

In short, Indonesia’s economy constantly needs a lot of help from portfolio investors to stay afloat. This circumstance will never make the economy fundamentally strong. The capital injection to financial markets also have a small trickle down effect to the economy as a whole. It will not give the direct impact to the households economy to increase households consumption.

A Financial Times survey published one month before the elections showed that majority of Indonesian household correspondents are generally optimistic about the country’s political stability. However the survey also concludes that the optimism is not supported by purchasing power at the household level.

The same applies to consumer’s demand for credit to purchase high-value items such as cars or property. It was reflected in the lower Future Borrowing Index by Financial Times which was measured at 44.9. This number is the lowest so far. Data from the Association of Indonesia Automotive Industries (Gaikindo) also shows that car sales in Quarter 1 2019 dropped by 6.6 percent year on year, compared to a positive growth at 5.8 percent in the previous year

This low appetite for credit is certainly not unrelated to the high interest rates in Indonesia, partly caused by tightening liquidity in the banking system. The overall Loan to Deposit (LDR) ratio of Indonesian banks rose to 93.6 percent on April 2019 from below 90 percent in the year before.

The continuing increase in LDR can be an early signal that the economy is under pressure. Banking liquidity is one of the ‘fuels’ that can move the economy. If liquidity tightens, economic growth will slow down. Analysts are already recalculating the target of economic growth this year. The government target of 5.3 percent seems out of reach.

Thus, there is no time for Jokowi to celebrate his victory. The Constitutional Court’s decision is a loud bang of a race starting pistol: The government must immediately run a structural economic reform before it is too late. 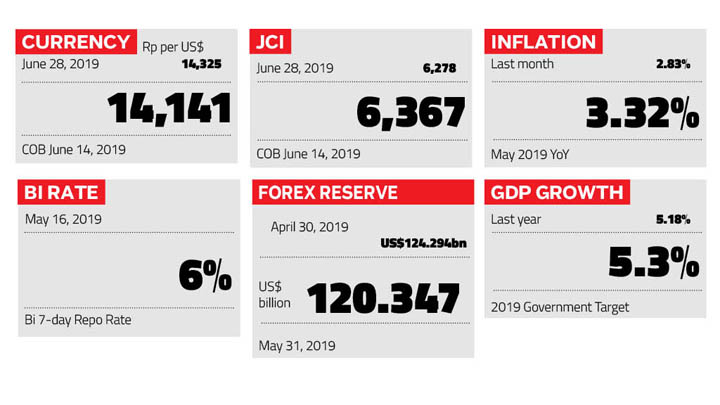