Fighting for the Workers’ Insurance Premiums


The transfer of insurance and pension program from Taspen and Asabri to the BPJS Ketenagakerjaan remains in limbo. The KPK had to intervene.

Unlike BPJS Kesehatan’s success in integrating three health insurance programs by Askes, the health ministry and Jamsostek, BPJS Ketenagakerjaan is the opposite. The government’s plan to merge the retirement fund and pension programs of Taspen and Asabri—with funds under management (FUM) of almost Rp270 trillion—is far from being materialized.

The BPJS Ketenagakerjaan, once named Jamsostek, is actually facing the threat of losing policyholders from the group of temporary employees hired by regional governments. “We are seeing some kind of approach to the local governments, where the social security for temps would be from Taspen,” BPJS Ketenagakerjaan Director of Participation Ilyas Lubis said on Thursday, July 11.

They then wrote to the administrative and bureaucratic reform ministry at the end of 2018, asking for coordination so that the ministry would not have to transfer the temps’ social security management to Taspen. “For non-state apparatus, it is taken by the BPJS Ketenagakerjaan,” Ilyas said.

Today there are more than 1 million temporary government employees who are participants of BPJS Ketenagakerjaan’s work accident and life insurance plans. A number of regional governments routinely deposit 0.24 percent and 0.3 percent of their temps’ salaries each month.

The BPJS also wrote to the Corruption Eradication Commission (KPK). Incidentally, on February 6, the two institutions signed a memorandum of understanding on cooperation and coordination to combat corruption. “The BPJS rushed here, reporting on the ministerial regulation plan,” KPK’s Deputy for Prevention Pahala Nainggolan said in Jakarta, Wednesday, June 26. 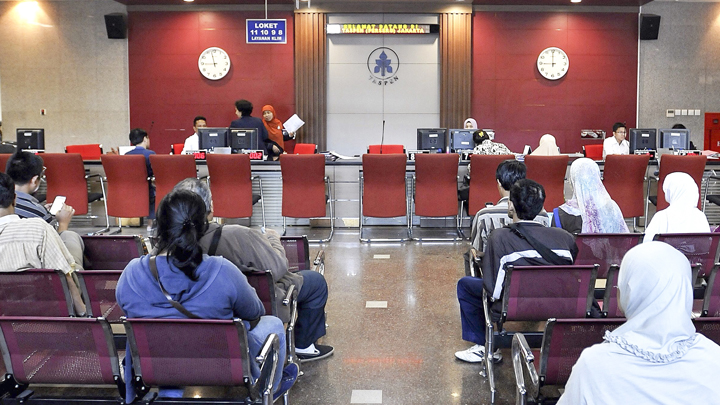 Not only to the administrative ministry and KPK, the BPJS also wrote letters to a number of local governments. In the letters, the agency said there was a potential to incur state loss if the local government transferred its social security management to Taspen. This is because Taspen’s life insurance premium is 0.72 percent of the basic salary per month, which is higher than the BPJS’s 0.3 percent.

BPJS’ letters and complaints were responded to on Thursday, May 23. Syafruddin, Minister of Administrative and Bureaucratic Reform, invited officials of BPJS, Taspen, Asabri, finance ministry, and the KPK.

According to Pahala, the meeting leader was angry with the BPJS for writing to the regional governments about the potential state loss from transferring premium management to Taspen. Pahala said that Taspen also threatened to sue BPJS for defamation.

When asked about the fuss at the meeting, BPJS Ketenagakerjaan Director of Membership Ilyas Lubis only answered briefly. “It was only a reminder, so that the field implementation goes smoothly,” he said, adding “regarding Taspen’s response, ask them.”

On July 11, Dwi Wahyu confirmed via WhatsApp that there was a meeting. “We will have another discussion with relevant agencies in the near future,” he said. However, when asked whether it was true that his boss was angry because of BPJS’ letters, the Taspen commissioner did not answer.

Meanwhile, the Administrative Bureaucratic Reform Ministry’s Chielof Legal, Communication and Public Information Bureau Mudzakir said he had not received enough information about what was discussed in the meeting. “I’ll check later,” Mudzakir said on July 11.

When met at his office on Friday, July 12, Taspen PR Manager Anne Roosfianti told Tempo the contents of the meeting. But she asked for what she said to be off the record.

THE fuss about the management of work accident and life insurance for temporary employees revealed an even more convoluted dispute over workers’ social security since 15 years ago. After receiving a report from the BPJS Ketenagakerjaan at the beginning of 2019, the KPK investigated the issue and found that “the national social security system has deviated very far,” Pahala Nainggolan said.

The story began on October 19, 2004, when the Law on the National Social Security System was issued. Among its principles was that it had to be a non-profit system. Seven years later, the Social Security Administrators Law was born. One of its contents was to dissolve Askes, which has been handling the health insurance of the civil, military and police apparatus, and merge all health insurance programs into the BPJS Kesehatan.

The BPJS Law also instructs Asabri and Taspen to transfer their social insurance and retirement fund programs to BPJS Ketenagakerjaan by no later than 2029. The transition procedures would be regulated by government regulations.  “The BPJS Law is as strict as that. It meant for Taspen and Asabri to make a roadmap for merging,” Pahala said.

But instead of making a roadmap for the transition, Taspen drafted a proposal to revise the National Social Security System Law and the BPJS Law so that the transfer would be canceled. They also proposed for the establishment of a BPJS for civil servants. The plan was contained in the 2014-2019 Taspen roadmap obtained by the KPK. Asabri also made a similar road map. “In essence, Taspen and Asabri do not want to merge with BPJS Ketenagakerjaan,” Pahala said.

Asabri Corporate Secretary Desy Ananta Sembiring admitted that the company made such a road map. Asabri still hopes to propose changes to the BPJS Law as well as the issuance of the BPJS Law on the Indonesian Military (TNI) and the Police. According to Desy, the army and police are high-risk professions. “They need specific guidance that is different—mentally, spiritually, and welfare-wise—from that of state apparatus or workers in general,” Desy said on Thursday, July 11. The welfare development that is appropriate for the army and police, Desy added, must go through Asabri.

Meanwhile, Taspen PR Manager Anne Roosfianti provided explanations regarding her company’s roadmap, which is different from the BPJS Law. But again, she refused to be quoted.

WITH the pension and retirement programs’ issues remain unsolved, another problem arose. In 2015, Pahala Nainggolan said, two government regulations were issued at the same time. The first is Government Regulation (PP) No. 70/2015 on Work Accident Insurance and Life Insurance for State Civil Apparatus, and the second is PP No. 102/2015 on the social insurance for TNI and Police officers, as well as employees of the Defense Ministry and the National Police. The two regulations mandated Taspen and Asabri to manage life and work accident insurance plans for civilians, members of the army, and police officers.

However, two years earlier, a regulation had been issued. It was the Presidential Regulation No. 109/2013 on the Stages of Participation in the Social Security Program, which was mandated by the National Social Security System (SJSN) Law and the BPJS Law. Article 5 of the presidential regulation stipulated that state employers must register all workers to BPJS Ketenagakerjaan’s work accident insurance program and life insurance plans by no later than July 1, 2015. “Two years ago the Supreme Court ruled that the life insurance and work accident insurance managed by Taspen did not violate the SJSN and BPJS laws,” Pahala said.

The KPK then calculated the impact of social security disputes involving the three agencies. The result: there is potential for wasteful state budget.

Today, the government pays two insurance premiums for work accident and life insurance to Taspen and BPJS Ketenagakerjaan. The government as the employer pays 0.24 percent and 0.72 percent of the participants’ salary to Taspen. To the BPJS, the government pays 0.24 percent and 0.3 percent of participants’ salaries. The institutions that pay for these premiums include Bank Indonesia, the Financial Services Authority (OJK), the Ombudsman, and the KPK itself.

According to the KPK’s calculation, the state could also end up paying more premiums: Rp722 billion per year. The cost comes from the life insurance premiums, which is higher than employment BPJS premiums. Based on these findings, the KPK plans to make a recommendation to the president to resolve the workers social security problem.

Dede Yusuf, the House of Representatives’ Commission IX chairman, said the  chaos would have not occur if the government had issued a regulation on the procedures for transferring Taspen and Asabri’s pension and retirement programs to the BPJS. The government, Dede said, must now intervene by involving several ministries and appoint a team to draft the regulations on the transfer. “So far, it seems that no one has been appointed yet,” Dede said on Thursday, July 11.

Cabinet Secretary Pramono Anung did not answer when asked which ministry or institution would be the initiator of the government regulation.