NOT long after the plan to form a superholding company came under the spotlight in a presidential debate in mid-April, State-Owned Enterprises (SOEs) Minister Rini Soemarno quickly set to work. To fulfill the promise made by President Joko Widodo in the presidential debate, Rini issued a decree to form a review team for a superholding company on May 7.

Team members meet almost once every other week at the SOEs ministry in Jalan Medan Merdeka Selatan, Jakarta. The last meeting to discuss the superholding initiative was held in early July, to finalize a concept for the institution that will have authority over state-owned holding companies. The meeting was chaired by the team’s deputy chairman, Hambra Samal, concurrently the SOEs ministry’s deputy of business infrastructure.

University Indonesia’s Economics and Business Department Dean, Ari Kuncoro, was among those present. At the meeting, said Ari, SOEs Ministry Deputy of Mining Businesses, Strategic Industries and Media Fajar Harry Sampurno gave his input on superholding organizations. Ari was asked for his insight on the roles of a superholding to boost export, suppress imports, and strengthen inter-SOE financing.

Not two months later, a concept was virtually ready for a superholding company for SOE holdings. “Before the decision letter was issued, we had already routinely met for informal discussions,” said Ari at the University Indonesia campus in Salemba, Jakarta, on Tuesday, July 16.

Rini recruited a number of practitioners and academicians to finalize the superholding concept. Experts from the Gadjah Mada University in Yogyakarta include business law professor, Nindyo Pramono; law expert Zainal Arifin Mochtar, economics and business expert Rimawan Pradiptyo; and chairman of the People’s Economics Study Program, Revrisond Baswir. Meanwhile, besides Ari, from the University of Indonesia there is the professor of economics and business, Rhenald Kasali.

The new institution will have a board of commissioners made up of a maximum of nine people. The board of directors will include professionals with international experience, and the chief executive officer’s position equal cabinet members. Lastly, above the commissioners and directors, there will be a steering committee led directly by President Jokowi. 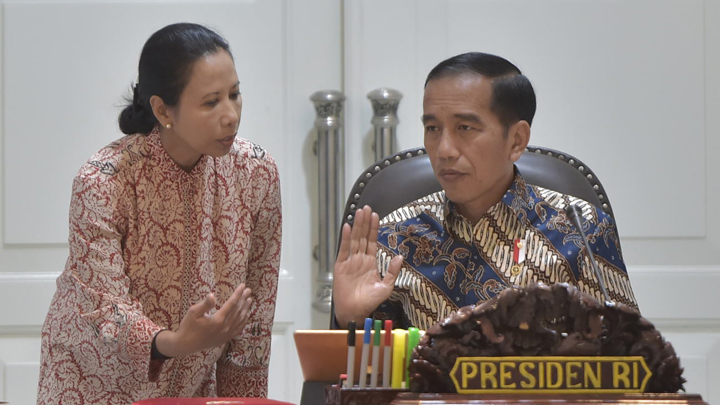 The SOEs ministry’s move to accelerate the superholding plan emerged amid a plan to replace the SOE minister. As a strategic ministry that manages Rp8,207 trillion in assets, the minister’s seat is a coveted one, as was the case in the first Working Cabinet. A number of officials in Jokowi’s supporting coalition say they are preparing to propose their own people to replace Minister Rini Soemarno.

The minister’s seat again became a hot topic after Rini fell under the spotlight. In a cabinet meeting on Monday, July 8, Jokowi reminded Rini as well as Energy and Mineral Resources Minister Ignasius Jonan of the country’s high oil and gas imports. He reprimanded them, asking them to be more careful in regard to oil and gas imports.

While Rini’s replacement is being discussed, the SOEs ministry aims to complete the superholding within two months so that it would not have to be deliberated by new House of Representatives (DPR) members elected in the 2019 elections. In fact, the SOEs ministry and the current period’s DPR Commission VI, whose term will end in September, have discussed the superholding several times. Among others, Commission VI oversees SOEs affairs.

If deliberations on the superholding go smoothly, there will no longer be an SOEs ministry in the new cabinet. “Bu Rini’s wish is that there will be no SOEs ministry once there is a superholding,” said Fajar Harry Sampurno when we met him at the Bung Karno Stadium in Senayan, Jakarta, on Friday morning, July 19. Fajar added that the President has already given the green light because the possibility was already mentioned in one of the presidential debates.

Although the SOEs ministry will be eliminated, nine commissioners will be appointed for the superholding. “Perhaps the scenario is to place Rini’s trusted people there as well as to improve SOEs’ financing capacity,” said Institute for Development of Economics and Finance economist, Bhima Yudhistira Adhinegara.

The government will tie in the superholding’s establishment with the deliberations on the revision of Law No. 19/2003 on State-Owned Enterprises. The revision has been included in the 2019 National Legislation Program. Fajar says regulations concerning the superholding will be included in the SOE law revision, an initiative of the DPR. At the moment, a draft revision has been completed and he is optimistic that the legislation process will be quick.

DPR Commission VI member from the Golkar Faction, Dito Ganinduto, confirms that the SOE law revision was the DPR’s initiative and has been entered into the 2019 National Legislation Program. President Jokowi has also sent a letter to DPR leaders to begin deliberation.

Dito, who was chairman of the working committee for the SOE law revision, at first planned to schedule a meeting. In the first stage, the parliament was to invite experts. But the plan was canceled. “There was no time,” he said on Friday, July 19. To speed the revision process, the government should have immediately recommended a problem inventory list.

Fajar says the list is currently being drafted. The team that has been working on the list since early July will immediately deliver it to Senayan, the parliament complex. Unlike the revisions of other laws, which are initiated by the government, this time the government will only propose important points. He is optimistic that the deliberation process will not take up too much time. “We only need to say which elements aren’t suitable, to be discussed.”

Fajar explained that the SOEs ministry is accelerating the forming of a superholding only for the sake of competition in the international market. So far, the SOEs ministry has not been able to consolidate SOEs. “We’re a government institution, but this is a business affair.” Despite a total SOE asset of Rp8,207 trillion, business-wise, the number means little. Consolidating under a superholding would mean more assets.

“Forming a superholding will strengthen SOE’s balance so that we can invest according to the needs of the country,” said Rini Soemarno, last Friday.

According to Fajar, it is unnecessary to wait for all sectoral holdings to exist in order to form a superholding company. Both can proceed simultaneously. At this time, six holdings have been formed, among others, in the mining, oil and gas, fertilizer, and cement sectors.

In fact, the idea to form a superholding had already emerged during President Suharto’s leadership. At the time, SOEs Minister Tanri Abeng (1998-1999) created a blue print for SOEs. The government planned to have no SOEs ministry by 2010, as it would have been transformed into a national or SOEs superholding.

But Ari Kuncoro sees some differences. “Before, there were no functions for raw materials, more on financing,” he said. In the current concept, businesses are not only seen as activities, but as supply chains. Industry Kereta Api, for example, will not only be selling products but will also offer maintenance workshop services. “Who can negotiate with the market? Well, the superholding,” he said.

Rhenald Kasali added that in the next stage, SOEs will shift from comparative advantage to competitive advantage, which is why SOEs must function as motors that run the economy with strong capital in various sectors. Because of this, he added, the concept is not for several sectoral holding companies but rather for one solidly integrated holding.

But Bhima Yudhistira Adhinegara warned that a superholding concept is not automatically good. “We’ll check current holding companies, are their profits improving? What’s happening is instead subsidiaries are covering for their holding’s losses,” he said.

Before the superholding plan was discussed in the parliament, government’s primary supporting party, the Indonesian Democratic Party of Struggle (PDI-P), had already shown resistance. PDI-P Secretary-General Hasto Kristiyanto is concerned that the institution would someday be vulnerable to crisis after some financial engineering. “Before you know it, the country’s wealth can disappear,” he said.

It is for this reason, Hasto added, that PDI-P disapproves of the plan to form a superholding company, which will eliminate the role of the SOEs ministry. “A state-owned enterprises ministry is still needed because it details the country’s economy,” he said. His party has given its input to President Joko Widodo on the plan to establish the new institution.

Another concern is that the superholding format would ease the transfer of shares without supervision, when SOEs have varying roles. “Some dominate the market and others provide public services.”

DPR Commission VI from the Hanura Faction, Inas Nasrullah, says the superholding concept must have the parliament’s approval, especially because one ministry will be liquidated. He is unsure that the affair could be resolved at the end of the DPR 2014-2019 working period.

The trouble is that legislators will enter a recess period from July 25 until August 16, followed by overseas visits on August 18. “Time is running out. The September target won’t be achieved,” said Inas, adding that it is possible that by the time the government has delivered its problem inventory list, current Commission VI members will have been replaced by new parliament members.

Meanwhile, Dito Ganinduto recommends that the government completes the formation of sectoral holding companies, which have been planned for a long time. After that, all holdings can be integrated into one superholding. According to the Golkar Faction member, the option of accelerating the establishment of new institution are not great because the current cabinet will soon end. He recommends deliberating on the superholding plan once the new cabinet is formed.