East Flores is launching a serious campaign against stunting. The regent as well as village regulations threaten those in violation with various sanctions.

JUNIOR Devalno could not sit still as he sat on his mother’s lap. The one-year-old son of Marselina Lin Narek seemed to tease her mother and Fransiska Prada, a midwife in the Kimakamak village, who sat next to each other. “He is in the focused PMT (food supplement) program for stunted children,” said Fransiska, known to friends as Siska, on July 19.

Marselina says she only found out that her son was stunted in June. At the time, Junior was around 70 centimeters tall and weighed 7.5 kilograms. The Kimakamak resident said she gave her son only breast milk for six months, and after that Junior began consuming additional food. The 22-year-old woman was surprised when she learned that her son was stunted, meaning his height was below the median height due to malnutrition.

When the Focused PMT (PMT Terfokus) program, which concentrates on stunted toddlers under 2 years old, began in East Flores on July 1, Junior became a participant. In the Kimakamak village, West Adonara subdistrict, East Flores Regency, East Nusa Tenggara, 5 toddlers under 2 years old were found to be stunted. Every day, the five children receive lunch, afternoon snacks and dinner, which is given at around 5pm. “Village midwives, health cadres and mothers of stunted toddlers cook together,” said Siska.

In August, Junior is 75.6 centimeters tall and weighs 8.5 kilogram. Many children who are in the program also grow well. On average, they gain one ounce per week.

Over the past year, the East Flores Regency has been paying special attention to stunting. On November 16, 2018, East Flores Regent Antonius Hubertus Gege Hadjon declared the Gempur Stunting (Battle Stunting) movement, aiming for a stunting-free regency.

The issue of stunting was not much discussed in the past. Furthermore, not many living in the regency knew about the condition. The government and non-govermental organization Social Studies and Development Foundation (YPPS) joined hands in making stunting a priority in East Flores’s development.

According to YPPS Director, Melkhior Koli Baran, his organisation is aided by the international NGO, SNV, in launching the campaign against stunting at the end of 2016. The health office welcomed the initative, especially because East Nusa Tenggara had the highest stunting ratio at around 40 percent.

As it happens, “The regent has a mission to save the youth,” Melkhior said, and, “If you want to save the youth, it must begin from pregnancy, birth without stunting, good brain development. And in the future (we will) have a quality generation.”

The East Flores government began to act, especially after the central government declared a stunting prevention campaign in September 2018. The people were invited to join the movement, including church communities.

Based on August 2018 data, 32 percent of 17,227 children under five in Flores were stunted. According to Regent Antonius and Melkhor, this great number has not only been due to poverty. “But behaviors or patterns in life,” said Antonius. For example, sometimes parents pay inadequate attention to their children’s nutrition despite having the means to provide nutritious food.

A massive and integrated effort has been launched since the November declaration, both to prevent stunting and to manage existing cases. This is why the program does not only target children but also pregnant women. Even couples about to marry are given information through matrimonial catechism at the church. “Essentially, (we) fight stunting with whatever we have,” said Antonius.

Under the program, stunted children under two years old are given additional food, namely lunch, snacks, and dinner given in the afternoon for 90 consecutive days. Most of the ingredients are local foodstuff, such as sorghum, moringa, fish, and eggs. Coincidentally, the East Flores government already had a local foodstuff diversification program. 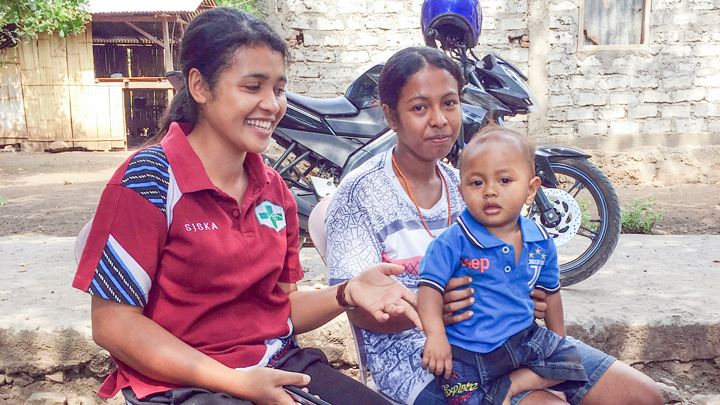 At the same time, Antonius also issued a regent’s regulation to strengthen  the management and prevention of stunting in East Flores.

Naturally, the path to a stunting-free region did not become smooth overnight. One of the hurdles is budgeting. According to East Flores Regent Antonius, the government does not have a special budget for stunting. “We are using  the budget we have.”

Some of the health operational funds from the central government has been used to fund the program. Villages are also asked to allocate a budget. Under the regent’s regulation, village chiefs are instructed allocate 20 percent of their empowerment budget for an integrated effort to manage and prevent stunting.

This directive is in line with Minister of Villages Regulation No. 16/2018, which regulates how budget is allocated to prevent stunting, from improving nutrition, food resilience, to the supply of clean water and sanitation.

At first, some government officials under him frowned when discussing the budget, but in the end all institutions took action. Some were even moved to act swiftly. The Waiwadan community health center (Puskesmas) and villages under its jurisdiction in the West Adonara subdistrict is one example. In August last year, the Waiwadan Puskesmas recorded 516 of 1,233 children in its work area as stunted. In June this year, the number had already declined to 318.

Waiwadan Puskesmas has indeed been working hard. “We have the gerbatim taksabar innovation,” said Nikolaus N. Kopong, chief of the puskesmas, referring to the cross-sectoral team to eradicate stunting in West Adonara.

Besides giving additional food, the puskesmas is also mobilizing village midwives to frequently monitor the conditions of stunted children and pregnant women. Teenagers are also involved in a program aimed at adolescents. “We give [them] iron supplements,” said Nikolaus.

Student council at schools (OSIS) are also enlisted by using a WhatsApp group that allows puskesmas staff to send messages with health information every week. OSIS activists then circulates these messages among their peers.

At the same time, village administrations are also taking action. Kimakamak, for example, has boosted its health budget, including for managing and preventing stunting, to around Rp50 million. “It used to be Rp30 million,” said Kimakamak village chief, Hendrikus Eko.

In June, the Kimakamak administration issued a regulation on the health of women with children, newborns, and children (Perdes KIBBLA). Many areas are touched on under the regulation, for example, a pregnant woman must report before her pregnancy reaches 3 months,” said Hendrikus. “No births at home.” Additionally, those with children under five must visit the community health center every month.

The village government is serious in its war against stunting. Their regulation names various sanctions against villagers who fail to comply. For example, said Hendrikus, a woman who has past the first trimester of pregnancy and has not reported will be given a fine of Rp100,000.

East Flores continues to act together. By May this year, stunting had already declined to around 26 percent. “The goal is to no longer have stunting in East Flores by 2023,” said Regent  Antonius Hubertus Gege Hadjon.