The Price of Education


Some grade and middle schoolchildren in Sungai Kura live in wooden huts in the vicinity of their school without any parents around. They refuse to bow down to obstacles in their quest to get an education.

When she started elementary school, Nadia had no choice but to live apart from her parent. SD 26 lies some 12 kilometers away from her hamlet, Lebuk Lantang in Riam Batu village. This hamlet lies in the farthest point of Tempunak subdistrict at the foot of the Saran Hills. The hilly terrain and abysmal road conditions, pockmarked with potholes and dangerously slippery during the rainy season, make it difficult for a schoolkid to do return trips home each day. Moreover, her parents cannot afford the time to bring and fetch her as they are busy working in the fields from early morning to keep food on the table for their family.

Nadia now lives in a wooden hut measuring about 3 x 3 meters and located on land owned by the school. At the start of grade school, she lived with her uncle, who at the time was in 3rd grade. Nadia was very sad. “Other kids had a parent waiting for them, but not me,” she said, sitting on a terrace of her homestay in Lebuk Lantang and talking to her visitors at end of June. Her mother had only been able to come for two weeks to settle her in. Meanwhile, many of her friends had their mothers staying with them until they reached grade 3 or 4.

Nadia’s mother, Albina, stated that it would have been difficult for her to stay with her daughter in the little hut. “I have so much to do here, and I also work in the fields,” said the 33-year-old.

Her daughter, now 12, lives together with her younger sister, Lusiana, who is in 3rd grade. The two go home every weekend. On Sunday evenings or Monday mornings, they return to their hut bringing enough food supplies for a week. Usually, three kilograms of rice grain and vegetables. If it is raining or the road is in a sorry state, Nadia, Lusiana and their other friends also living in huts in the school’s vicinity resort to walking the entire distance. 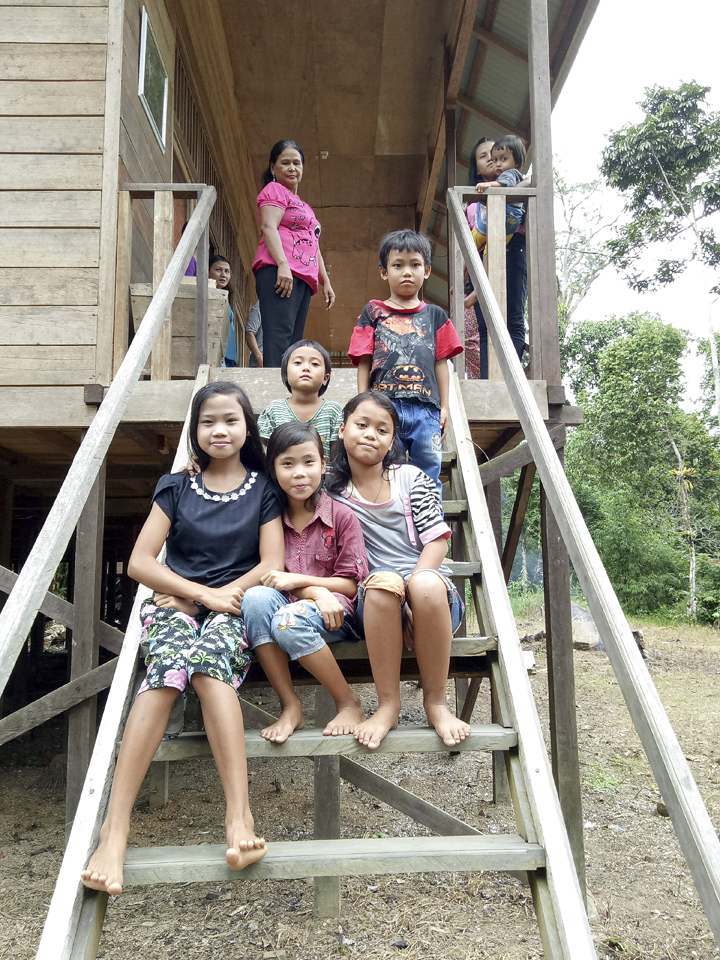 To supplement her pocket money for food and extra lessons, Nadia sometime takes on jobs after school. Sometimes she loads sacks of sand on her back for construction work, other times she hacks away brush and tall weeds from peoples’ fields.

Nadia, who wants to be a teacher when she grows up, is not the only one living such a hard life to obtain an education. Many kids from Lebuk Lantang and other hamlets carve out a tough existence to be able to go to school. One of them is Bela Savira. The 15-year-old is in year 9 at Tempunak State Middle School (SMP) 8, located in the same complex as the Sungai Kura Elementary School.

Bela has also been living in a hut since grade 1. But in her case, her mother, Selpina Pinot, stayed with her until she was in Grade 4. Now she lives with her sister—a student of Sungai Kura School—in that hut. She plans to go on to high school after finishing middle school. “If we have the money,” she added. Bela also wants to be a teacher after high school.

Bela’s parents, who are rubber tappers and fieldworkers, said they plan to do their level best for their offspring to continue their education.

According to Frida Yanto, 36, the hamlet chief of Lebuk Lantang, all the kids in his hamlet are forced to ‘fight’ to continue their schooling. Most of the younger kids elect to attend the SD Sungai Kura. Others go to the elementary school in Lanjau hamlet in Riam Batu, some three or four kilometers from Lebuk Lantang.

SD Sungai Kura, said Frida Yanto, is of better quality, hence its popularity, and the students may build their own simple living quarters in the school grounds.  Despite saying this, he himself sends his two children to the Lanjau State Elementary School 22. “Sometimes I drop them off, sometimes they walk,” said Frida, who is a farmer and owner of a six-hectare plot of land.

There are around 15 middle school-aged youngsters in the village, some attending SMP Sungai Kura and others, SMP Gurung Mali. The nearest high school (SMA) is in Kupan Jaya, about 20 kilometers from Lebuk Lantang. Most kids choose to attend high school in the town of Sintang, some 80 kilometers away. “Around 70 percent of the children here are in schools,” said Frida Yanto.

It was not easy to contact the Principal of Sungai Kura Elementary School, Franciska Susilawati. “Please wait ‘til I’m in a spot with a good signal,” she texted. We could finally communicate, once she had reached a spot with a signal or was on hilly land.

The 40-year-old talked about the Lebuk Lantang children living in the huts around the SD Sungai Kura and SMP Tempunak. Currently there are 17 huts, including the ones resided in by Nadia and Bela and their sisters. Only two of the huts have parents residing there. “They are from Lebuk Lantang and Entebah (in Melawi regency),” said Franciska through a text in September. In total, her school has 127 students from several villages.

She told us how wooden huts in the vicinity to accommodate students have been around since the school was established in 1958. “People who live far away from the school wished for their kids to get an education, and so they built little wooden domiciles near the school,” she said.

People who build huts there are not subject to rent, but they need to erect the constructions using their own resources. Once their child graduates, they may sell the hut to another family whose child attends school at SD Sungai Kura or SMP Tempunak.

Despite living on their own, the grades of these children can compare well to children living with their parents in their own homes. Nadia, for example, achieved 3rd ranking when in grade 5. Bela Savira was highest in her class. An extra advantage, “They (the children living alone) are much more independent,” said Franciska.

The regent of Sintang, Jarot Winarto, related how residential huts for schoolchildren in a school’s vicinity are not only a Sungai Kura phenomenon, but is a feature of most of 22 single-complex SDs and SMPs in Sintang. But there are different formats. Some huts are communal projects, some built by the parents, while others were built using the village fund.

The number one man in Sintang admitted he faces a major issue in the education sector. “We have a double burden, of accessibility and quality,” he said in September.

To overcome the issue, said Jarot, the government is pushing the Teacher’s Kiat program (an acronym for kinerja and akuntabilitas, meaning performance and accountability). This is a comprehensive program to improve education in remote and ‘left-behind’ areas. Teachers in these ‘difficult’ places receive a bonus payment doled out based on individual performance. Aside from that, “We are also boosting the involvement of the three pillars of education, the school, the school committee, and the local community alongside the village administration.”

Although at the beginning, the huts in the vicinity of the same-complex SD Sungai Kura and SMP Tempunak were constructed by parents, now some village administrations help to improve the facilities.  “We allocated the village fund for the development,” said Jarot. “The Riam Batu village will soon put in a solar cell unit to power the huts, while the Sungai Kura (Benua Kencana village administration) will build the toilets.”

He added that recently, the government had also repaired the road connecting Lebuk Lantang and Sungai Kura. “This is in line with the resolution to overcome those problems,” said Jarot. “We cannot allow the children of this area to drop out of school.”