A mid the deliberation process for the capital city’s budget, Jakarta Governor Anies Rasyid Baswedan received Sri Mahendra Satria Wirawan at the former’s office on Friday, November 1. According to Anies, the head of the Regional Development Planning Agency (Bappeda) provided him with an explanation of the 2020 Jakarta Budget (APBD) that has been widely discussed on social media as of late. “He chose to resign,” Anies told Tempo on Friday, November 8.

After meeting with Mahendra, Anies and his subordinate held a press conference. Mahendra told journalists why he chose to resign, namely that the Jakarta government needed to improve its performance. “So that Bappeda’s acceleration can be improved,” he said. Anies appointed Deputy Governor for Population and Housing Control, Suharti, as acting Bappeda chief.

Head of Tourism and Culture Office, Edy Junaedi, was another official who stepped down following the controversy. In his tweet, William said the Jakarta administration was also planning to pay five influencers Rp5 billion to promote tourism in Jakarta.

After William exposed the glue budget, other oddities in Jakarta’s 2020 draft budget priorities and ceiling (KUA-PPAS)—a stage that precedes the draft regional budget formulation—were revealed. The Indonesia Corruption Watch (ICW), for example, found that the draft budget for the purchase of Aica-Aibon glue was, in fact, much greater, at Rp126.2 billion. The ICW also highlighted the budget for purchasing laptops at Rp238.6 billion and paper at Rp212.9 billion. “The budget is for the operational costs of education,” said ICW researcher, Almas Sjafrina.

Governor Anies had actually instructed the governor’s team for development acceleration (TGUPP) to find and correct budgeting oddities. Anies then relayed TGUPP’s findings in a meeting on October 23. He emphasized the purchase of pens at Rp635 billion, paper at Rp213 billion, printer toner at Rp407 billion, and printer ribbons at Rp43 billion.

The investigation was also performed due to a letter from the finance ministry on revenue sharing funds that have not been liquidated, in the amount of Rp6.39 trillion. As a result, the budget posture changed from Rp95.9 trillion to Rp89.4 trillion. “So not merely (about) data entry. That’s too micro,” said Anies.

Despite TGUPP’s investigation, suspicious budget items still made it through past the DPRD. DPRD member from the Indonesian Democratic Party of Struggle (PDI-P), Ima Mahdiah, says there are budget items in the amount of Rp2.4 trillion that need to be studied. The amount is dispersed throughout 27 budget components. For example, the purchase of sand at Rp52.1 billion and the purchase of pens at Rp633 billion for middle school and vocational school operational cost in the Central Jakarta Area 2 education office. “These findings are in the most recent budget document,” said Ima.

These irregularities were also mentioned in a Jakarta DPRD Commission D meeting. Gerindra politician, Syarif, also took issue with several items of expenditure that he feels are too expensive. He mentioned the reorganization of community units (RW) in poor areas at Rp600 million. When accumulated, the total budget for the endeavour would reach Rp43.8 billion. Last year, the same item was given a budget of less than Rp400 million. Syarif questioned the 50 percent increase.

Governor Anies Baswedan says he does not want to take a defensive stance over the various findings of other institutions, including in response to the accusation that the TGUPP showed a weak performance while investigating the budget. According to the governor, it is possible that one group will call a budget item irregular, but another group may not do the same. He invites anyone interested to join the legislative body’s budget deliberations. “It is also their right if they want to blamestorm during the discussion,” said Anies.

Outside the exorbitant expenditure, budget deliberations were halted because DPRD members felt the government did not deliver a consistent version of the budget. PSI Faction Chairman in the Jakarta DPRD, Idris Ahmad, says the government’s data according to the handouts given to DPRD members often differ from the data presented by the regional government during commission meetings. National Mandate Party (PAN) Faction Deputy Chairman, Zita Anjani, even claims she has never seen the details of the budget under deliberation with the government. “Some DPRD members received it, some did not,” said Zita.

JAKARTA’s budget planning has been in progress since February, through deliberations at the neighborhood and community unit (RT/RW) levels and development planning deliberations, which are done in stages. Anies claims that the recent troubles occurred because the electronic, or e-budgeting, system is not in sync with the budget planning system. As an example, he said results of the neighborhood and community discussions are not automatically connected to the e-budgeting system used by the government. 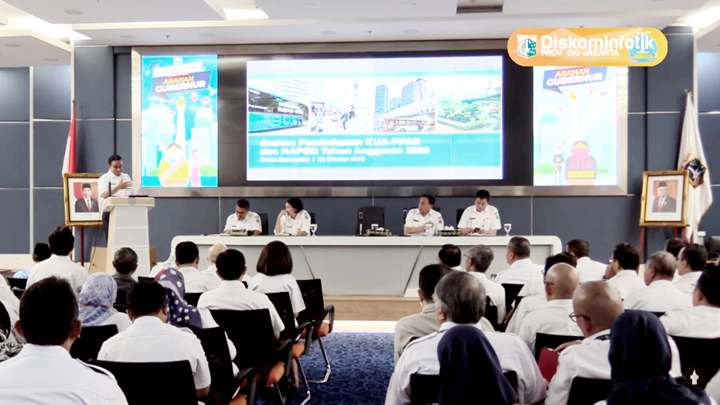 According to Anies, deliberations to development plan, which are performed in stages, must be manually entered into the e-budgeting system. Despite the many people involved, he said, there is always potential for irregular items to go through because there are 39,000 budget items that must be entered. On the other hand, the e-budgeting system cannot track the person entering the data when there has been changes made to the budget. For example, after someone entered the Aica-Aibon glue purchase for Rp82 billion and proceeded to revise the entry, the system could not trace the activity. “That’s how the system works,” said Anies.

Anies’s claim was dismissed by a City Hall official who showed Tempo the e-budgeting system. After a budget item is entered according to the deadline, the Bappeda will lock the item so that the entry cannot be revised. Before the item is locked, the identity of the e-budgeting account owner who revised the budget will be clearly displayed along with the date, hour, and minute of the revision. The system will also show the owner of the account who performed the most recent revision.

Tempo compared the Aica-Aibon glue entry at the West Jakarta Area 1 education office to a similar budget item in 2019. An official showed an operational cost provision for state elementary schools in 2019, where the Aica-Aibon units were entered. Last year, the budget for this allocation was Rp73.9 billion with over 10 budget components.

Of the amount, three components that took up the most budget were maintenance for educational facilities and training, at Rp9.4 billion; stationary at Rp5.1 billion; and teaching aid/practical activity provisions at Rp3.3 billion. According to the same official, the education office head should have been able to use last year’s activity as a reference for budget components so they would not be merely entering components to spend the budget allocation.

Anies admits that there has been indolence among his subordinates when it comes to entering components to an activity. “Some choose one or two items to spend the budget allocation.” Anies says the e-budgeting system cannot differentiate whether such things are mere errors or if they come from ill intentions.

Out of the budget entry, the e-budgeting system actually provides tiered monitoring. In the system that Tempo had the opportunity to observe, the budget entry process from March 27 until July 3 covered seven stages. Among these stages are Work Plan Entry Stage I and II, Supervision Stage, and the entry for the Supervision of Draft Public Policy for Budgeting. The official who showed Tempo the e-budgeting system said each stage was monitored by the regional budgeting team comprising relevant offices, the regional inspectorate and Bappeda. This is why the regional budgeting team was able to monitor budget components entered by related offices.

Anies says he has, in fact, discovered problems in his administration’s bureaucracy. But he chose to resolve the problems internally. “I don’t have an intention to turn this into a political problem,” said the former education and culture minister.

VARIOUS groups feel that the capital city’s budgeting polemic happened because Anies did not divulge the draft budget priorities and ceiling. PSI’s Faction Chairman, Idris Ahmad, for example, says the draft budget should have been made public so that the people would be able to participate and monitor. “It must be opened to push public participation,” Idris said.

Today’s situation is unlike Basuki Tjahaja Purnama’s term in office as Jakarta’s former governor. During his leadership, the public was able to learn the budget planning process starting with development planning deliberations. “It can already be (accessed), everything is publicized,” Basuki told Tempo.

Jakarta Secretary Saefullah dismisses the accusation that the current Jakarta administration has not been transparent with this year’s budget planning. “What we are doing now is exactly what we did before,” said Saefullah.

Anies says budget irregularities occur every year, including when Basuki led Jakarta. For example, he said, in 2017 there was an expenditure for chalkboard erasers in the amount of Rp53 billion. According to Anies, budget entry mistakes happen because bureaucrats believe there will be revisions during deliberations with the DPRD. Anies chooses not to announce the errors found by the government’s team to the public. “What would be the purpose of announcing? When we find problems, what we want is to resolve them.”

Neither is he willing to make early-stage draft budget public. The new draft budget will only be made public after it is approved by the DPRD. “Because (otherwise) there would be a commotion,” said the governor.