Anies Baswedan sees Jakarta’s e-budgeting system as flawed. The DPRD launched a battle against former governor Basuki over the system.

GAGAT Sidi Wahono remained quiet as he listened to Joko Widodo and Basuki Tjahaja Purnama’s worries at the Jakarta City Hall in early 2014. To Gagat, who had just finished presenting the e-budgeting system he designed, Jokowi and Basuki—then-governor and deputy governor, respectively—spoke about a priority program that suddenly disappeared before it was taken to the Regional Representative Council (DPRD). The program had, in fact, been thoroughly deliberated on during the planning stage.

According to Gagat, Jokowi also explained to him the problem of ghost projects, namely, projects that are unapproved or even scratched from the list but still appear regardless. “Pak Jokowi was worried about ghost budget items, expenditures that emerge out of the blue,” the information technology practitioner told Tempo on Thursday, November 7. Gagat then relayed Jokowi’s worry during a discussion with members of the technical team, which consisted of around 10 individuals.

Prior to the Jakarta meeting, Gagat and his team had helped develop an electronic system for planning the Surabaya city government’s budget in East Java. Surabaya Mayor Tri Rismaharini says she developed the electronic system Gagat pioneered to support budget planning. By adding other systems, such as electronic planning, Risma claims she has been able to save up to hundreds of millions of rupiah in budget.

Gagat’s team began modifying the system used in Surabaya to meet Jokowi’s wish to eliminate ghost projects. The system designed by Gagat and his team began operation during the drafting process for the 2014 Jakarta regional budget. Around that time, Basuki succeeded Jokowi, who had been elected president.

To improve the system, Gagat’s team applied a tiered budget entry system, from the urban community administration (kelurahan) level up to the provincial government level. The team also installed a special login function for each regional working unit (SKPD), to find out who proposed a certain project and learn about the changes made by all account owners to project items. According to Gagat, these additional systems would be able to eliminate the potential for state budget misuse. “If an SKPD enters an odd budget item, it will certainly be immediately traced,” said the Airlangga University graduate.

Gagat’s team also revamped the budget planning model. Prior, the system used a package format, without activity details. After the e-budgeting system was applied, all programs have had to include the volumes and specifications of the items acquired. As an example, Gagat said using the package system, it was possible to carelessly budget the construction of a school building, without including details of work and purchases. With e-budgeting, the person making the proposal has to enter the number of classroom units and their sizes, with unit prices that have been locked by the Regional Financial Management Board. Construction costs can now be trimmed by nearly half.

Jakarta’s e-budgeting system, said Gagat, was also designed to automatically sort through item components based on sector relevancy. As an example, he said an official at the Jakarta Fire Services would not be able to propose the purchase of syringes, but they would be able to enter purchases for hoses, fire trucks, fire-resistant clothing, and other components relevant to the institution’s duties. “If not locked, the people making the proposals would enter components that are irrelevant to their work, however they want,” said Gagat.

Governor Basuki, who was certain that the draft Jakarta budget for 2015 was laden with irregularities, then submitted the draft budget produced by the electronic system, which did not go through the deliberation process with the DPRD, to the home affairs ministry. As a result, the Jakarta DPRD formed a special inquiry committee against Basuki. One of the things that they questioned was Gagat’s direct appointment as an e-budgeting consultant by the Jakarta administration and that he only received payment as an SPKD instructor.

In March 2015, Gagat was summoned and questioned by the DPRD special inquiry committee. At the time, the team’s chairman, Muhammad Ongen Sangaji, said he doubted that Gagat would give the Jakarta administration the e-budgeting system for free. “As far as I know, it’s impossible that it’s free,” said the Hanura Party politician. But Gagat ensured that the application was given for free. 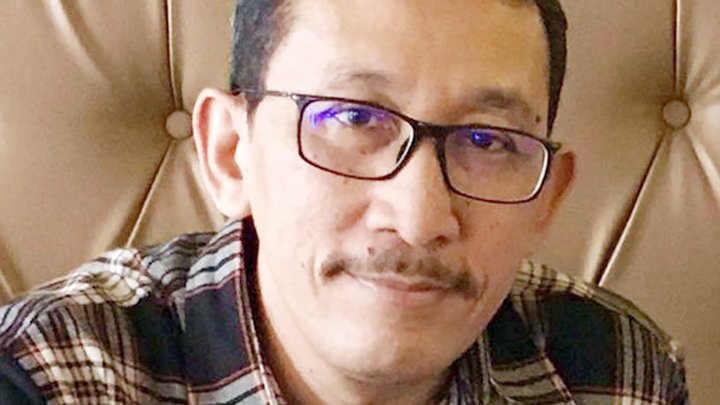 Basuki explained his argument for choosing Gagat, namely, the latter’s experience developing the system in Surabaya. “He only became an expert (consultant), but the e-budgeting syste continues to run and came under the possession of the Regional Financial and Assets Management Agency,” Basuki told DPRD members. Later on, the inquiry committee concluded that Basuki violated regulations when he submitted a version of Jakarta’s draft budget that was not the result of deliberations with the DPRD to the home affairs ministry. Despite the conflict, the e-budgeting system has continued to run until today, after Basuki was replaced by Anies.

After the issue of the Rp82-billion glue purchase came to light, thanks to Indonesian Solidarity Party (PSI) politician William Aditya Sarana, Governor Anies assigned the blame on the e-budgeting system he inherited from the previous administration. “The system is already digital but not smart,” said Anies. According to Anies, a smart digital budgeting system must be able to automatically correct errors. Such a system would immediately verify and display a warning to an operator who carelessly enters data. Odd budget components—such as the purchase of glue for Rp82 billion—would no longer appear. “I will not leave this system to the next governor.”

A Jakarta government official showed Tempo the weakness of the e-budgeting system still used by the Jakarta government, among others having to do with the absence of the budgeting data recapitulation performed by regional institutions. As a result, all data concerning repeated or routine activities has to be re-entered from scratch, which means more work for those who have to enter the data.

As of today, a team appointed by Anies is still reworking the electronic budgeting system. The new system, scheduled for release at the end of 2019, is touted as having the capability to automatically reject irregular data, besides having a comments feature that allows the public to participate in planning the capital city’s budget.

But Gagat dismisses the accusation that he built a weak system. According to Gagat, the discovery of the Rp82-billion glue budget item is evidence that the volume-and-specifications scheme successfully caused the budget item to stand out as irregular. Meanwhile, former governor Basuki says the system created during his tenure was meant to prevent corruption. “A system works well when the people entering the data have no intention to mark-up (budget items), let alone steal,” he said.