An Unprofitable Proposal from Tual


Masela Block’s development is entering a new chapter. Amid preparations for Rp280 trillion project’s front-end engineering design, the contractor received a visit from businessman Tomy Winata, who offered his port in Tual to serve as a logistics base. With regional government officials giving their support, it is believed that accepting the tycoon’s proposal would only cause costs to swell.

ON Tuesday, November 5, Murad Ismail made a change to his schedule. The Maluku governor left the city of Ambon and flew around 617 kilometers southeast toward the city of Tual. Murad chose to accompany Dwi Soetjipto, chariman of the Upstream Oil and Gas Regulatory Special Task Force (SKK Migas), who was to visit Samudera Indo Sejahtera’s fishing port.

The day was turning into night when Murad and Dwi’s plane arrived at the Karel Sadsuitubun Airport in Langgur, Southeast Maluku Regency. After that, they took almost a one-hour journey to the north to reach Samudera. But the Wednesday afternoon visit was brief, lasting less than 30 minutes. “(It’s) already dark, (we) could not see (it),” said Dwi.

The procession of vehicles—spanning half a kilometer long—returned the following day. SKK Migas’s team directly visited Samudera’s facilities one by one, from the marina to areas around the port, including checking the sea’s depth. The port owned by the Artha Graha Group founded by tycoon Tomy Winata, was being prepared as a potential location for the Masela Block project’s logistics base.

It is normal for a construction project to have a logistics base. A contractor needs such a base to accommodate various construction materials as well as the project’s crew. But the prospect of a Samudera Indo Sejahtera port being turned into a logistics base for Masela’s development has caused a commotion among the internal circle of Inpex Masela Ltd, an oil and gas contractor company for the Masela Block.

An Inpex official who has been keeping up with the preparations for the Masela project sees the option as irrational. Samudera Indo Sejahtera is located almost 500 kilometers away from Masela’s Abadi gas field in the south. Saumlaki, the capital city of the Tanimbar Islands Regency, around 150 kilometers from the Masela gas field, is seen as the more rational choice. Besides the closer location, Inpex would have no need to rent property because a liquified natural gas (LNG) refinery for the Masela gas project will be built in Saumlaki. “This new alternative also appeared out of the blue, so (we) don’t know if it would affect the front-end engineering design’s (FEED) scope of work,” said the official. 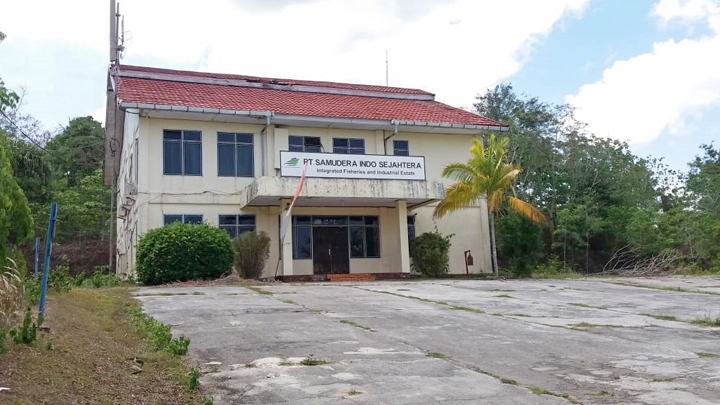 Inpex is indeed preparing to draft the Masela project’s FEED next year. This stage is the government’s follow-up to the development plan with an onshore scheme in July. With a new scheme, the development of the giant gas field is estimated to require an investment of US$18-20 billion, or around Rp280 trillion. The FEED will determine the final investment decision before construction commences in 2022. “Inefficiency will add to the government’s burden because it will be included in the cost recovery,” said that Tempo’s source.

That meeting drew attention due to the presence of Tomy Winata, leader of the Artha Graha Group, who came with his son, Adithya Prakarsa Winata. There was a presentation on the facilities at Samudera Indo Sejahtera’s port during the weekend meeting. “The original agenda was an audience with the governors of Maluku and NTT,” said Tempo’s source.

Maluku Governor Murad Ismail was supposed to join the meeting, but he did not come as he had to attend a plenary session at the Maluku Regional Legislative Council (DPRD) to pass revisions made to the 2019 regional budget.

Since early 2018, officials and public figures in both provinces have continued to debate on the media over the participating interest of 10 percent from the Masela Block. NTT feels it is entitled to a share of 5 percent. The debate continued during Governor Viktor’s tenure.

A woman answered the call when Tempo contacted Tomy Winata at his personal number on Saturday November 16. Introducing herself as Vivi, one of Tomy’s staff, she explained that her boss was visiting the Tambling conservation forest in Lampung, but assured that Tempo’s request for confirmation has been forwarded to him by radio. “It’s better to ask questions about the Masela Block to the government,” Vivi said.

Adithya Prakarsa Winata confirmed that he was present at the Inpex meeting, which was also attended by his father. “We were summoned, (to explain) how (would we) support governors in surrounding (provinces),” he said during the SKK Migas visit to Tual.

The 31-year-old man seemed the busiest in the group as he explained the various facilities at the Samudera Indo Sejahtera port in Tual to his guests from Jakarta and Ambon. He showed the conditions of several fishing boats as well as oil tankers, which were heavily rusted. “(The vessels) have not been in operation for several years,” he said.

Samudera Indo Sejahtera, formerly Maritim Timur Jaya, is located on a 160-hectare land. Viktor Laiskodat was once the company’s commissioner. The port was built by Tomy under an integrated fishing industry area concept and has a fish processing facility, ice factory and a power plant. All of these components still exist, but they appear deserted.

One decade ago, Maritim Timur Jaya placed Tomy’s name as one of the four fishing magnates on the Arafura Sea. The three others were former Catch Fisheries Director-General Husni Manggabarani, with the Mabiru Group headquartered in Ambon; businessman Tex Suryawijaya through Pusaka Benjina Resources in Benjina, Maluku; and Djajanto Group founder as well as Bank Indonesia bailout debtor, Bruhan Urai, in Wanam, Papua. Fisheries businesspeople in eastern Indonesia called them ‘Raja Ampat’, or the four kings.

Like Maritim Timur Jaya, the other three businesses began to flounder. The partnership with fisheries businesses from Thailand and China fell apart after the maritime and fisheries ministry revoked licenses for foreign fishing vessels in 2015. Then-Minister of Maritime Affairs and Fisheries, Susi Pudjiastuti, was convinced that the thousands of foreign-made vessels were behind the massive fish theft in Indonesia’s eastern and western waters, as they were still being controlled by their true overseas owners despite operating under the banners of Indonesian businesses.

Governor Murad Ismail claims he once recommended reviewing the Samudera Indo Sejahtera port in Tual. “Can it be turned into a transit point?” he said. Even so, he says the suggestion was not meant as a proposal for turning the Artha Graha Group’s port into Masela Block’s logistics base. “Even if it is used, I would have no profit whatsoever.”

Meanwhile, Governor Viktor hurried into his official car when Tempo’s journalist attempted to speak to him after the inauguration of the East Nusa Tenggara Science Center at the Kupang Regional Museum on Thursday, November 14. “No comment from me,” said Viktor when asked about the Masela Block.

TUAL is not the only option for Masela Block’s logistics base. One day before visiting the Samudera Indo Sejahtera port, the SKK Migas team also surveyed a number of locations in Saumlaki, Tanimbar Islands Regency. There are two facilities in close proximity there, namely the port used by state-owned oil and gas company Pertamina as a terminal for accommodating oil fuel, as well as the Saumlaki Port.

Tempo’s source at Inpex says the development plan for the Masela Block indeed included a plan for a logistics base. At the time, the megaproject still used an offshore scheme. An onshore facility for construction materials and crew was needed because all of the project’s activities would be focused on a facility that floats above the Abadi field’s well structure. There was once an effort to acquire the land between the Pertamina oil terminal and Saumlaki Port, which faces the Saumlaki Bay.

But due to the switch to onshore LNG scheme, that plan was cancelled. The same source says there was no need to acquire land and to rent a port as a logistics base because the area prepared for developing an onshore refinery can be used. “Why (must we) rent (it), especially when it’s far, in Tual,” said the source.

Inpex Masela Corporate Services Vice President Nico Muhyiddin says his company is still studying in further depth all options for a logistics base in accordance with the needs of the Abadi field’s LNG project. At this time, he explained, Inpex is focusing on preparing the FEED. 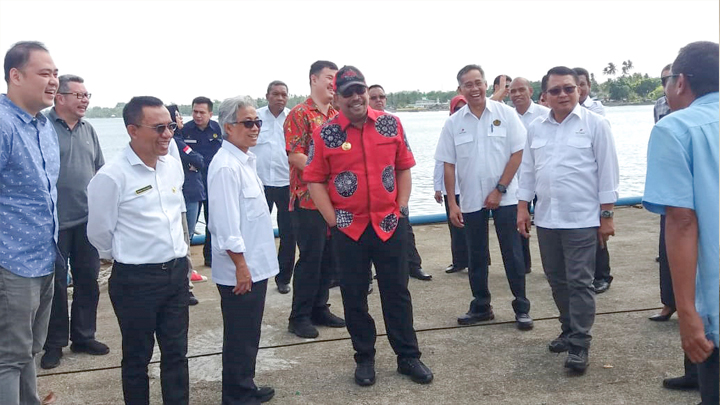 Tanimbar Islands Regent Petrus Fatlolon, who accompanied the SKK Migas team, expressed his hope that the Masela Block’s development will prioritize facilities already available in his region. He reminded the team that his regency is the region that is closest to the Abadi field’s well, making it most cost-efficient.

According to Petrus, the regional government has prepared land around 1,500 hectares in size, which was requested by the SKK Migas for Masela Block’s onshore facilities. At the end of October, he sent a letter to village chiefs and subdistrict heads to stop land sales in the location. The step was taken after President Joko Widodo, during his visit to the survivors of the Ambon earthquake, asked the regional government to ensure that there would be no hurdles to the Masela Block activities. “The President asked to make sure that there would be no problem, both concerning land and social issues,” said Petrus.

Land acquisition was indeed a main problem for the Masela project. Every time Inpex conducts a field visit to survey land, speculators would always follow them to buy land in the same location. In 2011, for example, Inpex surveyed a village on the Selaru Island. Not long after, the land in the village was taken over by a company. The same thing happened when Inpex’s team surveyed several locations in Saumlaki.

Dwi Soetjipto stresses that the SKK Migas has not yet decided on the location for Masela Block’s logistics base, including the offer for a new location in Tual. He explained that the SKK Migas team and the contractor must first study all of the options. “If there are many options, there has to be a tender,” he said, adding that the SKK Migas is open to anyone with the capability to support the project. “As long as it is done transparently.”

Dwi says it is necessary to survey various facilities that can potentially support the Masela project. This way, all supporting infrastructure will be ready when the project enters the construction phase. “If not, the search will be precipitous,” said the former Pertamina CEO.

During the visit to Saumlaki, Dwi and his team also visited Bomaki, Lermatang, and Latdalam villages. They traced forests and areas overgrown with dry wild plants in order to reach the shore. The region is designed to serve as a location for the development of an LNG refinery with a capacity of 9.5 million tons. One of the areas is being prepared as a location to connect the onshore LNG refinery to a Masela Block gas production facility, 145 kilometers to the southwest, in the Arafura Sea.