No Sanction for Army Doctor


President Joko Widodo appointed Terawan Agus Putranto as health minister although a decision was once made to suspend his medical license as an ethical sanction. Terawan is believed to have violated a number of points in the Indonesian Medical Code of Ethics in connection with the practice of intra-arterial heparin flushing, known as ‘brain wash’. A team formed by the health ministry recommended for the practice to be put to an end. But the ‘brain wash’ procedure has continued until today. Terawan’s ethical sanctions, such as the suspensions of his Indonesian Doctors Association membership and medical license, were never implemented. Tempo and Tirto.id collaborated to study irregularities in Terawan’s method and dissertation.

TERAWAN Agus Putranto likens his relationship with Indonesian Doctors Association (IDI) officials to that of a child and its family. When met by his colleagues at the IDI headquarters on October 30, the health minister joked that the most disobedient family members are usually the most loved. Terawan asked IDI board to accept him although he has been the most disobedient child.

Indonesian Medical Council Chairman David S. Perdanakusuma, who was present at the over one-hour meeting, confirmed the dialogue. “Pak Minister tried to break the ice throughout the meeting,” said David when he was contacted on November 28. David says Terawan also asked his colleagues to support health ministry’s programs.

During a special interview with Tempo on November 20, Terawan claimed he had no problem with IDI. But the retired army lieutenant general mentioned the decision made by the Medical Ethics Council’s (MKEK)—one of IDI’s autonomous bodies—on the intra-arterial heparin flushing (IAHF) procedure, known as ‘brain wash’, which he performs at the Gatot Soebroto Army Hospital (RSPAD). Terawan uses the method to treat stroke patients. “The authority approach can’t be (used) for ethical matters,” said Terawan.

Around one and half years before Terawan became minister, his relationship with IDI grew heated. The Ethics Council suspended the radiologist from IDI for 12 months. The council’s letter, dated February 12, 2018, said Terawan violated four principles in the Indonesian Medical Code of Ethics: excessive self-promotion, ignoring the council’s summonses as many as eight times, receiving payment for a medically unproven procedure, and promising recovery to IAHF patients. The council also sanctioned Terawan with a revocation of its recommendation for Terawan’s medical license.

The council’s decision was sent, among others, to the Army Headquarters. MKEK chairman in 2015-2018, Prijo Sidipratomo, says the council sent a copy of the decision letter because then-Army chief of staff, Mulyono, had asked the council to coordinate with him before making a decision. Ignoring the request, Prijo instead directly informed Mulyono of the sanction on Terawan. “He was quite surprised by our decision,” said Prijo, a radiologist.

Mulyono did not answer our request for an interview, which was sent via a letter to his home in Cibubur, East Jakarta. Neither did he receive our phone calls nor returned our text messages. When Terawan’s practice became a controversy in April 2018, Mulyono said IDI should not have given him a sanction. “Doctor Terawan is an institution. (It’s) nice of IDI to sanction (him). I was asked to be present. Who do they think they are?” he said at the State Palace. Mulyono also denied communicating with IDI about Terawan’s fate.

The council’s decision was also sent to IDI management. MKEK Deputy Chairman Pukovisa Prawiroharjo explained that the decision was submitted to the central management to be forwarded to the Jakarta IDI and Central Jakarta IDI as well as the Jakarta health office. According to IDI code of conduct, an ethical sanction is usually executed by the branch management in coordination with the regional management. “But our letter was not followed up,” said Pukovisa.

IDI Jakarta Chairman Slamet Budiarto claims he was never informed about the sanction for Terawan. He also said he was never invited to a discussion by Central Jakarta IDI management, which has the authority to execute sanctions. “We are just waiting for IDI’s letter,” he said.

But instead of ordering the branch management to execute the sanction, IDI chairman in 2015-2018, Ilham Oetama Marsis, held a meeting and invited Terawan at the Borobudur Hotel in Jakarta in the first week of April 2018. Marsis says the meeting was held because Terawan had been given the opportunity to defend himself. Terawan, who was accompanied by four high-ranking army officials, responded to all accusations for almost half an hour. At the time, said Marsis, Terawan did not deny that the IAHF was expensive and had not been clinically proven.

The Borobudur Hotel meeting ended with a press conference. IDI promised to study evidence of the ‘brain wash’ procedure that Terawan was to submit before a decision was made. When bringing the meeting’s results to the central management, Marsis recommended for Terawan’s ethical sanction to be postponed until IDI’s conference in Samarinda, East Kalimantan, on September 23-28, 2018. Marsis says the postponement was meant to buy time while waiting for the health ministry’s stance in regard to the ‘brain wash’ procedure.

One week before the conference, Marsis sent a letter to Terawan, explaining that the ethical sanction decided by the MKEK eight months prior would begin on the date written on the letter, namely October 16, 2018. According to Marsis, he wrote the letter to take responsibility of his performance in front of the conference’s participants. 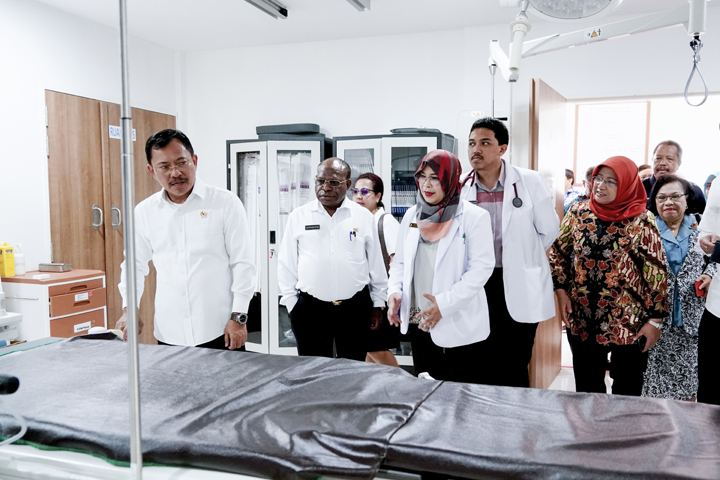 The sanction on Terawan was discussed on a number of occasions at the conference. Pukovisa Prawiroharjo, a neurologist and MKEK secretary in 2015-2018, who was present at the conference, says Marsis mentioned the polemic surrounding Terawan in his opening address. Pukovisa says Marsis apologized because the Terawan affair had become a storm within the organization. During the Ethical Commission hearing, participants also said MKEK’s sanction issued on February 2018 was to apply immediately.

After the IDI conference in Samarinda, the execution of Terawan’s sanction was still vague. Pukovisa says the MKEK, during a joint meeting with IDI officials in last June, questioned the sanction for Terawan, which was never executed. During the time, the central board’s leadership promised to ask regional and branch managements to implement the recommendation published by the MKEK. “Based on the data we gathered, Pak Terawan is still active as the Association’s member,” said Pukovisa.

Despite the storm, Terawan was recommended to serve as an adjunct professor at the Surakarta Sebelas Maret University (UNS). “There is still a long process, but we hope that he will be able to teach at this university once (the decision) is final,” said UNS rector, Jamal Wiwoho, on Thursday, November 28.

The controversy surrounding the intra-arterial heparin flushing procedure that Terawan performs has spread to the House of Representatives (DPR). In April 2018, the DPR’s health commission held a meeting to observe opinions on the ‘brain wash’ therapy. After hearing from a number of people, including IDI and the health ministry, the parliament pushed the government to review the safety of the IAHF method.

Health minister in 2014-2019, Nila Djuwita Moeloek, then formed a task force to resolve the issue. The task force, chaired by Sukman Tulus Putra, a pediatrician, was tasked with studying the IAHF method from its scientific, legal, medical and medical ethics angles.

The task force worked by collecting scientific articles that have to do with the IAHF. Two of the team’s members, whom Tempo met separately, confirmed that the team did not find a single literature that shows that the IAHF therapy is capable of treating stroke. Literature on the method can only be found in two Indonesian journal articles and Terawan’s dissertation at the Hasanuddin University. It was Terawan himself who wrote the two articles.

To confirm its findings, the task force invited Terawan to the health ministry around June 2018. Terawan, who was accompanied by a military official, asked the team’s guidance to understand their method of investigation. He also claimed he had already performed the IAHF therapy on 4,000 patients before taking his doctoral at the Hasanuddin University.

After two months of work, the task force finally made two recommendations: to suspend IAHF and perform a study to obtain evidence of the procedure’s safety and efficacy in treating stroke. The recommendation was then submitted to Nila Moeloek. According to a member of the task force, Nila called their work very comprehensive.

Around three months later, on October 16, 2018, Nila sent a letter to the Army chief of staff. In the letter No. YR.06.03/Menkes/622/2018, she explained that she had considered the task force’s recommendations and decided that the IAHF method could be performed for the purpose of service-based research—a point that was not mentioned in the task force’s final report. Nila also said the Gatot Soebroto Army Hospital was required to submit a proposal for the study and report the study’s results in stages.

But according to two health ministry officials, until Nila was succeeded by Terawan, they never received the proposal and the study results. An official aware of the decision says Nila wanted to maintain the relationship between her institution and the army, which is why she sent a letter that was ‘softer’ than the task force’s recommendations. If ‘brain wash’ was to be allowed, said the official, Terawan would have to perform a step-by-step study.

Nila does not believe that her letter to the army chief of staff ran counter to the task force’s recommendations. According to her, the ministry was attempting to be courteous in responding to the ‘brain wash’ polemic. “I respect my colleague and chose not to make a decision and announce the issue in public,” said Nila at her home in Patra Kuningan, South Jakarta, on November 26.

Terawan says Nila did not ban the IAHF method. “I was asked to perform research by services, meaning the service could continue,” he said. Terawan claimed he has produced a number of scientific articles having to do with the IAHF method.

Although it was banned, the IAHF procedure at the Gatot Soebroto Army Hospital has continued. Fino Saputra—not his real name—claims he recently underwent the ‘brain wash’ procedure at the RSPAD at the end of September. The stroke patient says he saw Terawan observing his staff perform the IAHF procedure in the operating theater. “He guided his staff,” said Fino, who had to pay over Rp60 million for one ‘brain wash’ procedure. Terawan says he still monitors the IAHF practice at the Gatot Soebroto RSPAD once in a while.

Tempo tried to register as an IAHF patient. According to the hospital’s receptionists, a patient has to wait three days before they can enter the operating theater. The therapy involves three stages, namely consultation, magnetic resonance imaging (MRI), and the IAHF procedure of injecting heparin into the blood vessel. The therapy costs between Rp59 million and Rp61 million. The hospital’s chief of Public Relations , Maj. Siregar, confirms that the hospital still performs the ‘brain wash’ procedure.

The MKEK, which is certain that Terawan has violated the code of ethics, sent a letter to President Joko Widodo in late September, asking Jokowi not to appoint Terawan because of his violation. Despite Terawan’s controversial method, President Jokowi still appointed him as health minister. Jokowi believes that Terawan applied good management during his time at the army hospital. “The (health) minister must have sound experience in management. I see that Doctor Terawan has that capability in managing the army hospital.”