Osing youths are preserving the tradition of recitation of Lontar Yusup poetry. They are also involved in the documentation of old manuscripts in Banyuwangi.

Luwih abecik sekehe (It is better than all) / cerita liyana nira (the other stories) / kocaping jero sastera linge (it is recounted in the literary work) / wonten wong kapir ing Mekah (there was an infidel in Mecca) / angucap ya Muhammad (who said ya, Muhammad) / sun anggawa tulis wahu (I bring a written story) / ujar andhe-andhe ika (so it is said).

WITH his eyes focused on the book on his lap, Naufal Anfal, 21, was reciting lyrics that sounded like someone reading Koranic verses. The lyrics are in Javanese, written in Arab Pegon (modified Arabic script), with a transliteration and Indonesian translation below.

“He is reading Lontar Yusup, Pupuh Kasmaran,” said Wiwin Indiarti, an adviser to the Archipelago’s Indigenous Youth Front (BPAN) of Osing concurrently secretary of the Indigenous Peoples’ Alliance of the Archipelago (AMAN) of Osing-Banyuwangi, on Monday noon, November 18.

In the Osing Cultual House in Kemiren village, Banyuwangi, East Java, Naufal Anfal was reciting the stories in Lontar Yusup followed by Jorghi Rona, Nur Kumala Saidah, Ilham Syaifullah and Pratiwi. They are affiliated with the Millennial Lontar Yusup Recitation Association. Their recitations were solemn, with no music.  “We train every two weeks,” said Naufal, the group chairman.

Members of the association commonly called Mly Milenial  train on Friday evenings in their members’ houses. Mly Milenial  comprises young people who enthusiastically preserve one of the traditions of the Osing community, which is lontar  or old  manuscript reading, especially Lontar Yusup.

According to Wiwin, Lontar Yusup contains the story of Prophet Yusuf. “Prophet Yusuf was endowed with patience in the face of various God’s trials in his lifetime,” said Wiwin, explaining the moral of Lontar Yusup. “Owing to his sincerity in accepting everything already destined by God he became a man with great soul.”

Mly Milenial  was born in October 2018 following a lontar recitation training, as initiated by Wiwin Indiarti with the support of the BPAN of Osing-Banyuwangi. At the time, Wiwin as secretary of the Quality Assurance Board at PGRI University, Banyuwangi, had just finished her book Lontar Yusup Banyuwangi: Arabic Script-Transliteration-Translation which became the material for mocoan  training. Reciting lontar is one of the skills taught to the millennials grouped in the customary school of the BPAN-Osing. “The handing down of the tradition to the Osing younger generation is very important to realize,” said Wiwin.

The youths turned out to show their great zeal by joining the training. Around 30 people followed the training including Naufal, Nur Kumala, Ilham and Tiwi.  “My grandmother is an Osing woman, so why should I refrain from delving into our ancestral culture?” said Naufal, who comes from Sukonatar village, Banyuwangi.

Participants of mocoan have also come from outside Kemiren Osing village, even some non-Osing youths joint. Nur Kumala for instance. “I am not an Osing community member, I was recruited by Miss Wiwin,” said the English education student of PGRI University, Banyuwangi.

Originally Nur Kumala was skeptical about lontar reading. “At first I had no idea what it was. It turned out to be like singing, purely reciting without music. So I got interested,” said the 26-year-old woman who happens to be fond of singing.

But after some time, members of Mly Milenial dropped out one after another. Some were no longer interested and others moved due to their job transfers or other matters. Now 13 people are still left attending mocoan lontar  on Fridays every two weeks.

They are frequently invited to perform mocoan  in dusk-to-dawn rituals or ceremonial programs. “Elders who are told about female mocoan members usually wait for us to recite,” said Wiwin laughingly. It can be understood as only males used to be active in this old manuscript reading.

The lontar  recited on Monday noon is the work of Wiwin Indiarti processed from Lontar Yusup from Carik Jannah, the former carik (village secretary) of Cungking, a village older than Kemiren. “It was the oldest lontar  I could obtain,” said Wiwin.

Wiwin and the BPAN-Osing Banyuwangi have indeed for some time strived to make an inventory and documentation of old manuscripts of Banyuwangi. These manuscripts are called lontar, although they are no longer written on lontar (palm leaves) but instead on paper.“Starting March 2019, we kept collecting manuscripts and digitizing them under the sponsorship of Dreamsea,” said Ilham Saifulloh, now alternate chairman of the BPAN-Osing.

The old manuscripts of Banyuwangi are in the hands of different people. Many of them have also been lost. According to Ilham and Wiwin, most of the manuscripts are owned by farmers who have inherited them from their parents. But some of the farmers cannot read the manuscripts. “They are considered heirlooms,” said Wiwin.

Ilham told about his neighbor who owns a lontar but is unable to read it. “When a thanksgiving ritual is held in his paddy field, he invites a neighbor to recite the lontar,” said the 19-year-old youth.

The manuscripts in Banyuwangi are more than just Lontar Yusup. There are many others, including Lontar Murub Muncar, Lontar Juarsah, Serat Damar wulan and Lontar Ahmad and some manuscripts which grew in the Islamic boarding school (pesantren), dealing with fiqh (Islamic jurisprudence) and tauhid (oneness of God), like Serat Anbiya, about the 25 prophets in Islam. “But only five prophets are left. Many have been borrowed for copying, but they are no longer intact when returned to their owner,” noted Wiwin.

According to Wiwin, she and her team got difficulty in borrowing manuscript to be digitized. “The owner is still under the trauma of the treatment of previous manuscript borrowers.” 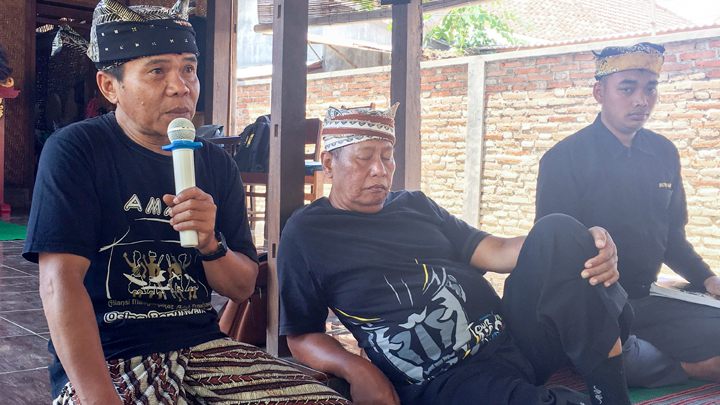 Most of the lontar documents use Pegon Arabic script but the language is Javanese. “But it is not present-day Javanese,” said Wiwin. She gave an example of the reference to God with the term Hyang Manon (the sun). “Perhaps it was because Hinduism was here, so that to make Islamic propagation friendlier the words were used.”

Beyond what is undertaken by Wiwin and the BPAN, several Osing figures have also initiated the conservation of the mocoan lontar  tradition. Among others, Adi Purwadi has conducted lontar reading for older people.

Kang Pur, as Adi is called, first arranged recitation training in 2010. Senior residents, all males, participated. After some time, he organized the same training with 27 younger men joining. “But they were all heads of families,” said Kang Pur,

who is also active in the Board of AMAN Banyuwangi.

From those gatherings, now there are two groups of mocoan  that continue to hold recitation sessions routinely, Kamisan (every Thursday) and Reboan (every Wednesday).

In order to include a lot more members of the millennial generation,Wiwin and the BPAN-Osing are preparing a training model and module that are more millennial-friendly. A video is also uploaded to Youtube to enable people to learn independently.

AMAN Osing Banyuwangi, according to Kang Pur, is now put a requirement for those, young as well as old people, who wish to become members of AMAN to learn mocoan lontar  and Osing language. “Otherwise, the tradition could be lost,” said Kang Pur.