After the House’s Rush Job


Tens of NGOs initially focused on their own distinct issues ended up joining hands. They resisted the House’s plan to pass various bills and law revisions.

A STATUS update on the social media account of a politician caused tumult among members of the Institute for Criminal Justice Reform (ICJR) on September 16. The politician wrote that the House working committee for the Criminal Code bill (RKUHP) had just completed its last deliberation of  the RKUHP at the Fairmont Hotel in Jakarta, night of September 15.

ICJR members who had been monitoring the deliberation process for the RKUHP since 2007 felt cheated. They had not heard information that the working committee was rushing their deliberations on the RKUHP. According to ICJR researcher, Maidina Rahmawati, the deliberations agenda, which was open to public access, was last updated on the House website in May 2018. Since then, nothing had been scheduled. They had to look for information themselves by asking House members and House expert staff.

The NGO obtained news that the working committee had closed meetings as well as meetings with the government. They managed to obtain the draft being deliberated upon by the two institutions from their sources. But, said Maidina, the draft they obtained still had numerous problems. “Suddenly there was a post saying they had completed the final deliberation in a closed meeting. We were upset then,” she said on Thursday, December 19. ICJR was worried that the House was rushing to pass the RKUHP before the end of its working term two weeks later.

They spread news of the closed meetings on the WhatsApp group “National Alliance for KUHP Reform.” Thirty-three NGOs are joined under the alliance. The information was also received by the People’s Alliance for Justice and Reform (AMUKK), a larger organization. Some of its members also belong to the National Alliance and Anti-Corruption Civil Society Coalition. AMUKK was formed in early September to respond to setbacks in democracy. One of the indications is that the government and the House were not listening to the people’s voices. When they heard that the working committee had finished deliberating, AMUKK was shocked.

Two members of the Indonesian Planned Parenthood Association (PKBI), who belong in the two groups, immediately went to Fairmont. Riska says the hotel’s staff confirmed that the Ministry of Law and Human Rights—who initiated the KUHP revision—had booked a room for September 14-16. “But when we came, the room they were using was already abandoned,” said Riska on Friday, December 20. 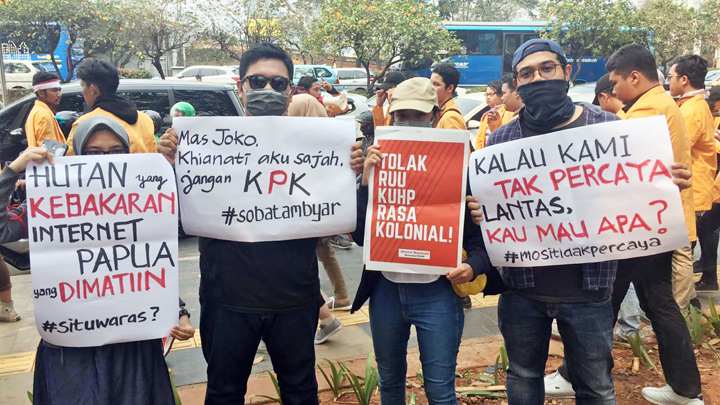 Out of worry that the bill would be passed without their knowing its final contents, members of the National Alliance for Reform then looked for the draft bill, asking members of the working committee and their expert staff. ICJR and several other institutions also hunted for the draft, asking those in the expert team who formulated the revision, made up of criminal law professors, among others, Muladi, Harkristuti Harkrisnowo, Eddy O.S. Hiariej, and Marcus Priyo Gunarto. They finally managed to obtain the draft.

Members of the alliance agreed there were many turns for the worse in the most recent draft. According to Maidina, there were at least 17 problematic issues, including those concerning insult to the legitimate government, freedom of expression, freedom of press, privacy, as well as laws that apply to the public. AMUKK, who had already planned to protest in front of the House building against the revised Corruption Eradication (KPK) law revision that day, also protested against the KUHP draft bill. They did not want the House to pass the two problematic revisions.

One day after the storm among the alliance’s members, the House suddenly passed the KPK law revision. The Anti-Corruption Civil Society Coalition had been protesting the House’s plan to revise the law  from the outset. They believed the revision was deliberately performed to weaken the KPK. The House was also believed to be enfeebling the KPK by passing Insp. Gen. Firli Bahuri as a KPK chief candidate despite Firli being suspected of violating the ethical code while he was KPK enforcement deputy in 2019. “We and the Civil Society Coalition are planning to take steps for advocacy,” said Indonesia Corruption Watch researcher, Wana Alamsyah, on Wednesday, December 18.

Still reeling from the shock, one day after, the House law commission passed the RKUHP at level 1—approval by the law commission before the plenary hearing, a step away from the House passing the draft revision into a law. “We were devastated,” said Riska. 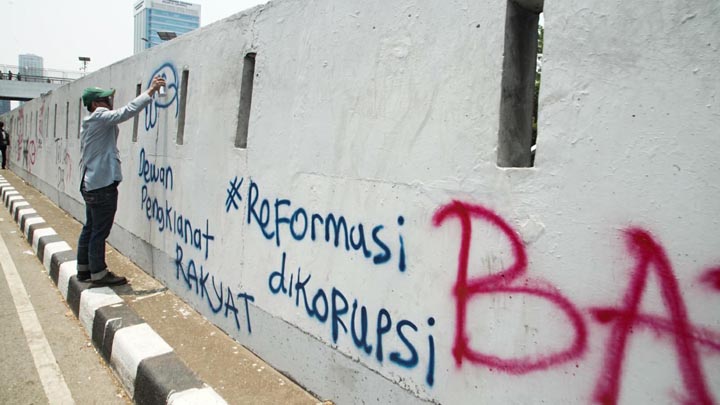 Observing that the House was reluctant to listen to their input, members of NGOs joined under AMUKK drew closer together. Besides the National Alliance for Reform and the Civil Society Coalition, AMUKK has other larger alliances as members. They repeatedly held meetings at the Indonesia Legal Aid Institute Foundation (YLBHI) in Central Jakarta and the Alliance of Independence Journalists office in South Jakarta.

In one of the meetings, these organizations presented their research. ICJR and PKBI, for example, explained the setbacks as a result of the House working committee meeting at the Fairmont Hotel. Meanwhile, the Civil Society Alliance explained the potential future of the fight against corruption should the KPK law be applied and Firli lead the KPK. “We see KPK as the last stand against an oligarchy,” said YLBHI chairperson, Asfinawati, on Thursday, December 5.

Meanwhile, the Commission for Missing Persons of Victims of Violence (Kontras) presented the conflict in Papua, the criminalization of activists and severe human rights violations. Other NGOs also presented issues not yet resolved by the government, for example, the forest fires in Kalimantan and Sumatra that had not yet been taken to court. “Seven demands were agreed upon,” said Falis Aga Triatama, member of Kontras’s advocacy division, on Friday, December 20.

They then splintered into smaller teams, including a campaign division. Among others, the team created the hashtag #ReformasiDikorupsi (reform corrupted) for their social media campaign and held a press conference. All organizations with networks in the regions as well as university students were asked to spread news of the movement.

Some others planned the protests, which began on September 23. “At the time we did not expect that many people would take part,” said Asfinawati. More than one million people from various elements of society in Jakarta and numerous other cities took to the streets in the protests that continued on until early October. The mass protest caused the House to postpone passing the RKUHP, the mineral and coal bill, correctional procedures bill, as well as the land bill at the end of their working period.

The NGO activists’ movement did not erupt out of the blue. The National Alliance for KUHP Reform, for example, had been monitoring RKUHP developments since 2005, and responded to the RKUHP draft planning by the law and human rights department since 1999. They filtered input from the public in various regions, created an inventory of problems and  in 2006-2007 delivered an awareness campaign to the public on the plan to revise the Criminal Code.

They uploaded each deliberation result that they obtained on their site, reformasikuhp.org, so that the public, including unthwe ersity students could also monitor developments as neither the government and the House publicized the results of their discussions. Furthermore, they held several discussions on the KUHP and RKUHP with university students. 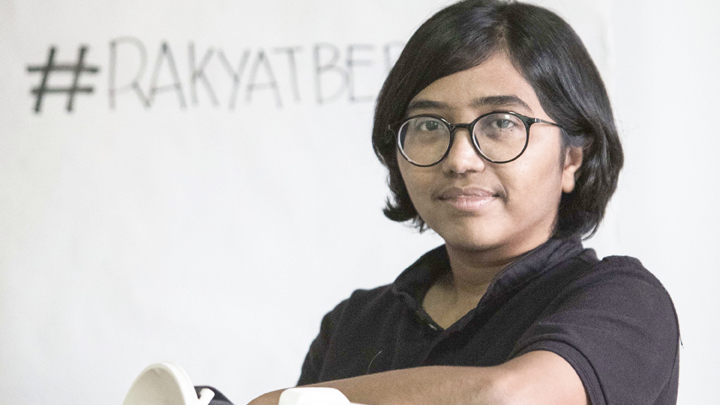 Because of its active monitoring of the deliberation process, the National Alliance discovered that many articles were still problematic and could potentially hurt Indonesians. When the House planned to pass the revision on August 17, 2018, as an independence day gift, they expressed rejection and held a protest, asking the House not to hurry passing the draft bill before all problems were resolved and agreed upon with the public. The KPK also asked not to include corruption in the draft Criminal Code revision. In the end, President Joko Widodo asked the House to postpone passing the bill.

The Anti-Corruption Civil Society Coalition also rejected the effort to weaken the KPK ever since the third episode of the “Gecko versus Alligator”  (KPK vs Police) affair in 2015. At the time, the KPK had named the single candidate for National Police chief, Comr. Gen. Budi Gunawan, a suspect for allegedly owning a suspicious bank account. The National Police then named KPK deputy chief, Bambang Widjojanto, a suspect. Bambang was accused of instructing witnesses to provide false information during a court trial on the West Kotawaringin regional head election dispute in 2010.

But before the Civil Society Coalition was formed, its members, such as the Indonesia Corruption Watch, YLBHI, the Indonesian Court Monitoring Community, Press Legal Aid Institute, and the Association for Elections and Democracy, Transparency International Indonesia, I am an Anti-Corruption Woman, as well as Jakarta Legal Aid, were already monitoring corruption related issues, particularly the KPK, since far before. Besides having these organizations as members, AMUKK also has members who are not joined under any NGO, such as activists Dhyta Caturani and Adhito Nugroho. 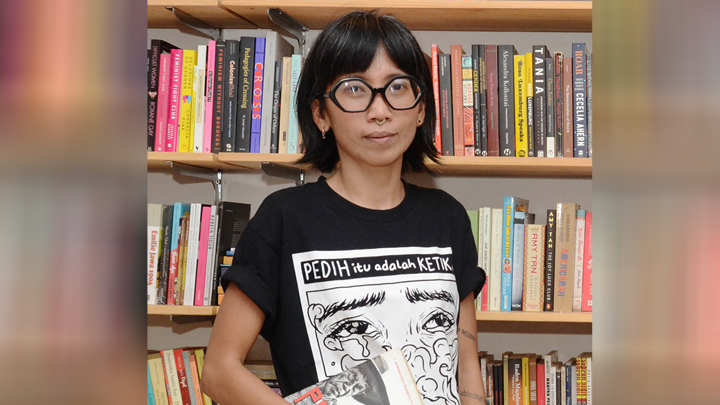 They also frequently discuss various issues in research forums, including with students. Jakarta Legal Aid, for example collaborated with University of Indonesia’s Executive Student Body (BEM) in advocating for the forced eviction of tens of residents of Kebun Sayur, Ciracas, East Jakarta. “We have been working with LBH Jakarta since long ago,” said UI BEM head of research and strategic action, Elang M. Lazuardi.

To this day, AMUKK and university student activists still monitor developments concerning the government and the House’s response to their seven demands. “Our demand is for the revision to be fixed, not a postponement,” said Falis Aga Triatama.