TWO decades after reformasi (the reform), student protesters have returned. With the civil society’s support, university students again reasserted their historical role as the nation’s conscience. Activists, academicians, artists and concerned citizens worked together to ensure that their act of protest would disrupt those in power. Amid the polarized political atmosphere as of late, with the nation divided into two opposing camps, and the increasingly banal oligarchy, the series of protests by university and secondary school students in over ten cities across the country at the end of September give us hope. They are still here.

Difa Shafira, a law student at the University of Indonesia, was among those present. She was born 21 years ago, when similar protests by university students forced President Suharto to step down after over three decades in power. Her friends who took to the streets on that day were around her age. Elang Lazuardi, Difa’s peer at the university, stood in awe as he watched waves of university and high school students, as well as activists, crowd Senayan.

On that day, Elang and Difa joined tens of thousands of protesters in Jakarta, Bandung, Yogyakarta, Surabaya, Medan, Makassar, and other cities, who showed their fight with the hashtag #ReformasiDikorupsi (reform has been corrupted).

They protested the Corruption Eradication (KPK) Law revision, which was approved by President Joko Widodo and the House of Representatives in a hurry. They also rejected the plan to pass the Criminal Code bill, revised land bill, and labor bill. Protesters also demanded for the bill against sexual violence to be passed immediately. Aside from making demands regarding legislation, demonstrators pushed for the government to put an end to forest fires and other environmental destructions, and to stop criminalizing pro-democracy actions.

All of the issues put forward by the protesters were crucial matters that would determine the future face of the country. The masses’ seven demands represented the people’s restlessness caused by issues such as protection of the right to privacy, democracy, gender equality, climate change, the fight against corruption, and economic justice.

Close to the afternoon, near the Gelora Bung Karno Stadium one kilometer away from the primary gathering point for protesters in front of the parliament gates, the police began to launch tear gas to disperse protestors. Difa ran away from the smoke. Her eyes began to hurt. For the first time in her life, she experienced the pain of tear gas.

TEMPO chose the massive protests across Indonesia at the end of September 2019 as People of the Year 2019 for a number of reasons. Amid the failure of formal political institutions, including political parties and the parliament, to channel people’s aspirations, the civil society act offered a promising alternative.

Civil society emerged when the public felt helpless while it witnessed the political elite taken hostage as oligarchs and cartels took control of policy making by legislative and executive institutions. The coalition between NGOs and students became a new funnel for the interests of the general public. 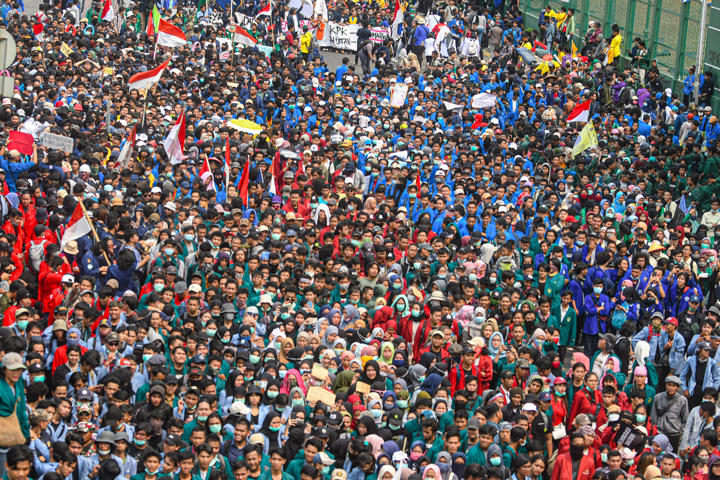 Students from many universities from throughout Indonesia at the parliament complex gates, Senayan, Jakarta, September 24, 2019. ANTARA/Muhammad Adimaja

Furthermore, this year’s student and civil society protests can be considered extraordinary as they managed to surmount political polarization among the public. We all know that during the presidential election, the rivalry between Joko Widodo and Prabowo Subianto caused a fracture within the community. In the end, mainstream political powers were only divided between the “cebong” (tadpoles) and “kampret” (bats)—the pejorative designations for the presidential candidates’ two supporting camps. The civil society action to refuse a number of bills prepared by political factions in support of both presidential candidates in the parliament caused the divide between the two camps to lose its relevance.

Another reason to choose the mass protests as this year’s notable figure is the fact that the students truly worked independently. No businesspeople nor politicians financed or sponsored these students. The students even refused financial help from civil society alliances, let alone political parties and their affiliated mass organizations. This was among the factors that cost the student movement a lasting stamina.

It’s true that the emergence of the movement was a surprise. Students who dominated the mass action were millennials and generation Z, a grouping considered to be apolitical and unconcerned with big issues that do not intersect with their daily lives.

But the assumption was proven wrong. Although most of the students were born after the 1998 reform era, these young people fought hard and loud to protect their rights. This is why their presence in the front lines of fighting gives us hope.

Furthermore, the student action managed to effectively transform the situation. After the people bombarded Senayan for days with their protests, the government and parliament relented. Several controversial bills, previously prepared to be passed at the House plenary session were postponed. Unfortunately, not all of the demands were met. Some are time bombs, still ticking away.

Tempo’s People of the Year 2019 is indeed unique as we would usually select one or several individuals. This time, we have chosen the mass protests by students and concerned citizens.

No one individual stood out during the mass protests in the country, either from the student, worker or activist circles. All moved as a collective power who complemented each other. They were also more comfortable calling their action a “leaderless movement.”

A similar strategy was applied by demonstrators in Hong Kong. Since they rejected the extradition bill in early July, thousands of Hong Kong’s young people have taken to the streets. Students, workers and activists organized their resistance from the underground through encrypted communication channels. There has been no single command.

This is why choosing a source was the first challenge in writing this report. In the early stage of research, we tried to discover who were actively involved in advocating against corruption and the Criminal Code bill, because the mass protests departed from these two issues. Based on our exploration, we began to find intersections and interactions between various NGOs and other elements of  civil society.

Once we had an early map of the actors and their roles, we repeatedly cross-checked with our sources. Tempo’s journalists in the field continued to match stories, chronologies and the facts given by each source. There were times information given by more than one source did not match because not everyone remembered or had recorded the details of an incident well.

Some sources were reluctant to share full information due to security reasons. They argued that the movement was not yet finished, meaning they had an interest to continue guarding its secrecy. We of course understood this argument.

In order to obtain the story on how the student movement was awakened from a long hibernation, we met leaders of students from several universities. They told us many interesting stories, for example, about the secret meetings attend by tens of students from dozens of universities, held at the Trisakti University in Jakarta several days before the protest in front of the parliament building. Out of fear that what was discussed during the meetings would be leaked, attendees’ cell phones had to be left outside the room.

We also attempted to obtain testimonies on the deaths of five young people in the protests. Three of the victims, Bagus Putra Mahendra, 15 years old; Maulana Suryadi, 23; and Akbar Alamsyah, 19, were killed in a protest in Jakarta. Meanwhile, Randi, 22, and Muhammad Yusuf Kardawi, 19, two students at the Halu Oleo University in Kendari were shot by the police and killed in a protest in front of the Southeast Sulawesi Regional Legislative Council (DPRD).

Based on the information given by their friends and family members, we studied the profiles of these heroes. Both Randi and Yusuf, for example, although quiet people, turned out to be actively involved in organizations inside and outside their university. Both were also known to be loyal to their friends. Randi and Yusuf’s university friends promise that their friends’ sacrifice will not go in vain. On December 19, the Corruption Eradication Commission (KPK) named an auditorium and a meeting room at the KPK building after the two students.

WRITING this special report was like arranging the scattered pieces of a puzzle. It’s possible that we have not yet managed to connect all the pieces into a complete picture. We could have missed several pieces containing more powerful and interesting stories. But the effort is important to stress the fact that the student movement and the civil society alliance have not yet finished their work.

In 1926, Tan Malaka wrote a slim book titled Massa Actie (Mass Action), urging people to think freely and have the courage to speak out.

“A nation must be free in thought and endeavors. So it must stand or transform using its mind and efforts according to its capability, emotion and will. Each person or nation must use their strength to advance the civilization of the common person. Otherwise, they do not deserve to be called a human being or a nation and in essence do not differ one bit from being an animal.”

Difa, Elang, and tens of thousands other students, workers, artists, activists and academicians who protested at the end of September have answered to Tan Malaka’s appeal.