A Good Start amidst the Middle East Escalating Tension


UNEXPECTEDLY the rupiah appreciated when the situation in the Middle East is escalating.

On Friday, January 10, the rupiah exchange rate soared to Rp13,773 per US dollar, the strongest position since April 2018. Various positive factors in the start of 2020 seems to have banished the negative energy that spread when the US-Iran conflict peaked after the assassination of General Qassim Soleimani on January 3.

The rupiah’s appreciation is not unrelated to the de-escalation of conflict. Iran retaliated by firing missiles to US military bases in Iraq, but there were no casualties from the US troops. Within the next few hours, a Boeing 737-800 NG belongs to Ukraine International Airlines crashed near the Tehran airport. Speculation spread that the plane, which carried 176 passengers and crews, fell by a strayed Iranian missile. It is still unclear what exactly happened. However, the conflict that seemed to be on the verge of an open war has suddenly dissipated. Global financial markets is relieved.

Brent oil prices, which had risen close to US$70 per barrel, fell back to US$65 on Friday, January 10. The steady fall in oil prices was a great relief for Indonesia, that imports equivalent of one million barrels of oil products per day. Cheaper oil certainly reduces the burden on the current account deficit.

The lower volatility of oil prices is not the only reason behind rupiah’s appreciation. At the start of the year, the Indonesian government aggressively issued bonds. On January 7, the ministry of finance successfully auctioned seven series of rupiah-denominated government bond worth of Rp20 trillion. After that, it issued two more series of US dollar-denominated bonds totaling 2 billion and a euro-denominated series valued at 1 billion.

In uncertain situations, the market will look for safer vehicles for investment. And government debt is always considered safer compared to other instruments. As a result, the government is making a killing. The government sold US dollar bonds with 10 year maturities with a yield of only 2.880 percent, the lowest all-time record for the instrument. The same goes for seven-year euro bonds which sold at a yield of 0.953 percent. 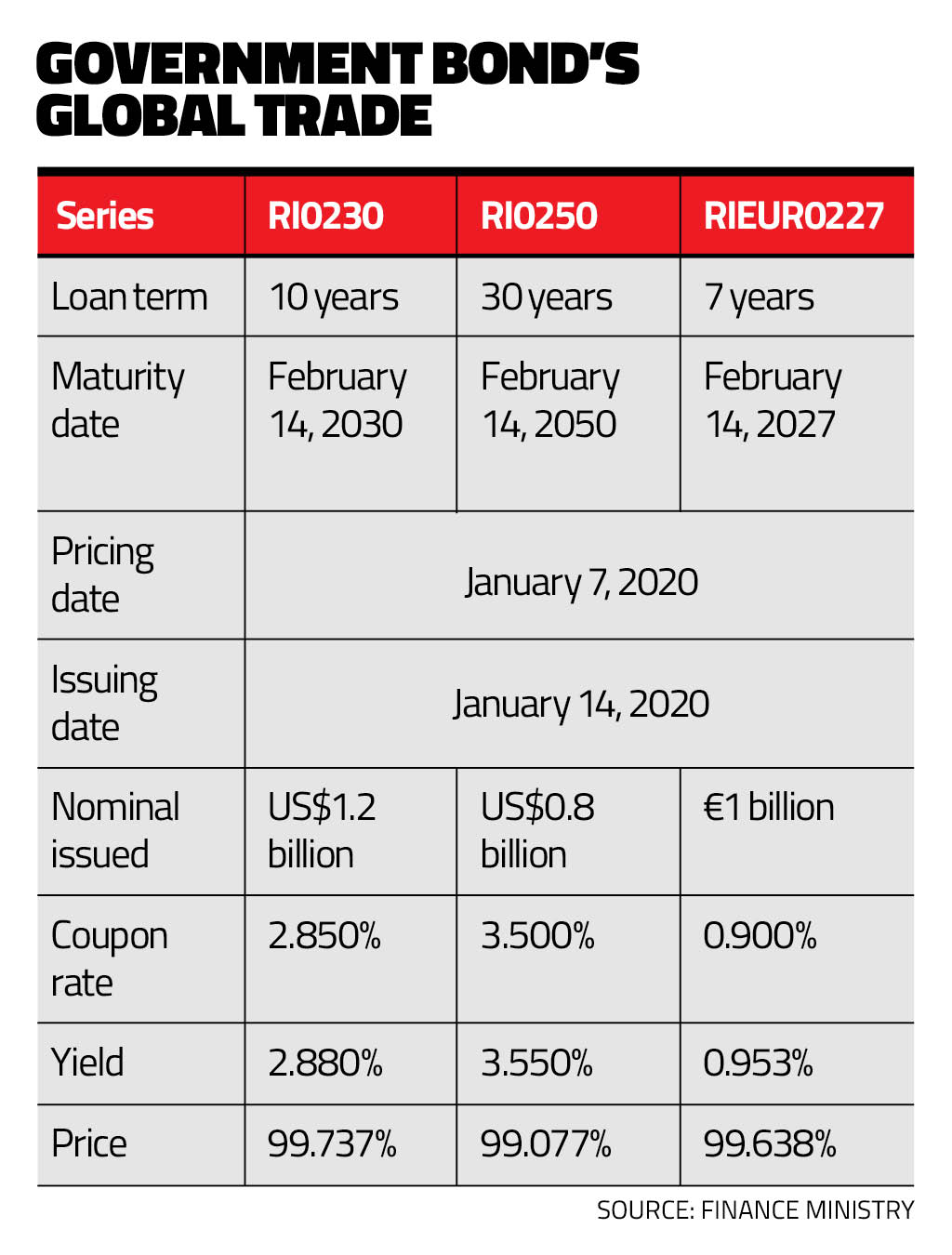 Indeed, the government must aggressively borrow from the market to cover the 2020 budget deficit. This front loading strategy, issuing various series of bonds early in the year, is like stocking up ammunition. The rupiah also rises because the foreign currency flows in en masse from the sales of those bonds.

This is a good start of 2020. However, the global investors also have high expectations to Indonesia. The economic restructuring which was promised by the Indonesian government must be realized. That is what will drive optimism and convince investors to buy government bond.

What they are highly anticipating is the passing of the so called omnibus law by parliament. It is a new law that will deregulate multiple sectors at once. So far, investors in the real sectors have always bemoaned the inconsistencies in many regulations that hinder various business activities. The economy becomes highly inefficient when the various regulations end up contradicting each other and creating opportunities to make collusions between bureaucracies and politicians. Only businessmen with strong connections to them can make moves. All sorts of economic activity ultimately require higher costs because of rent-seeking economic practices.

If this hope turns out to be false—when finally the long-awaited omnibus law fails to create an economic climate that is transparent and free of political distortion—do not be surprised if investors confidence reverses, even collapses. This good start in 2020 is also a signal to the government for not doing anything stupid when managing the country’s economy. The government must hold on to the principles of a free and open market economy.