Discussion over revision of the broadcast law is restarted from the beginning. The old scheme of migrating television from analog to digital is still hanging in the balance.

PURNAMA Ningsih now rarely watches digital television, as it has annoyed her at no end. Every time she pushes the remote for a choice, the signal goes awry. “Meanwhile, when there actually is a signal, the images are good,” Ningsih, 33, said on February 7.

Ningsih bought a sophisticated television set in December 2018, coinciding with the national online sale day. She bought a smart TV, which could directly connect to the Internet, and can easily capture both free-to-air analog and digital television. Ningsih recalls a number of digital television channels she was able to enjoy all through last year, including NET TV, RTV, BeritaSatu, and TempoTV—the latter affiliated with this magazine. Several local television stations were also among them, “but I forgot their names,” she said.

However, simulcasting alone was not deemed enough for the Indonesian Association of Digital Television Broadcasters (ATSDI). In order to create a digital broadcasting ecosystem, the ATSDI said analog broadcasting should be aborted, as they swallow up 328 megahertz (MHz) on the main frequency of 700 MHz. “If the ecosystem is not yet set, there will be no audience,” said Tulus Tampubolon, secretary-general of ATSDI, on February 4. “We must meet our competitors and viewers.”

Tulus is hopeful that a digital television ecosystem will be established. On January 29, the House of Representatives’ (DPR) Broadcast Commission called four television associations to a hearing on the revision of Law No. 32/2002, regarding broadcasting. A day prior to meeting with these associations, the Commission called in the Kominfo, represented by its Postal and Informatics Director-General Ahmad M. Ramli.

These two meetings sign the rehashing of the Broadcast Law revision, which has been on the DPR’s agenda since 2007. The Broadcast Commission had actually already completed its draft revision in 2017. However, it has been on hold in the legislation body. “We are lagging behind other countries in migrating to digital, even among ASEAN countries,” Tulus said, referring to the Association of Southeast Asian Nations.

IN a legislative meeting on broadcasting on January 28, Ahmad M. Ramli warned of the urgency of migrating television from analog to digital. Indonesia is lagging behind Singapore and Malaysia, which had already done this in 2019. Even Myanmar is set to migrate this year.

In a number of global telecommunications meetings, those countries has repeatedly asked when Indonesia would realize its analog-to-digital migration plans. “They were making verbal protests,” Ramli said. This neighboring countries have an interest in this as Indonesia’s analog system often interferes with their digital broadcast.

The Regional Radio Communications Conference organized by the International Telecommunication Union (ITU) in 2006 in Geneva, Switzerland, actually already agreed on the migration of analog to digital at the latest by June 17, 2015. Indonesia was among the countries which ratified that agreement. Later on, however, countries in Asia asked for a delay until 2020. The plan was that the frequency can be used for disaster related services and high-speed internet, such as 5G. This is the best frequency as it has a wide reach, including getting through mountain ranges and bad weather. 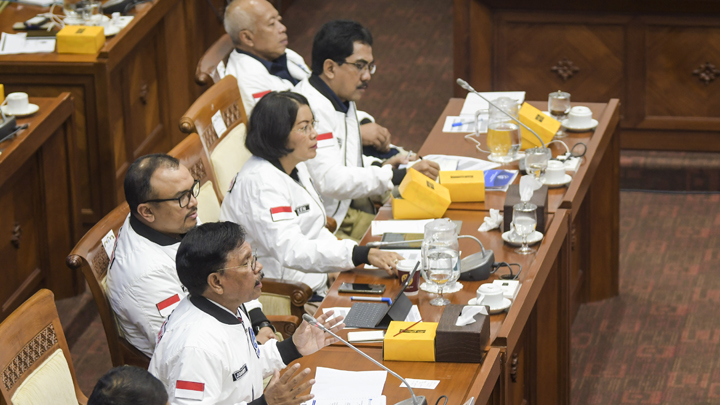 Communication and Informatics Minister Johnny G. Plate at the working meeting with the DPR’s Broadcasting Commission, which among others discussed the development and configuration of permits for digital television broadcasters, at the Parliament in Senayan, Jakarta, February 5./ ANTARA/Galih Pradiptaa

The problem is that the frequency is currently under the control of 14 national television stations. In order to operate in analog, they have tagged a spectrum of 328 megahertz (MHz) in the frequency of 478-806 MHz. These stations controlling the public frequency also enjoy the lion share of television ads, which totaled Rp110.46 trillion in 2018.

The government has calculated that after migration to the digital system, the frequency spectrum needed will only be 176 MHz, both for analog and digital. For digital broadcasting, one frequency spectrum could accommodate up to 13 channels with standard quality (SD), or six channels with high resolutions (HD). Only one multiplexing is needed to capture content from television stations and broadcast them simultaneously to viewers, who in turn only need a smart TV or a regular one with a set top box.

The government has also prepared digital broadcasting on the frequencies 518-694 MHz, and reserved 40 MHz on the frequencies 478-518 to develop digital programming. Based on this restructuring, there is a remaining spectrum of 112 MHz as an efficiency result of the analog-to-digital migration, also known as digital dividend.

In the future, this digital dividend can be utilized for early disaster warnings, education, tele-medicine, and 5G Internet access. “These are very limited government assets,” Ramli said. Analog to digital migration, or analog switch off (ASO) is a prerequisite for the state to take over those assets from the 14 national television broadcasters.

Global management consulting firm Boston Consulting Group has made a calculation of Indonesia’s digital dividend. If the ASO starts in 2020, the contribution of digital dividends until 2026 could add up to Rp443.8 trillion to gross domestic product. State tax and non-tax income could potentially rise by Rp77 trillion, and some 181,000 new enterprises could be added, resulting in 232,000 new jobs.

In the period of 2011-2012, the communication and informatics ministry had initiated the migration process by issuing a number of regulations. However, the regulations were then sued all the way to the Supreme Court. In 2013, the Supreme Court overturned the regulations and asserted that migration from analog to digital had to be regulated by law. Broadcast law prior to 2002, meanwhile, had no stipulations for this migration. “Meanwhile, the ASO in other countries only needed executive orders,” Ramli pointed out.

NURDIN Tampubolon, DPR member from the Hanura Party and member of the Broadcasting Commission for the 2014-2019 period, recalls how the Commission concluded the draft revision of the broadcast law in 2017. A number of crucial articles, which are to be the basis of the ASO, had been agreed upon.

Deadline for the migration, for example, was set at three years after the new law is issued. Thus, at the time the plan was that the whole process would be concluded by 2020.

The migration model agreed upon was the single multiplex, or single mux. This means that the infrastructure used to broadcast digital frequencies by TV channels in the future would be controlled by a public broadcast institution. This model is seen to give the government control of the frequencies.

The concept of multiplexing by a number of entities—multimux—in this case executed by private broadcasters, is seen as the status quo: that the frequencies are controlled by the old guard in broadcasting. “But as soon as the bill went to the legislation body, it immediately hit a brick wall,” said Nurdin, who is also the owner of digital television broadcaster Nusantara TV, on February 7. Nurdin, who is no longer a DPR member, is currently an expert staffer for the Vice President.

Golkar politician Meutia Hafidz, current chair for the Broadcast Commission and member of the Commission for the 2014-2019 period, said that the legislation body in 2017 had the right to change the content of the draft law approved of by the Commission. “This is what has caused the delay,” she said in Jakarta on February 6.

At that time, some members of the legislation body were indeed against the multimux system being controlled by a single institution. Among them was Golkar politician Firman Soebagyo, who was deputy chairman of the legislation body. Firman said that this could lead to a monopoly. “The law should not result in a new form of monopoly,” he said, explaining his reasoning.

Nurdin, meanwhile, said that the legislative body then put this up for voting, resulting in the victory of the multimux being controlled by a single entity, as proposed by the Broadcasting Commission. “However, the legislation body did not hand this over as a bill to the (DPR’s) plenary session,” he said.

As a result, the current discussion on the draft law revision is not a continuation of the process in the prior period at the Broadcast Commission. Instead, the discussions have started again all the way from the beginning. “The old draft is used as input. However, the political decisions can be completely different,” Meutia said. No matter which model will be agreed upon in the future, Meutia reminded that the ASO’s end goal must be achieved: a diversity in broadcast content and owners.

However, Golkar politician Boby Adityo Rizaldi, who is a member of the Broadcast Commission, said that current discussions on the matter do not diverge much from period before. The input received has not changed much. “Private television stations want multiplexing to be in many hands. The government, meanwhile, wants it to be controlled by a single entity,” Bobby said on February 6.

The similarity in discussions on the draft revision of the broadcast law is mirrored in the DPR public hearing session with the four television associations. The ATVSI, whose members include major private broadcasters, want multiplexings to be in several hands. It hopes that private broadcasters currently operating will automatically get the right to execute the system. “It should not be in the hands of a single entity in order to preserve healthy competition,” said Gilang Iskandar, secretary-general of the ATVSI. “Don’t take away everything (from the private broadcasters).”

The Indonesian Association of National Television (ATVNI), which consists of new private television broadcasters such as RTV, Kompas TV, and NET TV, proposed a hybrid multimux system. In this scheme, a consortium of several television broadcasters should control the multiplexing process. “For example, the associations control it for their members,” said Rikard Bagun, the chair of ATVNI. By doing this, Rikard continued, the multimux operation could be monitored by many people in order to prevent abuse of power.

Meanwhile, the Indonesian Association of Digital Television Broadcasters supports a multiplexing system with TVRI as the single executor. Currently, the majority of digital television stations indeed broadcast through TVRI’s mux. ATSDI’s Tulus Tampubolon said the government has to regain control of public frequencies. That, he said, would create democracy in broadcasting, which paves the way of many television stations to be in healthy competition with each other. “Then everyone only needs to concentrate on good content,” he said.