THE state secretariat, through the Medan Merdeka Development Steering Committee, is protesting the Formula E race scheduled to be held this year.

The majority of participants at a committee meeting on Wednesday, February 5, expressed their disapproval of turning the National Monument area into part of the electric motorsport race circuit because of the area’s status as a cultural heritage site.

Six days after the meeting, Jakarta Governor Anies Baswedan wrote a letter to State Secretary Pratikno. In the letter dated February 11, 2020, Anies said he already received a recommendation from the Jakarta Cultural Heritage Expert Team to hold the race in Jalan Medan Merdeka and its surrounding areas. But later on, the expert team’s chairman, Mundardjito, claimed he never gave his approval as mentioned in Anies’ letter to Pratikno. “We did not make the recommendation because of the area’s important historical value,” said Mundardjito on February 12.

Anies is reluctant to respond to the debate surrounding the race’s preparations. He merely expressed his appreciation to the Medan Merdeka Development Steering Committee, which gave permission to hold the Formula E in the area. “I extend my appreciation to the Steering Committee,” he said. Anies believes that the race will promote tourism and attract investments to Indonesia.

Before the protest against the race course, the budget for hosting the Formula E race already drew protest from the Indonesian Solidarity Party (PSI) Faction in the Jakarta Regional Legislative Council (DPRD). They said the budget of Rp1.6 trillion went against the development priority scale. Anies was also criticized for cutting down 191 trees in the National Monument area, in what was believed to be part of the race’s preparations. Following the criticism, the Jakarta government replanted trees in all parts of Monas. Jakarta Secretary Saefullah says 300 trees were planted to compensate for the trees previously cut down.

Preparations for the Formula E race, scheduled for June 2020, still in progress. The government is protesting the race course, which covers parts of a cultural heritage site.

» 24 drivers from 12 teams are participating.

» Races have been held in 12 cities and 5 continents.

» The total budget proposed by Jakarta is Rp1.6 trillion, among others, for:

» Payment for the committee: Rp25 billion 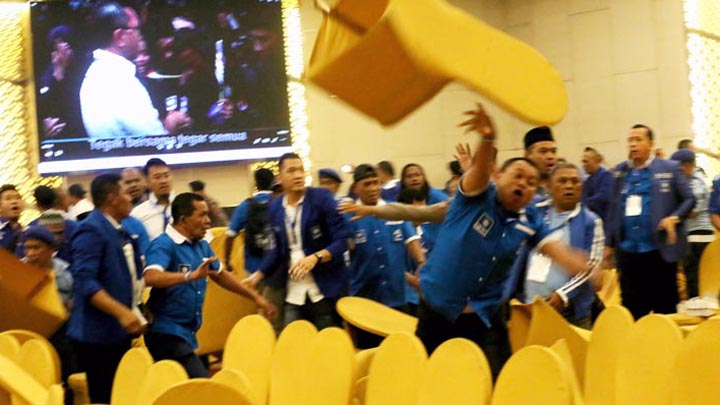 ZUKLIFLI Hasan was again elected National Mandate Party’s (PAN) general chaiman during the party’s 5th Congress in Kendari, Southeast Sulawesi on Tuesday, February 11. Zulkifli is the first person to lead PAN for two consecutive periods. Under his leadership, which will last until 2025, he aims for PAN to come out in the top three in the next general election. “(There’s) not a lot of time for us,” he said. Zulkifli managed to beat two of his contenders, Mulfachri Harahap and Drajad Wibowo.

PAN’s congress was marked with pandemonium on February 11, when supporters of general chairman candidates threw punches—as well as chairs—at each other. Mulfachri’s camp protested because some congress participants did not have the right to vote during the plenary meeting to elect a chairman. Because of the riot, the door to the hall where the congress was held was torn into pieces and two participants were injured.