IN response to the complaint submitted by Bapak Hendy Ubro Pranoto in the Letters section of Tempo, February 25-March 2, 2020 edition, we convey the following important matters.

1. Bapak Hendy Ubro Pranoto was retired on April 1, 2013 with the Presidential Decree No. 34/K/2013 dated April 11, 2013 and his active salary was discontinued based on the Statement on the Termination of Payments from the Office of Regional Income, Financial Management and Assets of the Musi Rawas Regency Administration No. 112/SKPP/2013 dated May 13, 2013. He had allowances for the wife and two children.

2. Bapak Hendy has a wife who is also a civil servant named Sopiah, working with the Musi Rawas Regency Administration.

3. Based on the results of a verification and evaluation of pension data of Taspen and active civil servant data of regency/city administrations all over Indonesia by Senior Vice President of Participation of Taspen through letter No. SRT-985/F/122019 dated December 12, 2019 on cross reference and mutual support data, there are pension recipients with their spouses as active participants of the state civil apparatus who are mutually supporting husband/wife/child allowances, including Bapak Hendy with his spouse who is an active civil servant, Ibu Sopiah.

4.
Based on the third point, Taspen of Lubuklinggau checked the relevant data and arranged coordination with the regional administration concerned. Below are the results:

• As Ibu Sopiah has had the husband allowance on the active salary list of her institution, Taspen of Lubuklinggau calculated the wife allowance overpayments on the pension list of Bapak Hendy from March 1, 2016 to January 1, 2020, resulting in his total debt to the state worth Rp20,083,100 and a monthly installment of Rp340,000 from February 2020 until its settlement in January 2025.

5. Based on Article 23 paragraph 1 of Regulation of the Director General of Treasury of the Ministry of Finance No. PER-19/PB/2015 on the procedure for disbursement and the accountability of pension fund expenditure executed by Taspen and Asabri, the deduction subjected to pension recipients by Taspen and Asabri over claims for compensation and debts to the state (arising from pension overpayments) is 30 percent of the monthly pension amount at the maximum.

6. It is worth noting that the monthly pension received by Bapak Hendy after the exclusion of the wife allowance is Rp3,837,800. Meanwhile, the sum deducted per month is only Rp340,000 (not even 9 percent and the effective provision is 30 percent at the maximum).

7. With the explanation contained in the first to sixth points, Taspen of Lubuklinggau has executed the proper working procedure pursuant to the regulations in force so that Taspen did not trap pensioners as mentioned in the letter of Bapak Hendy.

8. We have visited the residence of Bapak Hendy. After listening to the explanation as presented here, Bapak Hendy could fully understand it and was grateful for Taspen’s proactive, better and uncomplicated service for pensioners.

THE Jakarta floods in February were rather odd because no heavy rain fell in Bogor, West Java. It was only drizzling. But the floods in Jakarta even submerged the rail tracks of Dukuh Atas Station. Passengers from Bogor could only reach Manggarai and had to continue their trip by other transportations. Still they had to take roundabout ways as several areas were inundated.

While the New-Year floods were caused by rains with high intensity, the February floods were an anomaly. Perhaps what many people say is true that the condition results from climate change or the land of Jakarta is no longer capable of absorbing rain water. If this really happens, it is indeed dangerous. Sources of floods will increase: runaway floods from Bogor in the south, tidal floods from the north and no absorption in the middle.

The Jakarta government should be responsive to this phenomenon. Floods constitute a natural occurrence. There must be many flood experts in Jakarta and they should have solutions to flood handling. In my layman’s view, when the earth cannot absorb water, it means trees are lacking. If there is a shortage of trees, the government should conduct replanting and appeal to the public to grow as many trees as possible to the maximum capacity. Wallahualam (God knows the truth).

THERE is a mistake in the article titled Struggling to Unite on page 13 of Tempo, February 24-March 1, 2020 edition. In the sixth paragraph it is written, “The dwindling funds managed by Asabri and Taspen due to bad investments is one proof.” The reference to Taspen in the sentence is inaccurate. The Editor has also corrected this mistake in the digital edition.

Also, the infographic titled Indonesian Trade Balance on page 25 contains some errors. The following is the correct infographics: 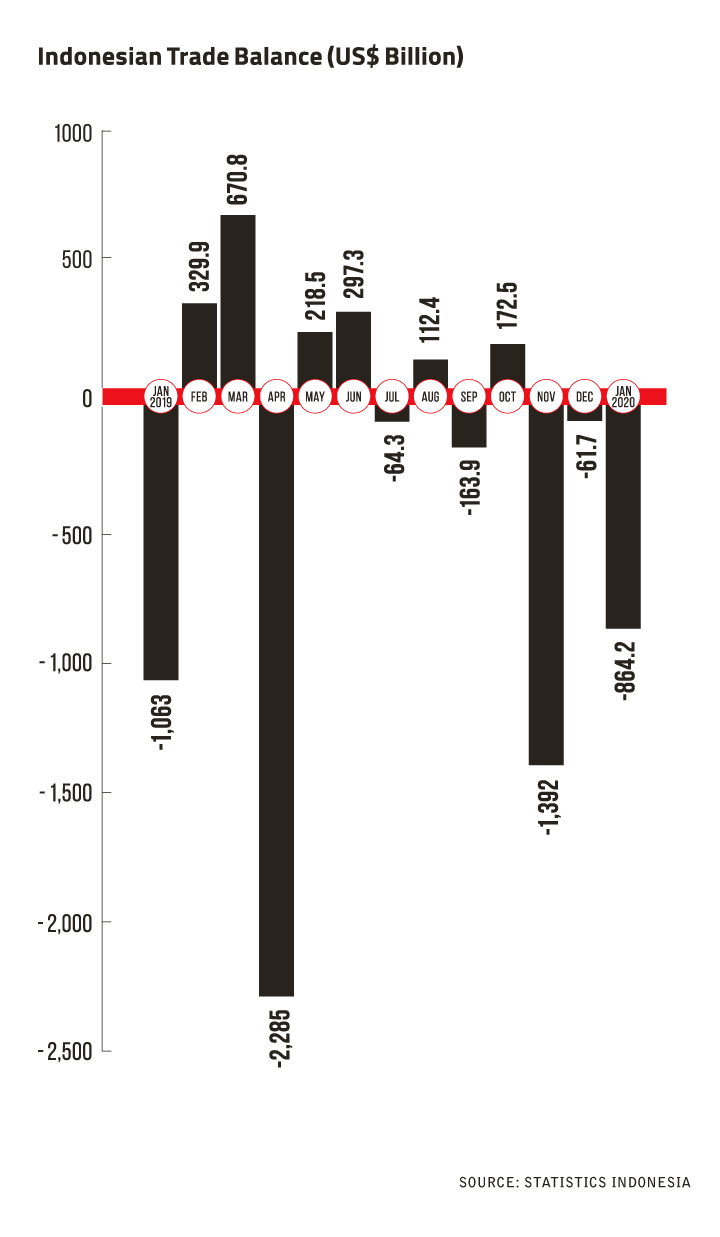 We apologize for the mistakes—Ed.