For Bird in Cage Contests


The environment and forestry ministry took five species of birds difficult to find in nature off the protected list. More consideration was given to birdbreeders than LIPI’s recommendation.

DIDIN Wahyudin proudly showed a video of his activity of releasing birds into the wild in the Ranggawulung City Forest, Subang Regency, West Java, on Saturday, February 22. Didin, who is the coordinator for West Java V Nusantara Birdbreeders Association (APBN), helped come up with the idea for the event. He said that there were about 250 birds, including protected species, which were released into the wild that day. “There were whistling thrush (Myophonus), Irian lovebirds, starlings, pale-bellied white eyes (Zosterops consobrinorum), hummingbirds, pigeons, yellow-vented bulbul (Pycnonotus goiavier), and bar-winged prinia (Prinia familiaris),” said Didin, on Wednesday, February 26.

The release of those kept birds into the wild, said Didin, demonstrates that birdbreeders such as himself care for the environment. He has kept six pairs of white-rumped shama (Kittacincla malabarica) at his home since 2016. There is also a bar-winged prinia, which is a recent addition, a Chinese hwamei (Garrulax canorus), and a black-throated laughingthrush (Garrulax chinensis). “So that (our) children and grandchildren will be able to hear the chirping of birds,” he said about the release of those caged birds.

According to Dody Naga, APBN national coordinator, their organization has released birds into the wild on three occasions. The first was the release of a Bali myna (Leucopsar rothschildi) at West Bali National Park on July 16, 2018. “During that activity, Teten Masduki, a figure from Kicau Mania bird lovers community, had the idea to form an association for birdbreeders,” he said. “This idea was welcomed by Mahfud Sulaiman, who initiated it, and then named me the national coordinator of the National Birdbreeders Association.”

The creation of the APBN, Dody explained, was a reaction to the issuance of  the Minister of the Environment and Forestry Regulation No. 20/2018 regarding the types of protected plants and wildlife, which included three species of birds, namely white-rumped shama, straw-headed bulbul (Pycnonotus zeylanicus), and Javan pied starling (Gracupica jalla), as protected wildlife. According to Dody, they opposed that regulation because it will add red tape and criminalize birdbreeders. “As a result, the hobby of bird enthusiasts will be obstructed,” said Dody, who said he has three pairs of white-rumped shama at his home.

According to Dody, the growth of songbird competitions has created a lot of activity in the bird lovers community. He cited that a six-month old white-rumped shama, which used to be worth Rp1 million, is now valued at Rp2.5 million. Birds which are ready to take part in competitions, said Dody, can be worth up to Rp20 million. The selling price of a winner of a national-level contest is as high as Rp1 billion. “Bird contests also stimulate the economy of the lower class, from the competition committee, jury, vendors, renting out land for parking, and people who make bird cages and accessories,” he said. 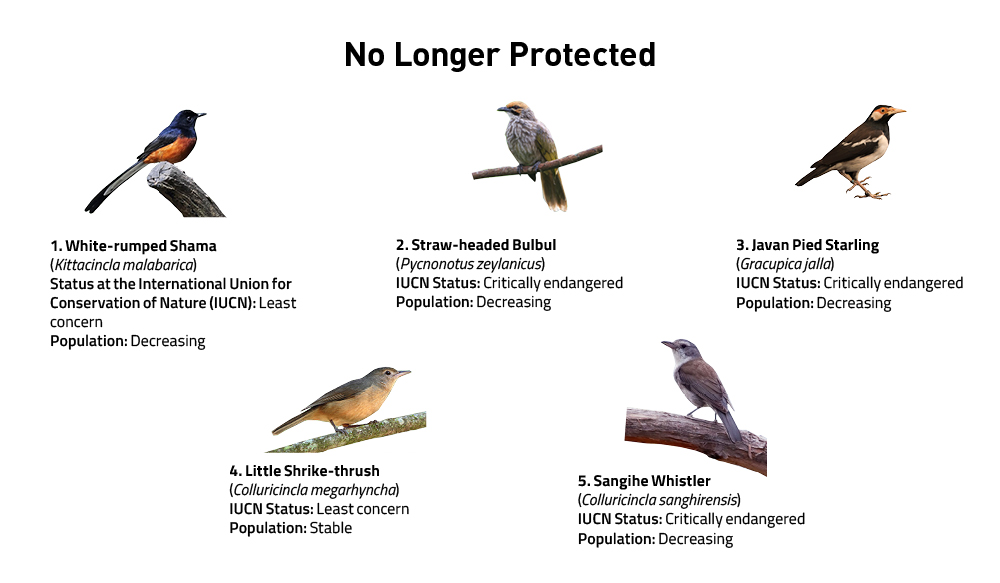 Dody did not deny that the survey of the Indonesian Institute of Sciences (LIPI) said that the population of those three species of birds in-situ is small and they are difficult to find in the woods. However, ex-situ, said Dody, they have been able to raise birds in breeding sites on a large scale. “I have collected data in just three days that there are 3,500 birdbreeders for the white-rumped shama. One birdkeeper could have a pair of them,” he said.

Dewi Malia Prawiradilaga, an ornithologist from LIPI’s Biological Research Center, said that protection for the three species of birds is for those which are in the wild and not for those which are in breeding sites. “As for those in breeding, it’s fine. It is actually good if they can keep them and then later release them into the wild,” she said. According to her, there is an understanding among birdbreeders that their kept birds are going to be equated with those in the wild. “Actually, that protection is to help them as well, so that those birds do not become extinct in nature,” said Dewi.

As a scientific authority, according to Dewi, LIPI has given a recommendation to the environment and forestry ministry that has the authority for putting species on, or taking them off of, the endangered list. “Usually we prioritize endemic species and those which are known to be rare globally, or those which are rarely encountered despite having a wide distribution,” she said. Dewi, who represents LIPI in deliberations with the environment ministry, said that those three species are difficult to encounter in the wild, and therefore it is recommended that they be protected.

The results of LIPI’s research are backed up by observations done by bird-watchers all over Indonesia using the Burungnesia application. According to Swiss Winasis, developer of the Android-based application Burungnesia with over 2,300 members, there are very few records on those three species of bird in the wild. “Observation data from 2016 for the white-rumped shama is just 14 individuals, with the last sighting in 2019. For the Javan pied starling there are three records, the last sighting in 2019. The straw-headed bulbul has not been seen,” Swiss said to Tempo via text messages on February 28.

Suer Suryadi, a conservation and legal advisor of the Conservation and Legal Assistance Network, believes that LIPI’s recommendation was ignored by the environment ministry. This was proven on August 30, 2018, two months after the issuance of Government Regulation No. 20/2018, when Minister Siti Nurbaya signed Minister Regulation No. 92/2018 on the amendment to Minister Regulation No. 20/2018. “In that regulation not only those three species of birds were taken off the protected list, but also two others, namely the endemic little shrike-thrush (Colluricincla megarhyncha) and sangihe whistler (Colluricincla sanghirensis),” said Suer.

According to Suer, the environment minister has given more consideration to the protests of birdbreeders than the recommendation of LIPI. He can see that from the articles added to Minister Regulation No. 92/2018, which is the new norm not to be found in the higher regulation, namely Government Regulation No. 7/1999 on the preservation of species of plants and wildlife. “Article 1A clause 2 makes special mention of birds, taking note of the number of breeders, number of birdkeeping hobbyists, and contests,” said Suer.

Whereas, said Suer, four of the 10 species which were taken off that protected list are in the book Priority Tree Species for Conservation and the Proposed National Conservation Strategy for 2019-2028 which was made by LIPI, the Forest Research and Development Center of the Environment and Forestry Ministry, and the Indonesian Rare Trees Forum.