Two prosecutors are suspected of extorting a witness in the Hambalang sports complex corruption case. The Attorney General’s Office has not yet punished them despite clear evidence.

LOOKING downcast, Erda hastily entered the Corruption Eradication Commission (KPK) building on Friday, March 6. She wanted to meet with officials in the public complaint department. “I want to ask about the follow-up of the report on the irregularities in the legal process against my husband, including the matter of suspected extortion,” she said.

The voice of Erda, the wife of suspect in a criminal tax case, Roni Wijaya, was explosive. Her lawyer, Muhammad Syahputra Sandiyudha, who accompanied her to the KPK building, explained the actions of the two prosecutors who extorted his client. Those two prosecutors are said to have used the case of suspected tax violations against her husband for extortion purposes. Erda has given them about Rp70 million.

Two prosecutors with initials M and SP have handled Roni’s case since it was investigated by the directorate-general of taxation. M heads the sub-directorate under the deputy attorney general for special crimes. While SP is a prosecutor who has handled the corruption of self-managed flood control funds of the Central Jakarta office of water management.

According to Sandiyudha, the irregularities in his client’s case began while the case file was still being handled by tax investigators. Every time Erda and Roni asked about the progress of the investigation, they were always directed to meet M or SP. SP asked Erda to pay the shopping bills of the two prosecutors. Erda was also asked for Rp200 million if she did not want the case to be immediately sent to the public prosecutor’s office.

Erda has complete evidence of this extortion. Sandiyudha showed a bill for the purchase of Easecox healthy shirt in the name of M for Rp21 million. There is another bill in the name of SP for Rp40 million. She paid those bills on November 4, 2019 through a bank account in Bank Negara Indonesia. Erda also has proof of purchasing for an airline ticket to Makassar for SP and payment of a hotel room in M’s name.

According to Sandiyudha, those payments were condition set by those two prosecutors if Erda wanted her husband’s case dossier, which was initially set to be turned over to the court in August 2019, be delayed until February 2020. Not all those requests came directly from those two. Some requests were made through an intermediary trusted by the two prosecutors. “The case was finally delayed,” said Sandiyudha.

Unsatisfied with what they had received, they asked for more money. In early January, M and SP again offered to delay turning over Roni’s case file until August 2020 if Erda was willing to pay Rp200 million. She turned down that offer after consulting with KPK officials. “This is extortion,” said Sandiyudha.

After turning down their offer, M and SP sped up the case process. The investigation document of the directorate-general of taxation was found to be complete (P-21). Roni was immediately targeted for arrest after the case was submitted on February 4. A week later prosecutors asked the police to arrest Roni. The former director of operations at Dutasari Citra Laras is currently being held in Cipinang prison in Jakarta. 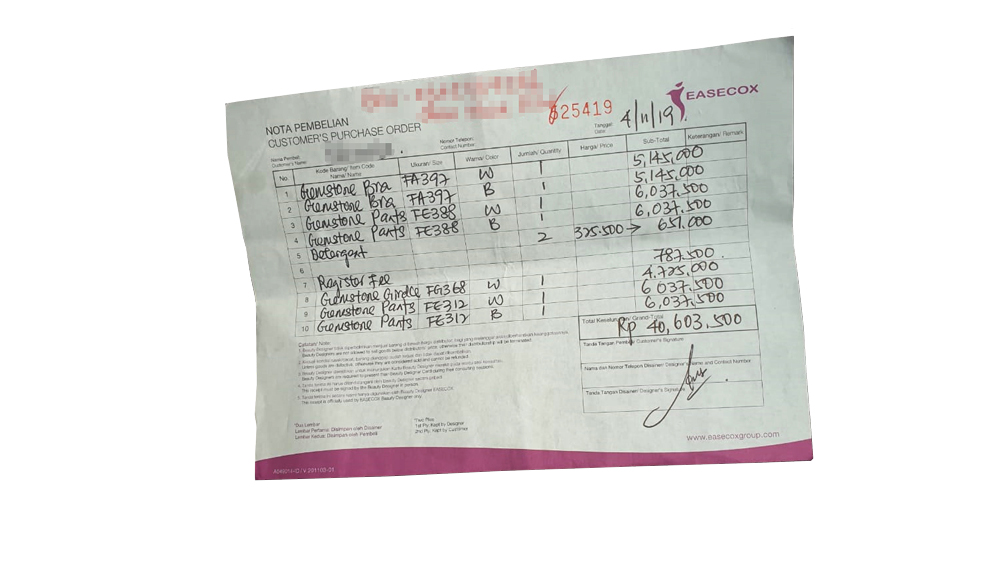 Receipt to the purchase of health clothing under the name of a prosecutor with the initial SP./Special Photo

Roni reported this irregularity in the legal process to the KPK last January. In addition to report the extortion, Erda questions the evidence being used to indict her husband. There is a problem with the evidence because it has already being tested in the court on the Hambalang sports complex corruption case which implicated Mahfud Suroso, Roni’s colleague at Dutasari Citra Laras. Mahfud was CEO of that company which was sub-contracted in the Hambalang project.

In addition to going to the KPK, Erda reported the extortion to the Attorney General. However, no clarification has ever been given regarding her complaint. Rather than receiving a response, Roni was instead arrested. The arrest was made a week after their legal team wrote to the Attorney General. “My husband is a KPK witness. Why is he being criminalized?” said Sandiyudha, quoting Erda’s frustration.

Hari Setiyono, head of the legal information center at the Attorney General’s Office (AGO), verified having that report. According to him, the deputy attorney general for supervision is currently checking on suspected violations by the two prosecutors. The AGO is also changing the composition of the prosecutors team working on Roni’s case. M and SP are no longer working on that case. “So far there is no conclusion which finds those two guilty of something,” he said.

According to Hari, the investigation into those two does not stop the legal process against Roni. The case file has been declared complete. At this time, he said, the team of prosecutors is preparing the charges so that the case can soon be turned over to the court. “Multiple charges will be made in regard to indications of tax violations and money laundering,” said Hari.

THE extortion of Erda and Roni Wijaya began with an investigation into a tax case by the directorate-general of taxation in mid-2019. The tax directorate initially wanted to collect on the tax arrears of Dutasari Citra Laras in the Hambalang project as a tax violation. The company has not been active since being embroiled in the corruption case. For that reason, the tax directorate went after the company’s stockholders to take responsibility.

The company’s deed says that its ownership consists of four nominees. It stated Mahfud Suroso as the CEO. Mahfud also has 2,200 shares, equivalent to 40 percent of company’s stock ownership. Three others have equal 20 percent shares. They are: Roni Wijaya, MSONS Capital, and Athiyyah Laila, the wife of former Democrat Party general chairman Anas Urbaningrum.

Through another lawyer, Haris Azhar, Roni is surprised that the investigation into the case only focused on him. According to him, responsibility should fall to the four nominees according to their portions of share ownership. This irregularity could be seen in 2017 when the tax directorate asked him to pay a bill of Rp3.8 billion, citing that they were carrying out the court verdict in the Mahfud Suroso case.

Roni protested this decision. Acording to him, his responsibility for that tax bill is only Rp777 million or about 20 percent of stock ownership. However, the directorate-general of taxation ignored this argument. Roni was arrested in December 2019 and was only released after the tax directorate auctioned off a building owned by Dutasari in Pondok Indah, South Jakarta.

As it turned out, that compensation did not free Roni from potential criminal charge. An investigation by the directorate-general of taxation resumed in 2019. The reason being was to indict stockholders of Dutasari through tax crime and money laundering. Once again, only Roni was targeted. The evidence used to indict Roni was the same used to indict Mahfud Suroso.

Sigit Danang Joyo, chief of the legal assistance sub-directorate at the finance ministry, denied the claim that they are only targeting Roni. According to him, the gijzeling or compensation mechanism is only for cases with binding legal status. Tax crime case like the one against Roni uses a different approach. “The evidence which was tested before was only for a corruption case, not a tax crime,” said Sigit.

According to Sigit, tax crime can be separated from corruption cases being handled by the KPK. Questions regarding that investigation, he continued, have been answered by the ministry when responding to Roni’s pre-trial suit at the South Jakarta District Court. The judge rejected that lawsuit. “The material being used was not about the investigation procedure, but already touches upon the substance of the case,” he said. 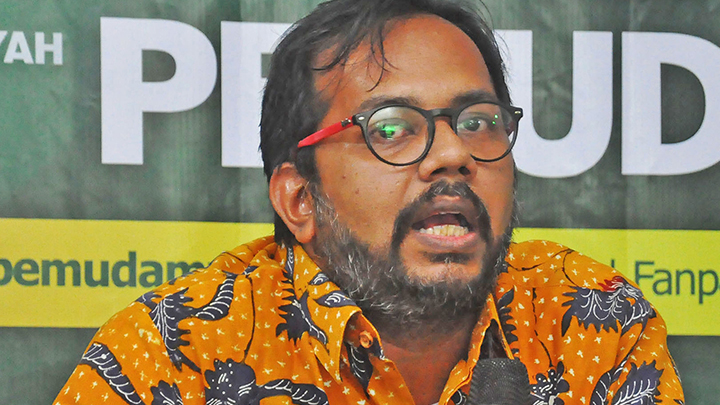 In the Hambalang corruption case, the court sentenced Mahfud to six years imprisonment and a fine of Rp600 million. He was proven to have ordered his subordinates to make fictitious invoices. This is where the irregularities began. Unlike the court verdict, witness testimony in the case being investigated by the directorate-general of taxation states that those invoices were made upon Roni’s order. “Why are they ignoring the facts from the trial?” said Haris Azhar.

Haris considers that the legal process against his client is being forced. This is because Roni is a witness under the protection of the KPK and the Witness and Victim Protection Agency. Bringing criminal charges against his client could erode public trust in the witness protection system. “There is strong suspicion that this legal process is being paid for by the party who suffered losses due to my client’s testimony,” he said.

Susilaningtias, a commissioner at the Witness and Victim Protection Agency, said that her institution has written to the directorate-general of taxation to ask about Roni’s case. This letter was made upon Roni’s request after consulting with the KPK. “We ask the directorate-general of taxation to consider the suspect’s contribution in exposing the Hambalang case,” he said.

The letter sent by the KPK to the AGO on August 20, 2019, strengthened the testimony of Haris and Susi. It reminded the Attorney General about the memorandum of understanding of some law enforcement institutions related to the handling of cases. The first point of the letter mentions that Roni is a witness in a corruption case still being handled by the KPK.

KPK Spokesman Ali Fikri verified the news that Roni has received protection from the KPK. Even so, he said, the KPK respects the ongoing process at the directorate-general of taxation and the AGO. “Our authority is only to handle corruption cases. If another institution investigates through another route, that is their authority,” he said.