Parties supporting the government are not unanimous about passing the omnibus law. Intelligence officers are approaching labor groups in the provinces.

MEETING with top officials of the political parties supporting his administration at the State Palace on Friday, March 6, President Joko Widodo could not hide his irritation. After discussing the coronavirus issue, Jokowi asked about the developments on the deliberations over the omnibus law in the House of Representatives (DPR). “The President wants the DPR to deliberate it as soon as possible,” said Ahmad Ali, Deputy General Chairman of the National Democrat (NasDem) Party to Tempo, March 11.

At that time, Ali accompanied NasDem General Chairman Surya Paloh and Secretary-General Johnny Gerard Plate, who is also minister of communication and informatics. Golkar Party General Chairman Airlangga Hartarto was there with his deputy Azis Syamsuddin. General Chairperson of the Indonesian Democratic Party of Struggle (PDI-P) Megawati Sukarnoputri attended together with Secretary-General Hasto Kristiyanto and Utut Adianto, PDI-P Faction chair in the DPR.

According to Ali, the President asked Airlangga Hartarto, who is also coordinating minister for the economy and heads the drafting of the omnibus law, to explain the grouping of issues and articles in that bill which are opposed by the public. For instance, there is the matter of wages and pension guarantees in the Job Creation Bill. After that came the turn of Airlangga’s colleague, who is also DPR Deputy Speaker, Azis Syamsuddin, to explain the progress of deliberations on the omnibus law in the legislature.

Azis said that he explained to Jokowi the deliberation process for each draft regulation at the DPR after receiving a letter from the president. A team from the DPR studied the letter before discussing it in a meeting of the House leadership. “Its current position is waiting for a meeting invitation from the DPR speaker,” said Azis, saying what he told Jokowi.

Two high-ranking party officials who attended that meeting said the President’s expression changed after hearing Azis’ explanation. The President’s letter about deliberations on the omnibus law was received by the DPR on February 12. Jokowi wants the deliberations on four bills, namely the Job Creation Bill, the Taxation and Economic Strengthening Bill, the Pharmaceuticals Bill, and the Capital City Bill, to be completed in 100 days.

DPR Speaker Puan Maharani did not attend that meeting at the Palace because she was abroad. She previously mentioned that a leadership meeting has not been held yet because the government and the DPR need to study and disseminate the bill on the omnibus law so as to not create public unrest. “If you want it faster than 100 days, the DPR can do it. However, will that be beneficial for the public or not?” said Puan, on February 27.

The meeting at the Palace heated up. This is because NasDem General Chairman Surya Paloh and PDI-P General Chairperson Megawati Sukarnoputri had a difference of opinion. Two sources who often attend coalition meetings at the Palace said that Surya Paloh, who usually speaks last, asked the coalition to get solidly behind deliberating the omnibus law and not holding it back among the DPR leadership. Megawati, according to the same sources, asked that the deliberations not be conducted hastily, because the DPR leadership is currently studying it.

Ahmad Ali verified Surya Paloh’s statement. He claims that his boss wants the deliberations to be expedited so that Indonesia can avoid the impact of a weakening global economy. PDI-P Deputy Secretary-General Utut Adianto said the exact opposite, that it does need to be expedited, but must be done with thorough study. It was said that the meeting heated up due to this difference of opinion between NasDem and the PDI-P. “No, it was nothing unusual,” said this PDI-P Faction chairman.

The PDI-P, said Utut, has formed a team to study the omnibus law bill. Party leaders have taken part in discussing the bill with party cadres who are regional government heads because they deal with some regional authority being reinvested in the hands of the central government. For example, the Job Creation Bill states that regional regulations can be revoked by a presidential regulation if they clash with higher-level regulations.

According to Utut, their party is being cautious in deliberating the omnibus law because many PDI-P voters are labor who are against this regulation. Several labor groups consider that some articles in the Job Creation Bill are detrimental to their interests, such as reducing the severance pay for laid off workers, no protection for workers from outsourcing, and making it more difficult for contracted workers to become permanent employees.

Presidential Spokesman Fadjroel Rachman said that when closing the meeting the President asked that the deliberations on the bills proposed by the government move forward smoothly in the DPR. “It would be best if the coalition parties productively cooperate,” said Fadjroel.

The government has taken several steps to facilitate the passing of the omnibus law, something which was touted by President Joko Widodo during his inauguration on October 20, 2019, aimed at easing investment. In mid-January, Jokowi asked the police, the State Intelligence Agency (BIN), and Attorney General’s Offices (AGO) to disseminate the omnibus law to those who were against it. He hopes that such efforts can facilitate deliberations in the DPR.

Said Iqbal, president of the Confederation of Indonesian Trade Unions (KSPI), verified the involvement of the police and BIN. He said that in mid-January, some representatives from labor unions attended a meeting at Dharmawangsa Hotel, Jakarta. This meeting was held after workers came out against the draft of the omnibus law, because they considered it was more beneficial for business owners and was detrimental to workers. Said, who at the end of September 2019 met Jokowi, considers the government to have broken its promise because it did not involve workers in drafting the omnibus law. “The points which came out were different from what was talked about,” said Said.

That meeting at Dharmawangsa Hotel, according to Said, was attended by Coordinating Minister for the Economy Airlangga Hartarto, Minister of Industry Agus Gumiwang Kartasasmita, and Minister of Labor Ida Fauziyah. This meeting was also attended by high-ranking officials of the National Police and BIN. Said stated, three cabinet ministers promised to discuss the draft of the omnibus law with labor groups and to form a joint task force. Later on, no task force was operating and workers were not being involved in the deliberations or the writing of the draft of the omnibus law which was submitted by the executive branch to the DPR on February 12.

Airlangga, Agus, and Ida verified attending that meeting. Senior Comsr. Asep Adi Saputra, chief of the public information section of the public relations division of the National Police, said that this meeting was limited to dissemination. BIN Spokesman Wawan Hari Purwanto said that this dissemination was aimed at opening a dialogue to avoid a miscommunication between the government and group opposed to the omnibus law.

According to Wawan, intelligence officers were already operating in the provinces before the president assigned BIN and law enforcement institutions to approach the groups opposed to the omnibus bill. “We continue to act, and do not only wait for orders,” he said on March 13. 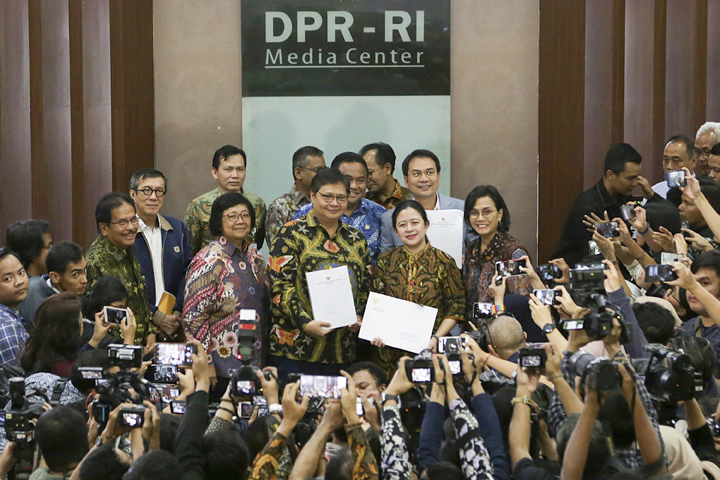 Coordinating Minister for the Economy Airlangga Hartarto submits a letter to the President and a draft of the Job Creation Bill to DPR Speaker Puan Maharani at the Parliament Complex in Senayan, Jakarta, last February. TEMPO/M. Taufan Rengganis

Satya Agung, Chairman of the Labor Union at Jatim Autocomp Indonesia (JAI), a factory which produces automobile cable installations, said that an impromptu meeting was held at the gathering hall at his office in Pasuruan, East Java, on March 5, which was attended by personnel from BIN, the police and the Indonesian Military (TNI). The JAI Labor Union, said Satya, is indeed against the omnibus law. JAI Human Resources Department Manager Imam Suroso verified the news about that meeting attended by 22 people. “They suddenly showed up,” he said.

After initially discussing the relationship between worker and company, the meeting moved on to the matter of the omnibus bill. Satya said that intelligence officers asked the labor union not to worry that the omnibus law would be detrimental for workers. Satya challenged one of them to point out any article from it which is beneficial for workers. “He could not answer,” he said.

Rejection of the omnibus law then grew and involved non-labor groups. In Yogyakarta, thousands of students from several universities, along with workers and some civilian groups, stage a protest in Jalan Gejayan, Sleman Regency, on Monday, March 9. Calling themselves the People’s Alliance Moves, they demanded that the omnibus law bill not be deliberated in the DPR.

Before holding this protest, the Alliance studied the 104-page bill. The result indicated that the omnibus bill was dangerous from various aspects, such as intervention with the press and threats to environmental protection. “The omnibus law is dangerous to be passed,” said Kontra Tirano, spokesman for the People’s Alliance Moves.

This movement was attacked on the internet. They were accused of being a paid protest, and a reference to the #GejayanGerakanProvokasi (Gejayan Provocation Movement) appeared in the social media. Responding to this rejection, Dini Purwono, a presidential special staff member for legal affairs, claimed that the president has no intention for the omnibus law to be detrimental for workers, but is trying to protect micro, small and medium-scale enterprises as well as workers.

A demonstration against the omnibus law bill was held in Makassar, South Sulawesi, on March 13. Protest leader Andi Asdi said that opposition will continue to mount until work on passing the omnibus law stops. He said that he will take part in a series of protests in a number of areas this coming Monday, March 23. The plan is for workers to hold mass strikes.