The Supreme Court has annulled the premium hike of the National Health Insurance Program. Efforts to improve the finances of BPJS Kesehatan is now in jeopardy.

THE plenary meeting of the National Social Security Council (DJSN) on Wednesday midday, March 11, was concluded. However, the meeting which was meant to discuss the impact of the Supreme Court’s latest decision on the National Health Insurance (JKN) program did not come to a conclusion on what steps to recommend to the government. The council, set up by the president, chose to wait for the Court’s documents on the decision to annul a part of the JKN’s premium increase. “We will read the case and its decision, as this Supreme Court’s judicial review was done behind closed doors,” said DJSN member Asih Eka Putri after the meeting.

This DJSN plenary meeting was not the only meeting that did not result in a solution for the new problem for the JKN program. The same went for the coordinating meeting organized by the coordinating ministry for human development and cultural affairs on March 12: waiting for the official Supreme Court documents. The meeting concluded that public communication regarding this matter will be conveyed by one minister on behalf of the government.

News that the Supreme Court has annulled the Health Care and Social Security Agency (BPJS Kesehatan) premium increase was disclosed by Court’s Judge Andi Samsan Nganro on March 9. This Supreme Court spokesman said that his institution has granted plaintiffs a portion of their claims in the judicial review of Presidential Regulation No. 75/2019 regarding National Health Insurance on February 27. 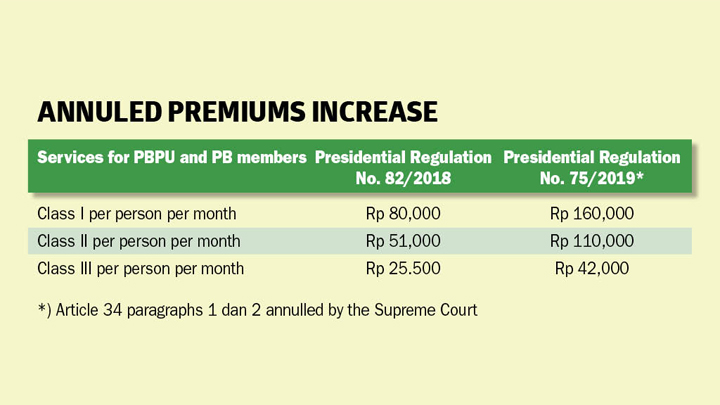 Signed by President Joko Widodo on October 24, 2019, this presidential regulation stipulated an increase in health insurance premium, which previously was set in Presidential Regulation No. 82/ 2018. Plaintiffs, grouped in the Indonesian Community of Dialysis Patients, asked that the Supreme Court states that the new regulation would not have legal force. However, Andi said, the Court only annulled the ones stipulated in article 34, paragraphs 1 and 2, which specifically regulate dues for JKN members who are non-wage recipients (PBPU) and non-labors (BP).

Various reactions were expressed regarding this decision. Some praised the Supreme Court and urged the government to immediately carry out the decision. However, Finance Minister Sri Mulyani Indrawati said that the government will study the impact of this verdict. She pointed out that the government had considered all aspects when it designed and issued the presidential regulation. Thus, the minister continued, the annulment of even one article would influence the continuity of the JKN program. “We hope that the people know that this has substantial consequences on the JKN,” she said in Jakarta on March 10.

THE government raised the health insurance premium following a widening deficit of BPJS Kesehatan’s finances in 2019. Using the realization of the budget as of June 2019, the Finance and Develompnet Supervision Agency (BPKP) audit estimated that the annual deficit last year was around Rp32.87 trillion.

The claim that the deficit is caused by the disproportionate income from premiums and payment for claims, is actually nothing new. In its first year of operations in 2014, BPJS Kesehatan already suffered a deficit of Rp3.3 trillion. This worsened from year to year, forcing the state to prop some, though not all, of the deficit.

In 2019, for example, the government injected Rp13.4 trillion into the BPJS Kesehatan. However, even with this support, the institution still ended the year with Rp15.5 trillion in the red. The premium increase, including for the PBPU and BP categories—which have just now been overturned by the Supreme Court—was one of the options to add funds in order to patch up the huge deficit. Thus, this situation is the reason why the finance ministry is worried about the premium increase annulment. 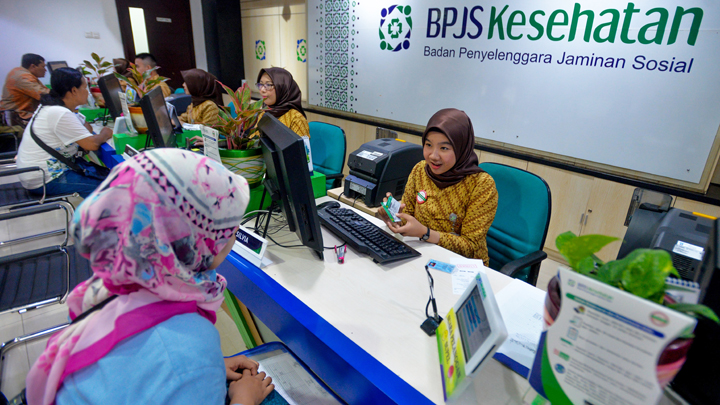 On February 18, a number of the House of Representatives (DPR) members urged the government to cancel plans to increase the BPJS premiums. In a joint meeting between DPR’s inter-commissions and the government, Sri Mulyani countered this request by warning that the state will retract its 2019 support, amounting to Rp13.4 trillion, if the premium increase were to be canceled. “No problem if we do that. If you gentlemen want this to be canceled, then I will pull back the finance ministry’s transfer of Rp13.5 trillion from 2019,” she said in the meeting at the Special Committee Room B in the parliamentary complex.

Sri said that the Rp13.5 trillion funds injection for BPJS Kesehatan last year took into consideration the premium increase for Beneficiary Dues (PBI) members, which are those who receive state assistance to pay their BPJS dues. Unlike the PBPU and PB categories which were effective on January 1, 2020, the PBI premium increase—which is fully covered by the regional and central government—was calculated starting in August 2019.

An official familiar with these calculations said that the Supreme Court decision, although not completely canceling the premium hike stipulated in the Presidential Regulation No. 75/2019 would have an impact on BPJS Kesehatan’s cash flow. “Consequently, payments to hospitals which has been going more smoothly could potentially fall behind again,” the official said. BPJS Kesehatan is known to always be behind in its payments to hospitals for services rendered. Lately, a number of hospitals said that these payments have improved since the premium hike, with delays of only two months instead of the regular four months. 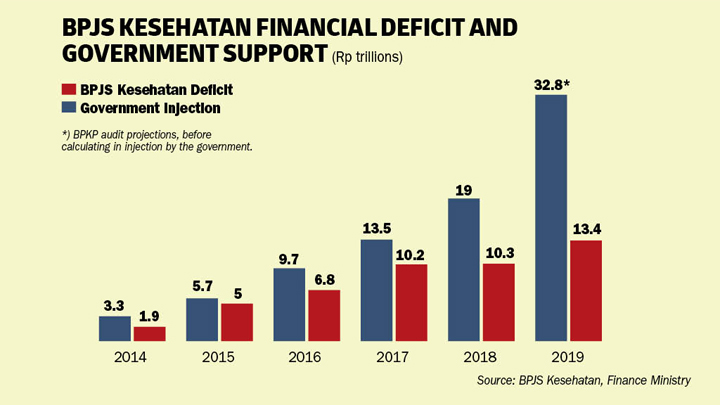 The cancelation of premium hikes for the PBPU and PB categories would automatically lower BPJS Kesehatan’s potential income. Until October 2019, members in these categories reached 35.9 million people, or 16 percent of total JKN participants. With the premium hike, receipts from member dues in the two categories would have amounted to Rp29.2 trillion in 2020.

The other problem is that BPJS Kesehatan’s deficit these years was mostly due to the PBPU participants, sometimes also called informal workers. This category also has a low level of collectability. If the premium hike for this group is annulled, and its collectability level does not improve, it is almost certain that BPJS Kesehatan’s deficit will soar again.

BPJS Kesehatan CEO Fachmi Idris is not yet able to determine how his institution would overcome this Supreme Court decision. Similar to the government, until March 13, Fachmi has yet to receive a copy of the Court’s decision. 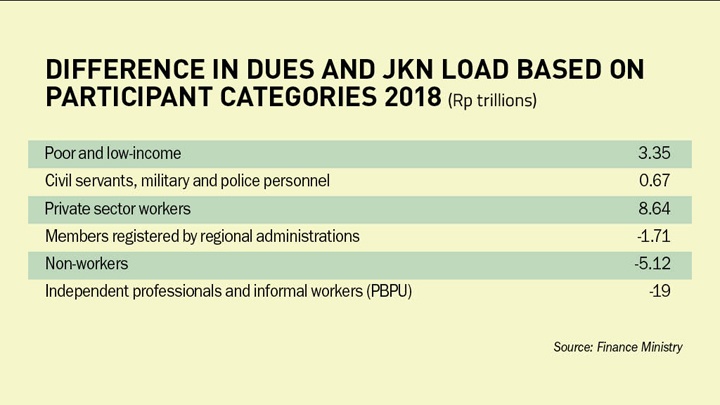 DIFFERENCE IN DUES AND JKN LOAD BASED ON PARTICIPANT CATEGORIES 2018

Fachmi said that the impact of the Supreme Court’s decision would depend on whether the annulment applies to all participants, or only for those in the PBPU and PB categories. BPJS Kesehatan, Fachmi continued, also needs further clarification on the timing of the decision: whether it would be on the date of the decision, or retroactive. “Whatever the decision would be, of course we will re-calculate the cash flow projection for 2020, and how big the deficit would be,” he said.

In any case, Fachmi said, there are only three choices, or a combination thereof, to counter the deficit: raising the premium, adjusting the service benefit, or injecting additional fund from the state budget. The first choice has now been partially annulled by the Supreme Court. “Naturally we go to the second choice, benefit adjustment, or the third choice of funds injection,” Fachmi said. “With the government’s current fiscal climate, an injection of funds would surely be tough.”

FROM the point of view of the Corruption Eradication Commission (KPK), the disproportionate premiums is not the only cause for BPJS Kesehatan’s deficit. KPK’s prevention division has given Health Minister Terawan Agus Putranto a list of recommendations to overcome this problem in November 2019.

In its review, the KPK has found that many hospitals in the regions have class classifications which are not in line with conditions on the ground. “For example, a hospital only has ‘C’ class capacity, but it would be included in the ‘B’ category,” Pahala said.

This inappropriate classification in hospitals has actually also been discovered in the BPKP audit. The audit results, released in 2019, noted that hospital classes indicated on contracts do not match the facts on the ground. After a review, some 615 hospitals had to lower its classification, out of which 192 were owned by regional administrations. Just based on this one point, the BPKP estimated that BPJS Kesehatan could potentially receive an additional Rp143 billion for the 2019 budget year. 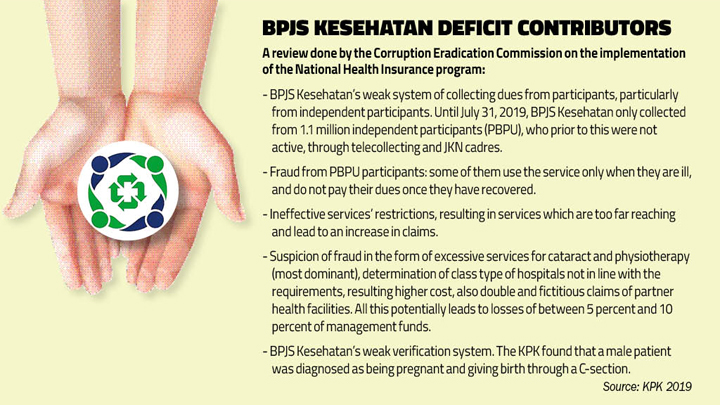 The KPK prevention team actually came up with an even bigger discovery: 898 hospitals had unqualified classifications. As a result, costs claimed to BPJS Kesehatan were too high. Health services in class II category, for example, would be claimed as class I services to BPJS Kesehatan. Pahala said that according to calculations done by his institution, if this class issue were to be fixed, BPJS Kesehatan’s claims would go down by Rp6.6 trillion.

The government is also asked to review the options of restricting the costly health services. The KPK refers to application standards in other countries such as Thailand, Japan, and France, which restrict budgets for catastrophic illnesses. There is also the global budget and performance-based payment concept for hospitals, such as those in Germany, Japan, and some states in the US. On the other hand, BPJS Kesehatan is asked to improve its claims verification system for participants, or consider cooperation with other parties in order to lower premium arrears.

Pahala is optimistic that if the government and BPJS Kesehatan act on the KPK’s recommendations, then insurance costs could be contained. The KPK even estimates that the total savings from carrying out the recommendations could reach up to Rp12.2 trillion, which could be a solution for BPJS Kesehatan’s deficit without hiking premiums.

Budi Mohamad Arief, deputy director for BPJS Kesehatan’s health referral cost insurance, said that his institution has acted on KPK’s recommendations. One way was to apply electronic medical records for patients in its claims. By doing this, the verification process will become easier and faster.

Meanwhile, Fachmi Idris assured that BPJS Kesehatan has done a range of improvements in line with the BPKP audit. “In general, we continue to do them on the ground, like cleaning up the data of 2.7 million participants,” he said.