Lasma Natalia counseled the residents of Indramayu and Cirebon in their struggle against a coal-fired power plant construction project. She helps with legal education and assistance during trial.

AS far as her eyes could see, Lasma Natalia Hillo Panjaitan saw that the leaves were no longer green. In Mekarsari village, Indramayu Regency, West Java, the trees and grounds were covered in dust. That was Lasma’s impression upon her first visit to the area, some five years ago.

Lasma, a public advocate from the Bandung Legal Aid Institute (LBH), noted that her shoes, bag, and hands also turned gray. “I spent a brief time outside, and came back covered in dust,” she said when Tempo met her in Bandung, West Java, Saturday, April 18.

The West Java branch of the Indonesian Forum for the Environment (Walhi) brought Lasma to Mekarsari to advocate for its residents. They intended to file a lawsuit demanding the cancellation of Indramayu II construction project, a coal-fired steam power plant (PLTU) capable of generating 2 x 1,000 megawatts of electricity. In 2015, President Joko Widodo announced the construction program of power plants all over Indonesia with a combined capacity of 35,000 megawatts. The Indramayu II PLTU is part of that plan.

Residents of Mekarsari rejected the power plant’s construction because they had been feeling the impact wrought by the Indramayu I PLTU, which began operation in 2011 in Sumuradem, a neighboring village. Residents complained about coal burning pollution from the 3 x 330 megawatt power plant coming inside their homes. Arable lands became fewer, some being taken up by the project. “Farm produce also went down very far due to pollution. Coconut trees are no more,” said Rodi, a resident of Mekarsari.

With her experience advocating in environmental and agrarian cases in other regions, Lasma decided to help the residents of Mekarsari. In 2015, she assisted them in taking legal action against land use for the project. She rented a public transport vehicle and went to the Indramayu District Court together with the villagers

During the two-hour trip, she heard a story from a woman who had to let go of her land in the Indramayu II PLTU project planned area. She bought the land using savings from her work as an overseas migrant worker, hoping that it could later provide income for her and her family. After trying to fight on her own, she finally gave up.

Their land transfer lawsuit failed in court. Undeterred, Lasma and her colleagues in the Bandung LBH and Walhi gathered information regarding the project’s environmental permits and environmental impact analyses (AMDAL). “After examining them, we discovered a procedural error in the AMDAL,” said the graduate of Padjajaran University. Lasma said she had no environmental science background. However, she and the village residents studied the method and process of the AMDAL.

Under the banner of Indramayu No Coal Smoke Network (Jatayu), Lasma and the residents of Mekarsari filed a lawsuit against the AMDAL to the Bandung State Administrative Court. On December 6, 2017, the panel of judges concluded that procedural and substantial errors were found in the construction of the Indramayu II PLTU. Issuance of the environmental permit was deemed to be in error by the judge because it was not preceded by a decree of environmental feasibility. The permit was also issued without participation from affected local residents. 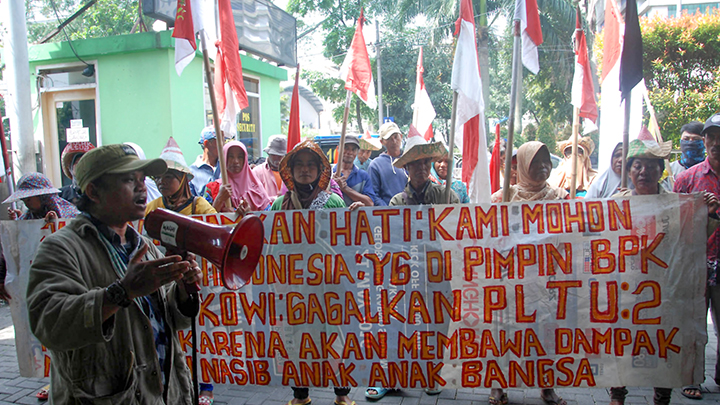 Residents of Mekarsari village were delighted by the court’s decision. On December 14, 2017, they hoisted red-and-white flags and banners expressing rejection toward the PLTU. Three days later, however, at midnight, police armed with long guns came to the village and detained three persons accused of hoisting the flag upside down. “The accusation against them did not make sense,” said Lasma.

She then accompanied the three residents in court. Lasma brought a witness who saw the three defendants hoisting the flag correctly. But the judge and prosecutor subjected the witness to intense questioning instead. They even told the witness of the criminal penalty of giving false remarks. “I felt like, why did they do that to the witness. The person was honest, but kept being dogged with questions,” she said. Seeing the injustice, Lasma went to tears.

A similar injustice was also felt by Mekarsari residents when the West Java State Administrative Court accepted the appeal from state electricity company PLN in April 2018. Later on, the decision was upheld by the Supreme Court. In December last year, the three Mekarsari residents received their sentences of between five to six months in prison.

NOT only in Mekarsari, Lasma and her friends also counseled the residents of Kanci Kulon village, Cirebon, West Java. They are demanding the cancellation of the Cirebon II PLTU project. Their situation is similar to that of Mekarsari’s. Prior to the Cirebon II PLTU construction, residents of Kanci Kulon had been feeling the impact from activities of the Cirebon I PLTU. Their income decreased because rebon (small shrimp) became harder to catch. Farmers also had increased difficulties producing quality salt.

The lawsuit from Lasma and friends failed in court, but she refuses to give up. Together with Walhi, Lasma routinely visits Mekarsari and Kunci Kulon villages every month. During the visits, they educate and counsel the people in their struggle against the PLTU construction.

West Java Walhi Executive Director Meiki W. Paendong said Lasma has a very important role. She is directly involved in compilation of lawsuits and is always present in court. This keeps the flame of hope alive in the hearts of the people. “She connects directly to the residents, giving instructions before trial and delivering legal education,” said Meiki.

West Java Walhi Advocacy and Campaign Manager Wahyudin Iwang said it is not easy to maintain the spirit of the people to continue resisting the PLTU. Sometimes, said Iwang, the spirit dries up along with defeat in court. Barrages of criminalization also pose a threat to the resistance.

Iwan said that Lasma and counsels of affected villages often hold discussions to keep their spirit alive. Lasma, Iwan continued, also gives education to women in Mekarsari and Kanci Kulon. Rodi, head of Jatayu who is also a resident of Mekarsari, said that the counsel from Lasma and her team allows the people to understand various environmental issues, including legal implications arising from problems in the environment.

The coronavirus pandemic narrows down the scope of struggle by Jatayu along with Walhi and the Bandung LBH. However, Jatayu still routinely holds a prayer and discussion every Thursday night. Lasma and her friends occasionally joined the discussion, even if only by phone. Rodi said their struggle still has a long way to go.

Rodi is thankful that Lasma and her team are always accompanying the residents of Mekarsari for the last five years. Despite losing and becoming victim, their spirit remains. “At least, there was a small victory that slowed down construction of the PLTU,” said Rodi.