A waliyah (a female wali or early preacher of Islam in Indonesia) can be found in the history of the spread of Islam on the Island of Bawean. Zainab, as was her name, continued the religious propagation duties of her husband, who had died while sailing from Java.

CONSTRUCTED from white bricks, the tombstone where Waliyah Zainab is buried appeared to be surrounded by a yellow curtain and covered with white fabric netting. It is in just past the front wall of the prayer area and separated from the main building of Diponggo Mosque in the Tambak subdistrict, Gresik, East Java, the grave of this propagator of Islam in Bawean in the 16th century is the most prominent. Three other grave sites in the complex only have wooden grave markers wrapped in white and cream cloth.

At the front wall of the mosque a floor stone where prayers had been performed is kept, which is believed to come from Zainab’s time. Other heirlooms, such as a ceramic plate, a large steel cup, a kris dagger, a broad-bladed knife, and a spear are kept in a room north of the grave.

Speaking by phone, Salim, Diponggo village head, described the current condition of the grave to Tempo in Surabaya, on May 8. Access to the crossover to Bawean, about 85 nautical miles north of Gresik and Lamongan, had been closed to prevent the spread of Covid-19. For the same reason, the caretaker of Diponggo Mosque and the village government had closed the grave site to visitors. Usually there are about 150-200 visitors there. “On Islamic holidays, it can reach 300-500 visitors,” said this caretaker of the Grave of the Waliyah Zainab, Ahmad Mubayyin.

Burhanuddin Asnawi in the book The Ulama of Bawean and the Archipelago’s Network of Knowledge in the 19th and 20th Centuries notes that Zainab was the first to spread Islam in Bawean. Some literature noted that Raden Maulana Makdum Ibrahim alias Sunan Bonang, the son of Sayid Ali Rahmatullah or Sunan Ampel, had gone to that island at the end of the 15th century. However, there is no strong evidence that Islam had been the religion of the indigenous people of Bawean Island during the time of the arrival of Sunan Bonang, who was also the first imam of the Demak Mosque in Central Java.

“It was not until the arrival of the propagators of Islam who came later in the 16th and 17th centuries, along with the arrival of Waliyah Zainab and Sayyid Maulana Umar Mas’ud, that Islam was widely welcomed by local residents,” wrote Burhanuddin.

Similar to the tales of the wali during the initial period of the spread of Islam in Indonesia, stories about Zainab also include their fair share of legends, myths, and folk tales. In one version of a legend in the book Folk Tales from Bawean written by Zulfa Usman, it is told that Zainab came from the Java mainland on a sentong or coconut flower petal and landed at Kumalasa Port. Villagers who had been hit by an epidemic drove Zainab away because they thought she had brought the disease. The woman then continued her journey until she arrived in Diponggo village on the north side of the island.

The minimal number of historical sources about Zainab have led to debate over the year of her birth, death and arrival in Bawean. M. Dhiyauddin Qushwandhi, author of Waliyah Zainab, the Princess Heir of Syeikh Siti Jenar, estimated that Waliyah Zainab was born between 1575 and 1585.

This is based on the year of birth of Zainab’s grandfather, Raden Nur Rakhmat alias Kanjeng Sunan Sendang, a wali who spread Islam and established the Sendang Duwur Mosque in Lamongan, East Java. Sunan Sendang was born in 1520 and died at the age of 65 in 1585.

Speaking to Tempo, Dhiyauddin said that Zainab was the daughter of Prince Geneng. This caretaker of the Luhur Islamic Boarding School in Sidoarjo, East Java, corrected other books which say that Zainab was the child of Prince Duwur, the younger brother of Prince Geneng. “The year of 1585 is determined as last possible year of birth of Zainab because that was the year that Sunan Sendang died,” said Dhiyauddin.

Dhiyauddin’s work published by the Waliyah Zainab Foundation in 2008. According to that book, the adult Zainab married a man known as Prince Sedo Laut. It is believed that this prince was a grandson of Raden Paku alias Sunan Giri I, the founder of the Giri Kedatuan or kingdom in Gresik. In the book, Zainab is also said to be of the fourth generation which continued the teachings of Syekh Siti Jenar alias Syekh Lemah Abang, founder of the Akmaliyah school of thought in the Indonesian archipelago. 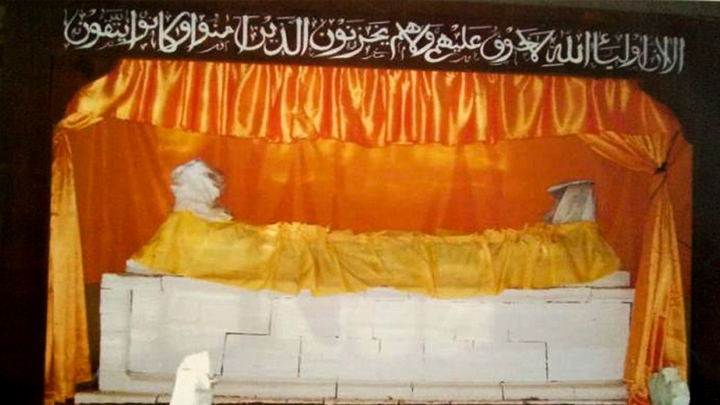 The grave of Waliyah Zainab in Bawean Island, East Java, May 8./Ali Masduqi

Dutch historian H.J. de Graaf in his book De Regering van Sultan Agung, Vorst van Mataram (1613-1645) en Die van Zijn Voorganger Panembahan Seda-Ing-Krapjak (1601-1613), wrote that the influence of the Giri Kedatuan in Islamic propagation grew during the era of Sunan Prapen. Denys Lombard, a French historian, in his book Nusa Jawa: Silang Budaya II, Jaringan Asia (Java Island: Cross Cultural II, Asian Network) also said that Giri remained autonomous and was able to continue Islamic propagation work during the ascendency of the Demak Kingdom in Central Java. “Especially in the direction of Kediri, which converted to Islam in 1579, and several trade offices outside of Java, on the coast of Kalimantan, and especially in the Maluku Islands.” Whereas, wrote Lombard, “Tuban formally recognized the pre-eminence of Demak in 1527 and Surabaya did the same in 1531.”

Dhiyauddin wrote that during a sea journey for an assignment to Bawean, the ship of Prince Sedo Laut sank. Only Zainab and Mbah Rambut, her handmaiden, survived. Zainab then took over her husband’s religious propagation work.

The hypothesis that Zainab only initially accompanied those propagation efforts is strengthened by Lombard’s analysis in his third book, Nusa Jawa: Silang Budaya, Warisan Kerajaan-kerajaan Konsentris (Java Island: Cross Cultural, the Legacy of Concentric Kingdoms). Along with the developments of sea ports and the spread of Islam, wrote Lombard, there was a tendency to limit the freedom of women and to monitor their movements. “From that point on, it could be said that they were sidelined from political life, where they had previously played a role.”

According to Jajat Burhanuddin, an instructor at the Syarif Hidayatullah State Islamic University in Jakarta, who has written a lot about the history of Islam in Indonesia, Zainab taking up the propagation work of her late husband was customary. The wife of a leader, said Jajat, must take over for her husband in his absence. “When events warranted it, she would step forward,” he said. “This was especially true if they were connected with the power elite. In our society, social recognition is important.”

The postulation that Zainab arrived during the height of the Giri kingdom is also supported by indications of the arrival of Syekh Umar Mas’ud to Bawean in the 17th century. At that time, according to the book Folk Tales from Bawean, Syekh Umar alias Prince Parigi came to Bawean and established an Islamic governance on the island in 1601. “For 30 years Syekh Maulana Umar Mas’ud was king on Bawean Island as well as a teacher of Islamic propagation.”

When Umar Mas’ud arrived in Bawean, some historical and anthropological records mention that Zainab’s influence had already taken root in Diponggo. One of them had to do with the use of language. The people in Diponggo spoke with a language that was heavily influenced by Javanese, not the language of Bawean, Madura, or a mix of the two, which were the languages of the developing majority on the island.

Jacob Vredenbergt in his article Bawean Migrations, in an academic journal published by the Dutch Kingdom, Bijdragen tot de Taal-, Land- en Volkenkunde, in 1964 wrote that the residents of Diponggo came from Java. Those vestiges are still found in various greetings. For instance, villagers use “rama” for their fathers, just like people do in Java. “The dialect of residents of Dipangga village is not easily understood by most of Bawean people due to having many elements of Javanese,” wrote Vredenbergt. “Their dialect appears to be mainly Javanese, mixed with Bawean and Indonesian.”

Another influence which shows traces of Waliyah Zainab is the puyahale. In its place of origin on Java, people better know this tradition as zikir mider or a group parading around the area and making supplications to God petitioning for safety for the entire village. “We reactivated this tradition just 10 years ago,” said Ali Masduqi, a resident of Diponggo who is also an administrator of the Waliyah Zainab Foundation.

Held every Islamic month of Muharram, this tradition is similar to the customs of the people who lived before the arrival of Islam. The participants, all men, go around the area in a procession carrying heirlooms from Zainab, such as a jug, spear, large steel cup, ceramic plate, entong, and a large coconut shell. At each village crossing, they make the call to prayer.

A similar tradition can be found in Sendang, Lamongan. This similarity, according to Dhiyauddin, is an indication that Zainab’s religious propagation work was more influenced by Sendang, which was more acculturated to pre-Islamic culture compared to Giri. This female wali did not leave any descendants. Her greatest legacy for Bawean is Islam.