The government decided to inject some Rp2.78 trillion to support the Indonesian Palm Oil Plantation Fund Management Agency in the swelling B30 program. It is seen as only benefiting oil palm oil giants that produce biodiesel.

LATELY, Eddy Abdurrahman has been meticulously following price developments of global crude oil and palm oil, also the exchange rates of the US dollar and rupiah. This former customs director-general has been anxiously following the fluctuation in these three indices since he has been appointed as Chief Executive Officer (CEO) of Indonesian Oil Palm Plantation Fund Management Agency (BPDPKS) on March 2. “I follow it from day-to-day,” Eddy said on Thursday, June 11.

Eddy was able to relax a bit when the crude oil prices started going up in the second week of June, which means that solar (diesel fuel) prices would follow suit. On the other hand, crude palm oil (CPO) prices have gone down slightly. The price gap between these two commodities, which had widened since earlier this year, started narrowing.

Diesel fuel and CPO prices are key to BPDPKS. As trade account deficit has sharply risen since 2018 following the global economic slowdown, the government has been pushing the mandatory program of using diesel fuel mixed with biodiesel. The goal was to lower oil imports. The gap in ingredients supply was filled by mixing biodiesel or fatty acid methyl esters (FAME), produced by advanced treatment of CPO. The government is also progressively increasing the concentration level of the mixture from biodiesel B20 to B30, starting January 1. This means that biodiesel on sale in Indonesia contains 70 percent diesel fuel and 30 percent FAME. Indonesia, the world’s largest producer of palm oil, has an abundance of raw material to produce this mixture of vegetable oil. The current problem is that solar prices has taken a nosedive along with the sharp global price decline of crude oil since the beginning of this year. Market demand went down further as the Covid-19 pandemic has forced global economy to its knees. The supply is so overflowing that oil producers’ tanks are unable to accommodate new production. This has even temporarily pushed the West Texas Intermediate oil prices for May contracts in the negative zone at minus US$37.63, the lowest it has ever been, in April.

Palm oil prices have actually also been corrected, but it did not go down as sharply as solar did. In the Rotterdam exchange, for example, the prices for CPO from Indonesia and Malaysia for June in European Union markets was corrected by US$5 to US$585 per metric ton. This condition has widened the price gap between diesel fuel and palm oil. In May, diesel fuel’s consumer price index (CPI) was only Rp3,083.14 a liter, while that of biodiesel was Rp8,494 a liter. The difference, excluding transport costs, reached Rp5,411 per liter. This is a jump from January, when biodiesel’s CPI was only some Rp2,000 more expensive. 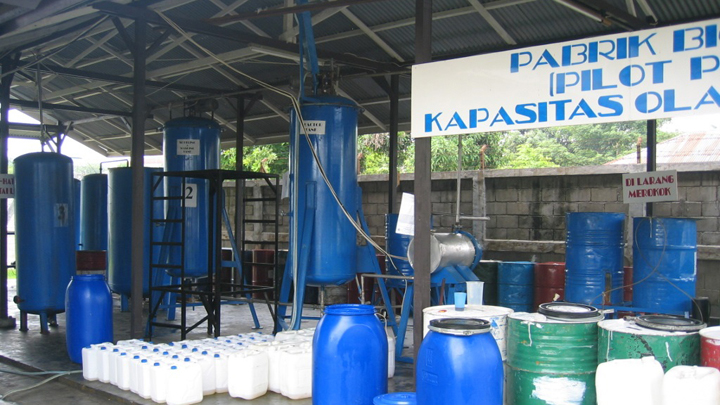 This sharp price difference has put the BPDPKS under tremendous pressure. Until now, if biodiesel CPI is higher than that of diesel fuel, the agency must pay the difference in the form of subsidies—dubbed incentive—to the industry producing biodiesel which are to supply the material needed by companies mixing B30, including state-owned Pertamina. The government constructed this scheme so that biodiesel retail prices in Pertamina gas stations remain cheap, and not differ much from regular diesel fuel.

The increase of vegetable oil concentration in B30 has automatically raised the demand for FAME supply, from 6.6 million kiloliters to 9.59 million kiloliters. Should biodiesel’s CPI continue to be higher, the burden on the BPDPKS would also become heavier. The agency’s coffers would not be able to cover the incentive costs of biodiesel.

Febrio Kacaribu, the finance ministry’s chief of fiscal policies, confirmed that the current conditions—with the widening gap between the CPI of non-fossil fuel and solar—lead to increased subsidies. “As it stands now, its financial position is not able to cover the incentives until the end of this year. The gap is quite large,” Febrio said on May 13. On June 3, the government decided to inject some Rp2.78 trillion into the BPDPKS. These funds would be included in the 2020 state budget revision and details, which the government is preparing for the national economic recovery amidst the Covid-19 pandemic. This will also be the first time that the state budget is forced to hand out funds to the BPDPKS, which until now had been able to operate from CPO export levies of some Rp14 trillion annually.

DISCUSSION on BPDPKS’ potential deficit under the burden of the B30 program has been ongoing intensively for over a month starting in late April. To the steering committee led by the coordinating minister for the economy, the BPDPKS proposed a number of options to tackle the problem.

Eddy Abdurrahman said that he suggested a cap to limit the subsidy BPDPKS has to pay up. For example, Eddy continued, a maximum of Rp3,500 per liter. This would mean that another party would have to bear the remaining gap between the biodiesel and solar CPI above that maximum amount. “And who would that be? FAME businesses or Pertamina? This is the problem,” he said.

This option has been mentioned to biodiesel producers and Pertamina. “As soon as the companies heard that FAME producers had to bear the burden because Pertamina is unable to do so, they immediately gave up,” Eddy said. He further said that biodiesel companies said they would rather halt production because the proposed scheme was not included in their business calculations.

Thus, that plan fell apart. At that time, there had been no plans to use state funds. In discussions, calculations assumed that all subsidies would be BPDPKS’ responsibility, as it had been until now. “That’s why I kept doing the math as the references kept shifting,” Eddy explained. The energy and mineral resources ministry continues to monitor the movement of Mean of Platts Singapore (MOPS) prices, on which solar prices are based. In June, the energy ministry’s directorate-general of oil and gas set a MOPS price at US$29 per barrel. Based on that, Solar’s CPI took a nosedive to Rp2,801 per liter.

Fortunately, around the same time, the energy ministry’s directorate-general for new and renewable energy and conservation had stipulated biodiesel’s CPI to go down to Rp6,941 per liter. This decrease occurred after the ministry cut palm oil production cost to 20 percent FAME. Conversion costs in biodiesel factories went down to US$80 from US$100 per metric ton. This policy was implemented so that the B30 blend mandate would fit into the subsidy scheme.

However, this did not solve everything. The finance ministry calculated that, even with an average gap of only Rp3,732 per liter between biodiesel and solar prices, the BPDPKS would still suffer a deficit of Rp3,54 trillion. These numbers could potentially rise further if solar prices continue to fall or, conversely, CPO prices climb up. Moreover, the BPDPKS must also use some of its funds for other programs, including renewing people’s oil palm plantations, research, and marketing. As it remained unclear who would be responsible for the gap created by procurement of B30, the state finally stepped in. In a coordinating meeting at the coordinating ministry for the economy on May 29, it was decided that the government would cover some of BPDPKS’ deficit. The plan is that Rp2.78 trillion will be transferred from the state budget. “This is the last solution, based on a decision taken by the steering committee,” Eddy said. The remaining deficit, some Rp760 billion, will be jointly borne by businesses through an increase in CPO export tariffs by US$5 per ton to US$55 per ton.

The government has also lowered its target of FAME volume in the biosolar program by 18 percent, from 9.59 million kiloliters to 7.83 million kiloliters. The Covid-19 pandemic is expected to suppress industrial and public fuel consumption.

With scenarios ranging from fund injection from the state budget, lowering the conversion costs or biodiesel production from CPO, increasing export levies, until lowering the FAME quota, Eddy is optimistic that the B30 program could safely continue until the end of 2020. He expressed hope that conditions would improve and that global oil prices will rise again. “The energy ministry is confident that oil prices will recover. Moreover, the US is already making a lot of noise (about that),” he said. Looking ahead, the government may decide to extend the B30 program into 2021 because of uncertain economic conditions. The government had aimed for a B40 program—biodiesel with 40 percent FAME level—to be implemented by July 2021. “Nevertheless, research into B40 will continue,” Eddy said.

IMMEDIATE criticism met the government’s decision to channel state budget money into the BPDPKS. The Indonesian Oil Palm Farmers Organization (POPSI) asked that the government cancel this plan, which the organization believes to be nothing more than added subsidies for the biodiesel industry. In their online press conference on Friday, June 5, they deem that this policy would only benefit palm oil corporations owned by the big conglomerates with wealth up to 60 percent of the total state budget.

Mansuetus Darto, chairman of the Oil Palm Workers’ Union, said that state funds should be channeled into direct subsidies for oil palm farmers that are currently burdened by the rising price of farming material such as fertilizer. Also, the government policy to increase CPO export levies have put fresh fruit bunch (FFB) prices under pressure. He pointed out that funds managed by the BPDPKS have always been enjoyed more by the biodiesel industry. Only a small portion of its money have flowed towards farmers through the individually owned plantations’ renewable program.

Indonesia’s Sustainable Oil Palm Farmers Network has asked the government to involve farmers in the management of biodiesel program by including them in the biodiesel raw material supply chain. The government should facilitate downstream industry development in the form of biodiesel factories for farmers. Until now, raw material for the B30 program has mostly been supplied by corporate plantations and its affiliated businesses. 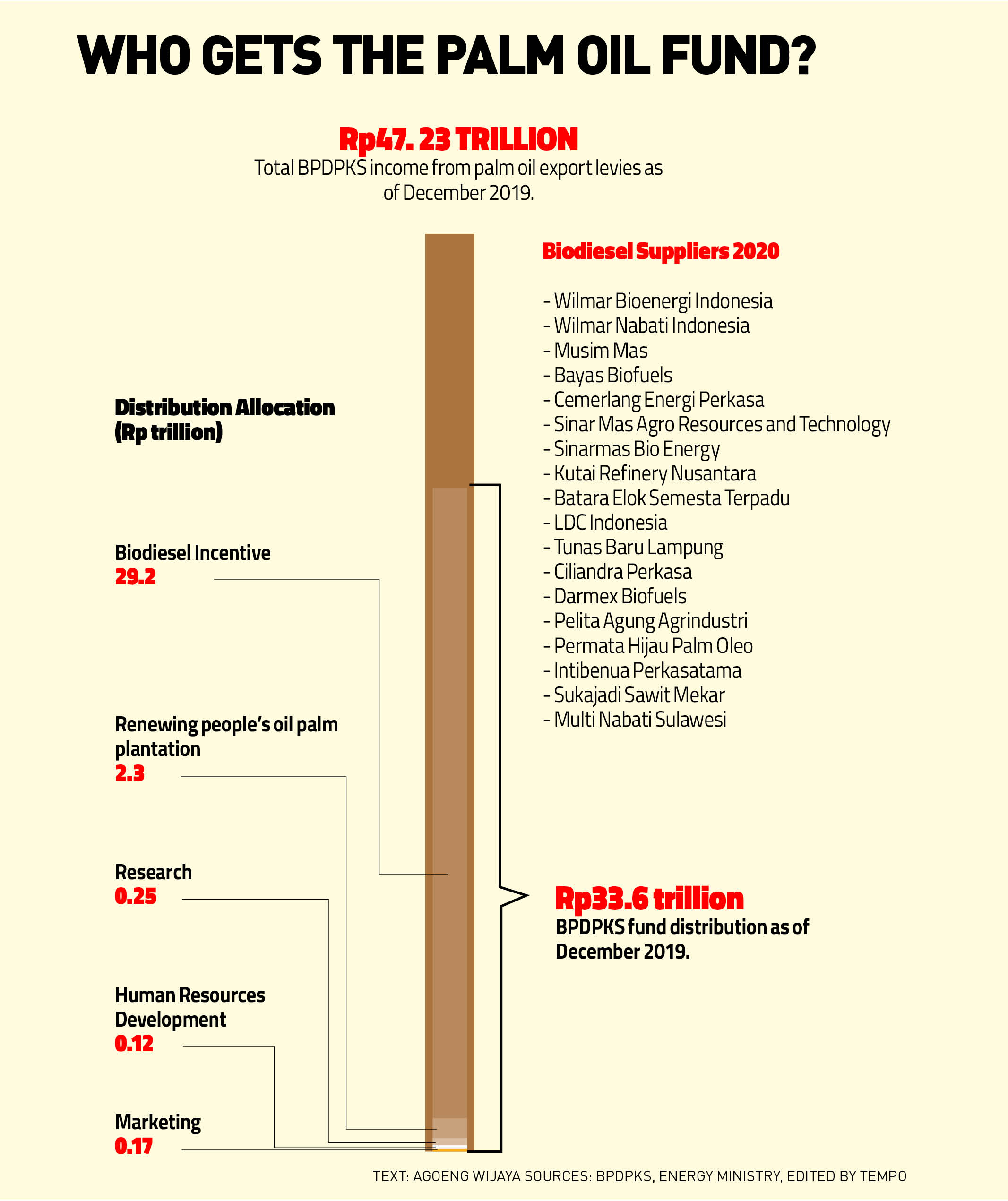 POPSI Advisory Board Chairman Gamal Nasir urged that the government’s plans for B30 until B100 programs would be paired with assurance that the biodiesel industry would absorb FFB from people’s plantations. “The energy ministry need to create the regulation for that,” said Gamal, who was the former plantation director-general at the agriculture ministry.

Meanwhile, the budget for B30 program subsidy will mostly come from export levies, Eddy said. The BPDPKS will also use internal funds from the surplus balance of last year, which amounts to Rp12 trillion.

Farmers, he said, will benefit from an increase in palm oil prices. The biodiesel program will lead to higher demand of palm oil, which would lead to more stable prices. “Imagine if the biodiesel program did not exist, how much production would not be absorbed? The price would have surely fallen.”

However, research done by University of Indonesia’s Research Institute for Economics and Society titled Risk Analysis for the Biodiesel B30 Policy published in February showed that facts in the field are quite different. Palm oil’s complex supply chain obstructs price transmission to farmers. Although the government sets FFB buying prices in each region, the reality is that many farmers are still faced with prices far below that standard. The research said that in addition to potentially burden the state budget, there is another risk: “An increase in vegetable oil demand causes environmental degradation.”