Bird catchers are using rat glue and birdsong recording to get their prey. They often encounter dangerous animals during their hunt.

A Yelllow-vented bulbul (Pycnonotus goiavier) the size of an adult’s thumb frantically moved its wings in a futile attempt to fly. Both its feet were stuck on a branch in a bush somewhere in the Konak conservation forest, Jalan Lintas (free way) Taba Penanjung, Kepahiang Regency, Bengkulu. It was Friday, July 3, and the bird had landed on the branch that was smeared with rat glue.

Watching from around 20 meters away, the person who made the glue trap, 43-year-old Afrizal, approached the green and light brown feathered bird. He caught the bird and released its toes from the glue. After examining the bird for a while, Afrizal then tossed the bird into the air, setting it free. “It is a female, better for her to just lay eggs,” he said to Tempo who had been following him. “Besides, the price is too low if I sold it.”

Afrizal, a resident of the City of Bengkulu, had been hunting songbirds the whole afternoon. He is among the senior pemikat—the term used to refer to bird catchers—in Bengkulu. A tattoo of a peacock is drawn on the right arm of this man, who had spent decades hunting for birds. However, despite his experiences, Afrizal came home empty handed that day. The birds were reluctant to come out due to the steady drizzle that had been falling around the forest all day.

That was why he appeared rather gloomy that evening. Afrizal said that he catches birds to make a living for his family. The job, he said, only provides enough income to cover their daily needs. “We will not be able to go to the haj pilgrimage,” he said. Afrizal lives with his wife and three children in a small, rented house in Bengkulu City. He often works odd jobs when not catching birds.

Afrizal had had his heyday as bird catcher a few years ago. Back then, he could catch dozens of birds in a day. Aside from yelllow-vented bulbul, he usually catches purple-throated sunbird (Leptocoma spreata), Javan white-eye, (Zosterops flavus), and various other birds. He sold these male birds to collectors for Rp4,000 to Rp6,000 each. When lucky, he could bring home up to Rp200,000, at least three times in a week. 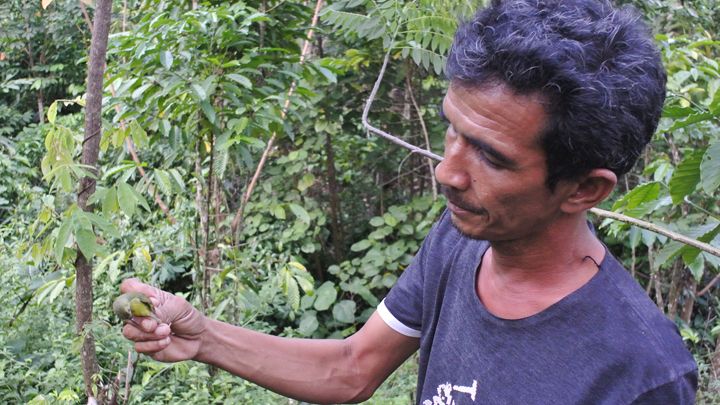 Today, Afrizal’s income is just half of what it used to be. Songbirds are now nesting deeper inside the forest. Their numbers have also dwindled. Two years ago, he could catch them in the outskirts of the jungle. Now he has to walk through the conservation forest for two hours in order to find the birds’ habitat.

Agung, a bird catcher in Dharmasraya Regency, West Sumatra, is experiencing a similar situation. Despite his hunting ground being located near the Bukit Tiga Puluh National Park forest, he has been having more difficulty finding birds in the area, at least for the past year. “White-eyes used to be common in bushes, but now it is hard to find them,” he said on September 3.

The situation is made worse by rampant illegal logging around the forest. The trees where the birds nest are felled, and the roar of the loggers’ chainsaws, said Agung, scares the birds away. Bird catchers are afraid of going into the forest because dangerous animals like bears and tigers are often seen wandering down from mountains because of the logging activities.

Agung said that he often encounters large snakes in the trees when trying to attract birds. “Catching bird these days means putting one’s life at stake,” he said. Agung would often keep the catch for himself, because he does not want to sell them off after going through such great effort to get the birds.

Aside from glue, sometimes Agung also snares the birds using a net tied to the treetops. He uses birdsong recording played from a cell phone near the trap to lure them in. This is a substitution of the old method of placing a live bird near the trap to get other birds to approach.

Nabila Fatma, communications director of Flight: Protecting Indonesia’s Birds, said that massive catching and smuggling of birds to Java Island have contributed to the decline of songbirds population around the jungles of Sumatra. On average, around 3,250 birds are caught from the forest every day. Flight estimates that Sumatra’s songbirds population has been reduced by more than 1 million in the past year due to illegal catching.

Though acknowledging this phenomenon, Afrizal remains hunting for birds because the demand is still high. He occasionally hunts protected birds for their higher price. The crested jay (Platylophus galericulatus) for example, sells for Rp400,000. In the hands of traders, the bird may fetch more than twice that amount. Afrizal is aware that the crested jay is a protected animal. If caught hunting for the bird, he could be facing up to five years in prison and Rp100 million of fine. “But I have to feed my family,” he said.

Hunting for the crested jay or the blue-winged leafbird (Chloropsis cochinchinensis) requires even more effort. Afrizal would have to spend a night in the middle of the forest because the birds live on the other side of a heavily vegetated hill. The crested jay’s protected status, he said, makes the bird more sought after and therefore more expensive.

However, high price does little to improve the bird catcher’s life. Nabila Fatma said that the catchers—whose numbers are estimated to be dozens spread all across Sumatra—are living from hand to mouth because they sit on the bottom of the songbird catching and smuggling chain. “The lion’s share of the profits goes to collectors and traders,” she said.

Nur once went into trouble with the Bandar Lampung Natural Resource and Conversation Office (BKSDA), for being accused of smuggling songbirds to Java. The trader’s allegedly illegal birds were confiscated. Nur, who owns several vehicles, sold a car to a collector in an area in Sumatra to cover losses from the confiscation. He was not discouraged by the incident, though. “I am an official and registered merchant who has to start over,” said the trader.

Bird catchers like Afrizal are not envious towards collector’s apparent welfare. In order to become a songbirds collector or trader, he said, one must have large capital. Afrizal thinks he could not become a trader because he lacks a network of buyers, either in Bengkulu or Java. So far, he could only ‘promote’ himself to be a coordinator of bird catchers. “When an order comes, I could assign other bird catchers,” he said. His income remains small because he has to share it with other catchers. Only, he no longer needs to get in and out of the forest as often as before.