Industrial pollution at Bengawan Solo River has reached an alarming point. Of the 85 companies that dump waste into the longest river in Java, only 18 have disposal permits. Firms with permits also still dispose of waste above the allowed standard.

SITTING on the dirt floor, Giyem kept scratching her legs. From the knees down, the 60-year-old woman’s legs are blackened and dotted with blisters from skin irritation. She said it started about one year ago after she began washing her feet at Gupit River near her house in Gupit village, Sukoharjo, Central Java. “Since then, my legs have become very itchy. I was scratching and still itching, until it bled. Some of our neighbors experienced the same thing,” she said, last March.

Giyem’s feet-washing spot is just several meters from the waste disposal pipe of Rayon Utama Makmur. The rayon fiber factory builds a sewage pipeline with a 50-centimeter diameter that stretches three kilometers along the Gupit River, until it empties into the Bengawan Solo River. The poor quality of materials and joints caused the pipes to leak frequently, spilling waste to Gupit River, where Giyem has been washing her legs for the past year.

Currently, the river’s conditions are not much different from a year ago. While walking along Gupit River last May, journalist Zakki Amali who writes the report for Tempo discovered a number of leaks in the sewage pipe belonging to Rayon Utama Makmur. Behind the factory, there was also a sewer that flowed into Gupit River. The water in those two locations looked thick, smelling foul. “We’ve been suffering since 2017,” said Tomo (39), a community leader at Pengkol village, which is also passed by Gupit River.

Residents have repeatedly asked Rayon Utama Makmur to stop waste disposal. The factory responded by repairing the leaky pipes many times. But the leaks still exist.

The condition is even worse in Ngepos hamlet, Nambangan village, Wonogiri—a neighboring regency of Sukoharjo. There, the sewage pipe for the Rayon Utama Makmur empties at the edge of Bengawan Solo. The river water is blackish and rotten stench could be smelled from 10 meters away.

The water of the residents’ wells that are located within a 500-meter radius from the end of the sewage pipe cannot be consumed, as it has foul color and odor. “Our wells’ water used to be clear and fresh. Now we cannot drink it,” said Siti Kosaimah (52) from Ngepos. To get drinkable water, residents are forced to buy bottled water and build a groundwater treatment system with the help of the village 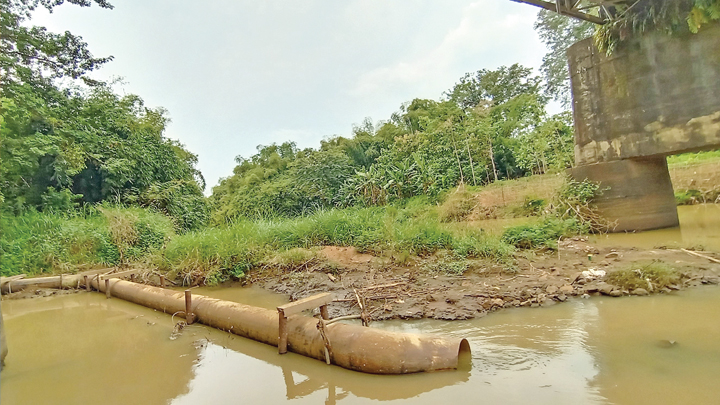 In mid-May, Tempo took samples of waste water from where the leaky pipe was located. A test was held at the Muhammadiyah University of Surakarta’s Chemical Engineering Laboratory, and the result showed that the water sulfide content was 1.0, higher than the quality standard limit of 0.3. The level of biological oxygen demand (BOD) reached 958.8 or several times higher than the standard quality limit of 150.

This high sulfide content appears to be what caused Giyem’s feet to itch and blister. Sulfides are corrosive and cause irritation to the skin. Meanwhile, the high levels of BOD cause the water to smell bad and can kill fish in rivers.

Rayon Utama Makmur’s Corporate Secretary Arief Bintoro Debyoseputro denied that his company is polluting the environment. “Everything is in accordance with standards and provisions of the environment and forestry ministry,” he said on August 31. Regarding the leaked sewage pipe in Gupit River, Bintoro said that it was not a waste pipe, but a clean water pipe leading to the factory. However, findings in the field indicate that the leaky pipe was emitting dirty, bad-smelling water.

Not just Gupit River, pollution also occurred in the tributaries of the Bengawan Solo River in Sukoharjo. For example Langsur River, where dozens of large and small industries dump their wastes into the river. One of them is Sri Rejeki Isman or Sritex. The textile giant has one drain for a sewer behind the factory. Dark brown, foul smelling water flowed from the ditch in May.

Residents near Langsur River have been protesting about the waste disposal for 20 years. Protests from residents of 13 villages come and go. Each time there was a protest, Sritex paid the residents off with compensation funds. “They gave Rp200 million to people who wanted the disposal stopped. Part of the money was used to build a village bridge,” said Marjono Setio Budi (49), a resident of Langsur village.

In 2009, the residents living near Langsur River protested again. The action ended after Sritex gave them compensation money. According to one resident who wished to remain anonymous because his family worked in the factory, Sritex gave assistance to build a clean water system and provided chainsaws to the residents. “After that, there were no more protests even though the company was still disposing waste,” he said. “We are actually ashamed to accept it. But, what else can we do, there is never a solution. “

Agus Setiady from Sritex waste water management’s technical team, said that the factory waste has been processed according to government standards. “We have a liquid waste disposal permit. We also carry out waste level measurements regularly, with help from a third party appointed by the environment ministry. The results are in accordance with standards,” he said on July 29.

Sritex’s Human Resources Development Manager, Sri Saptono Basuki, questioned the sampling at the mouth of the discharge pipe in the river. “Sampling in the river cannot be stated as a pure sample. That means maybe there are many external components that can give different results when compared to the waste that is taken directly,” he said. When Tempo asked to take samples directly from the waste treatment site, Sritex refused to give a permission for it.

Another textile company in Sukoharjo that dumps waste into Bengawan Solo is Tyfountex. The factory, located in Kartasura subdistrict, discharges waste to a drain that flows directly to Bengawan Solo. The aqueduct is located just behind the factory, covered in bushes. According to the sample test results, the BOD parameter of the waste reached 53.57, and the sulfide content was 0.6. These numbers exceed the quality standard. As of the time this article was written, Tyfountex has not provided any information. Interview request letters sent to the office and via company e-mail were not responded to.

THICK brown water poured heavily from a sewage drain in Sroyo River at Kemiri village, Karanganyar Regency, Central Java, in mid-May. The pipe, about 50 centimeters in diameter, came from the factory of Indo Acidatama, a chemical producer. The waste disposal is located in rice paddies, a few kilometers from residential areas.

The Sroyo River is one of Bengawan Solo River’s tributaries in Karanganyar—also a neighboring regency of Sukoharjo. Each year, the river came under public attention for its high pollutants. Every dry season, the water color turns blackish brown. According to local residents, Indo Acidatama and Sari Warna Asli Textile Industry Unit 1 are factories that dump large amounts of waste into the Sroyo River.

Some 500 meters from Indo Acidatama disposal site, still in the same river, there is a sewage drain belonging to Sari Warna Asli Textile Industry Unit 1. The water coming out of the sewage pipe is cloudy and foamy. Sample test results showed a BOD level of 160, while sulfide levels were 1.2. Both exceed the quality standard.

At the time this article was written, Sari Warna Asli Textile Industry Unit 1 has not provided an explanation. Meanwhile, Indo Acidatama Corporate Secretary Benny Herman said the factory is not polluting the river. He claimed that Indo Acidatama’s waste has been tested and the results complied quality standards. “We are properly green. There is no problem with our waste,” Benny said on August 4. 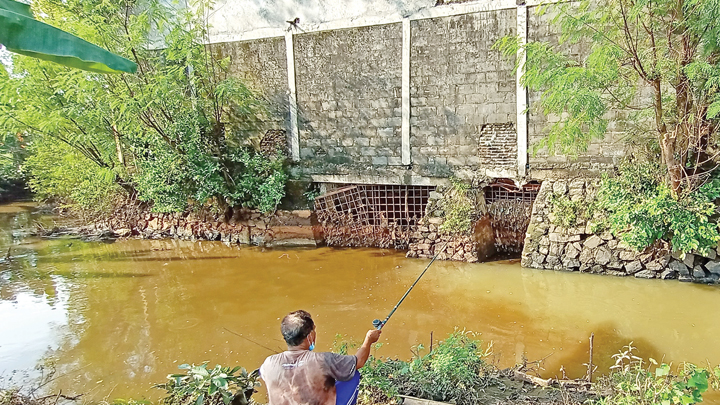 Two days later, on August 6, Central Java Governor Ganjar Pranowo visited the location of Indo Acidatama’s sewage pipe, the exact spot where Tempo took waste samples. According to Ganjar, the sewage pipe there was an unlicensed one. Ganjar then went to Indo Acidatama’s factory cite and asked the manager to improve its waste treatment.

In 2013, the river’s status was categorized as heavily polluted, but the government has not taken firm action against industries that pollute the environment. In the case of Rayon Utama Makmur, the company only had a wastewater treatment plant in 2018 and got a liquid waste disposal permit in 2019. Whereas the company has been operating and dumping waste into rivers since 2017.

Sigit, head of environmental monitoring at the Sukoharjo environmental office, argued that his agency could not prohibit Rayon Utama Makmur from disposing waste because it was on trial. “Previously, the term was trial,” Sigit said at his office in June. Sigit’s statement contrasted that of the Environment and Forestry Minister Regulation No. 22/2018, which states that only industries with liquid waste disposal permit can dispose of waste into rivers.

IN December last year, the Central Java provincial government held a coordination meeting for the treatment of Bengawan Solo’s waste. At the time, Governor Ganjar Pranowo gathered dozens of industry representatives. The meeting—attended by staff members of the environment and forestry ministry, the coordinating ministry for maritime affairs and investment, and representatives of the East Java provincial government—recommended that all industries located on the banks of Bengawan Solo improve their waste management.

According to Ganjar, a number of industries admitted to polluting for various reasons, from limited equipment to lack of resources. Ganjar finally gave the factories the opportunity to correct their mistakes by the end of this year. “If after a year they still commit violations, we will punish them in accordance with the law. We will take them to court,” he said on July 16.

Luckmi Purwandari, director of water pollution control at the environment ministry, said that Bengawan Solo has currently exceeded the river regime coefficient or the critical watershed parameter. The value of Bengawan Solo’s river regime coefficient is 541, far higher than the fair standard of 40-80. “Pollution increases during the dry season because the water discharge decreases while the volume of waste discharged into the river remains constant,” she said.

According to the environment ministry’s records, in Central Java there are 85 industries that dispose their waste to Bengawan Solo. Of that number, only 18 have liquid waste disposal permits. In fact, Luckmi said, industries with permits still sometimes dispose waste that exceeds the quality standard. One of them is Rayon Utama Makmur.

“For RUM (Rayon Utama Makmur), we have provided guidance many times. We once brought in an expert so that the waste water does not smell. But we can’t force them,” she said. “In addition, in a coordination meeting in December last year, it was agreed that the government prioritizes persuasion and guidance approaches.”