At least 60 regional candidate-heads are corona-positive. The government and DPR are adamant about forging on with local elections.

CHAIRMAN of the Sidoarjo General Election Commission (KPU) in East Java, Mukhamad Iskak, had no qualms receiving running mates Kelana Aprilianto and Dwi Astutik on Friday, September 4. The candidate pair supported by the Indonesian Democratic Party of Struggle (PDI-P) and the National Mandate Party (PAN) came accompanied by hundreds of their followers.

But upon scanning the application form the pair submitted, the verification team noted Dwi was corona-positive. The KPU has made it a requirement that candidate application forms be attached with results of Covid-19 swab tests. A candidate pair may directly register their candidacy once their swab tests show negative results. Iskak told Dwi to go directly home. “The application form will be officially verified once we know the results of their medical check up,” said Iskak when contacted on Thursday, September 24.

This is not the first time Rajiun had gathered crowds around him. On August 9, a crowd of thousands gathered at the Nusantara Harbor, Muna, to pick up Rajiun and his running mate, La Pili, who had just pocketed their recommendations from the United Development Party (PPP), Democrat Party, and National Democrat (NasDem) Party “The improper behaviour of these running mates ended up being detrimental to themselves and for other people,” said Director-General of Regional Autonomy of the Ministry of Home Affairs Akmal Malik, who signed a reprimand letter five days later, addressed to Rajiun.

In Berau Regency, East Kalimantan, incumbent regent, Muharram, was buried using Covid-19 procedure on Tuesday, September 22. Before, the politician from the Justice and Prosperity Party (PKS) had accompanied Minister of Maritime and Fisheries Edhy Prabowo—who has also been declared corona-positive—on his visit to Berau on September 1.

Muharram and his running mate, Gamalis, put in their registration forms with the KPU on September 6 accompanied by hundreds of closely-packed followers, some of whom were not wearing face masks. Three days later, Muharram was confirmed corona-positive. “He should not have created a parade of followers if he was already feeling unwell,” said PKS Deputy Secretary-General Mardani Ali Sera.

Several institutions, including the Nahdlatul Ulama, Muhammadiyah, and the National Commission on Human Rights (Komnas HAM), have urged the government to postpone the simultaneous regional heads election slated for December 9, to avoid further contagion spread. “The pandemic has not yet been contained, giving the elections postponement a very strong judicial base,” said Komnas HAM Commissioner Hairansyah.

But the House of Representatives’ (DPR) Government Commission, together with the home affairs ministry, the KPU, and the General Elections Supervisory Agency, in a meeting on September 21, decided the regional elections should go ahead. Member of the Government Commission from the PKS Faction, Mardani Ali Sera, said his faction asked the government to allow for a postponement option if the pandemic continues unrestrained. Mardani also requested President Joko Widodo to take full responsibility for the execution of the regional elections, since it requires tight disciplinary measures involving the Indonesian Military (TNI)  and the National Police.

Gerindra Party is on the side of going ahead with regional elections. DPR Government Commission member from the Gerindra Faction, Sodik Mudjahid, assessed that the end of the pandemic still cannot be predicted, making it imperative for the elections to go on. “Regional elections have to continue with tight observance of Covid-19 protocol,” he said. PDI-P Secretary-General Hasto Kristiyanto said, postponement of the elections would only create further uncertainty and can trigger political risks. 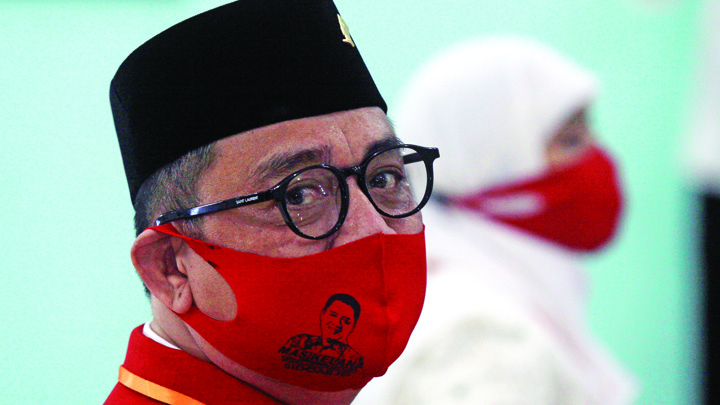 On the morning of the meeting, President Jokowi called in Coordinating Minister for Politics, Law and Security, Mahfud Md., Minister of Home Affairs Tito Karnavian, and TNI Commander Marshall Hadi Tjahjanto to the Bogor Palace. Also present was Police Chief Gen. Idham Azis, Chief of the State Intelligence Body (BIN) Budi Gunawan, and Chairman of the National Disaster Mitigation Agency Doni Monardo. The meeting discussed the regional elections. After that, Presidential spokesman, Fadjroel Rachman, said Jokowi reiterated that the local elections could not wait for the pandemic to end. “Not a single nation can predict when the contagion will end,” said Fadjroel.

Until September 26, Mahfud had made no response to questions submitted by Tempo. BIN Deputy of Communication and Information Wawan Purwanto confirmed the information that the President held a meeting attended by BIN chief regarding the regional elections schedule. “Decisions on the elections must be taken to avoid uncertainty,” he said.

On September 22, the government gathered the secretaries-general of political parties in a virtual meeting to disseminate information regarding tight health protocols during the regional elections. NasDem Secretary-General Johnny G. Plate said, his party agreed to the elections going ahead under tight health protocols. Raja Juli Antoni, secreatry-general of the Indonesian Solidarity Party (PSI), who was also in attendance, said Mahfud and Tito announced the decision made in the meeting with the DPR the day before.

Ad interim KPU Chair, Ilham Saputra—KPU chair Arief Budiman and member Pramono Ubaid are both corona-positive—claimed his institution was ready to execute the regional elections in the middle of the pandemic. The KPU has revised several regulations to comply with Covid-19 protocols, for instance restrictions regarding meetings in closed rooms, and a ban on concerts for campaign purposes. “Procedures and simulations have been carried out to comply with health protocols for the duration of the election processes,” he said.