A latest study predicts that a magnitude 9.1 earth quake and 20 meters high tsunami could hit the southern coast of Java. It further underlines the imperativeness for additional tsunami early warning system instruments.

NEWS about a potential megathrust or massive earthquake that could trigger 20 meters tall tsunami waves along the southern coast of Java island struck fear into Ellyn’s heart. Although the information is not entirely new, Ellyn, a resident of Pangandaran Beach, West Java, remains concerned. “I hope we will all be saved from any danger,” she wrote on social media. Another netizen who goes by the name Fitri chose not to pass the information to her parents because of a past experience. “When the earthquake hit, they were very panicked,” she said.

The big earthquake once again became a hot topic of discussion after a team of researchers released their latest findings related to the potential earthquake and tsunami along the southern coast of Java. The numbers are indeed shocking: a magnitude 9.1 earthquake accompanied by 20 meters tall tsunami in Banten and West Java, and 12 meters tall in Central Java and East Java. As a comparison, the 2004 Aceh disaster recorded a magnitude 9.3 earthquake and tsunami height of between 15 to 30 meters. More than 170,000 people perished at the time.

Due to public unrest triggered by the information, the Meteorology, Climatology, and Geophysics Agency (BMKG) decided to intervene. BMKG Tsunami and Earthquake Mitigation Chief Daryono said that there is no current technology capable of predicting when, where, and how big an earthquake will occur. “We hope that the public will continue improving its literacy and not so easily surprised whenever news about a potential disaster emerges,” he said in Jakarta on September 27.

Public excitement over the issue was triggered by publication of a latest seismic research by a team from the Bandung Institute of Technology (ITB) in Nature science journal. Their report, titled Implications for megathrust earthquakes and tsunamis from seismic gaps south of Java Indonesia, was published on September 17. It highlights a potential earthquake from the seismic gap zone to the south of Java. Seismic gap is a section of an active fault that has experienced little or no seismic activity for a very long period of time.

Potential for earthquake and tsunami along the Java fault is actually not new information. Eko Yulianto, a paleotsunami researcher from the Indonesian Institute of Sciences Geotechnology Research Center, said that a geophysical expert from the United States, Robert McCaffrey, had previously written in his 2008 publication that the 1,800 kilometers long subduction zone in the south of Java (stretching from the Sunda Strait to Nusa Tenggara), could potentially trigger a magnitude 9.6 earthquake during simultaneous rupture, and it will occur every 675 years.

Sri Widiyantoro, head of the ITB research team, said the novelty of their study is that it adopted seismology and geodesy approaches, particularly global positioning system (GPS) method combined with tsunami modeling. “This is a multi-disciplinary research,” said Widiyantoro, a seismologist from the Global Geophysics Expertise Group, Faculty of Mining and Petroleum Engineering, ITB, on September 24.

Widiyantoro said his team utilized the latest data on earthquake central location and depth in the BMKG catalogue from April 2009 to November 2018. For comparison purposes, the team referred to data from the International Seismological Centre in 1964. “The data also show that seismic gap is present, so they are consistent,” said Widiyantoro, who led a team of 10 researchers from ITB; National Disaster Mitigation Agency (BNPB), National Earthquake Studies Center; Geospatial Information Agency (BIG); Bandung BMKG; University of Cambridge, the United Kingdom; University of Bergen, Norway; and Kyoto University, Japan.

Following explanation on the map, the quiet zone is depicted stretching along the Java and Bali Islands, situated between the Java (Sunda) Trench and the southern coast of Java. The team divided the seismic gap zone into the western segment from Banten to West Java and the eastern segment from Central Java, East Java, to Bali. Their findings are further supported by GPS data from 37 stations owned by BIG, the agriculture ministry, and the agrarian and spatial planning ministry/National Land Agency. 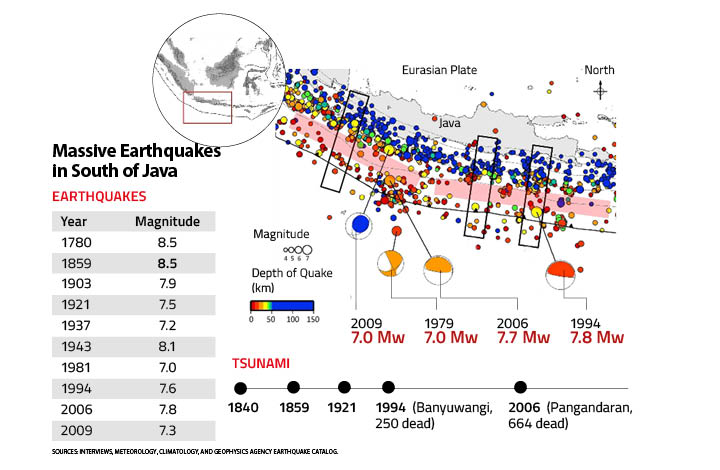 Massive Earthquakes in South of Java/Tempo

The GPS data modeling was done by team members from the ITB Global Geophysics Research Group. “It resulted in a slip deficit or locked zone being discovered within the seismic gap,” said Widiyantoro. In their analysis, the team created the fault plane with the length of 660 kilometers and width of 210 kilometers. If the deformation or change to the rate of motion velocity as observed through GPS is smaller than the speed of movement of the tectonic plate, then the area could potentially trigger a future earthquake.

To predict tsunami potential along the southern coast of Java island, the team carried out tsunami modeling under three scenarios, involving the segments in western Java, eastern Java, and the combined western and eastern Java segments. In a worst-case scenario where both segments rupture at the same time, the tsunami wave near the small islands to the south of Banten may reach as high as 20.2 meters, and 11.7 meters in East Java.

The story of this massive earthquake in the southern part of Java is not a myth. Since the 1700s, there has been at least 11 earthquakes varying between 7.0 to 8.5 in magnitude. “An earthquake of 9.0 or higher in magnitude in southern Java has never been recorded in the earthquake history catalog,” said Widiyantoro. BMKG’s catalog mentions that the area experienced tsunami in 1840, 1859, 1921, 1994, and 2006. The Dutch colonial government recorded that the 1840 and 1859 tsunami in Pacitan, East Java, as well as the 1921 tsunami in Cilacap, Central Java, inflicted no casualty.

Eko Yulianto added that the earthquake and tsunami prediction in the said research is based on certain assumptions or logic. One of these assumptions is that the seismic gap would indeed rupture and generate earthquake. The last massive earthquake occurred 400 years ago and there has not been another one since then. Also, the rate of energy accumulation during those 400 years is assumed to be similar to the measurement obtained through the GPS. “If one of those assumptions was wrong, then the 20 meters number (of the tsunami) would be invalidated,” he said.

Abdul Muhari, a research team member who is also the acting BNPB director of risk mapping and evaluation, said that this latest research is important to increase the public’s readiness in the event of disaster. “In case of a 10 to 12-meter tsunami, how far should people run to reach safety in less than 20 minutes—the time that it takes for tsunami to arrive after the earthquake hits,” he he said. Widiyantoro added that results from the research further underline the imperativeness of improving the few tsunami early warning system on the southern region of Java.