Prabowo Subianto went on a safari to several countries, seeking to purchase aircraft. He proposed more than Rp260 trillion worth of foreign loans.

AFTER more than two weeks, the mystery on the meeting between the Minister of Defense Prabowo Subianto and his United States counterpart, Defense Secretary Mark T. Esper, was answered. Muhammad Lutfi, ambassador of the Republic of Indonesia to the United States of America, said that among the topics discussed on the October 16 meeting was the plan to purchase the F-35 fighter jet.

During a press conference on Monday, November 2, Lutfi revealed that Indonesia is unable to buy the Lockheed Martin 5th-generation fighter jets yet. “There is a platform that we must work on to get the 5th generation, such as obtaining the 4th and 4.5th generations,” Lutfi said.

The former minister of trade estimates it would take about nine years for Indonesia to bring home the F-35. Unlike Lutfi, the US Department of Defense did not explicitly say anything about the plan to purchase the F-35 fighter jets. In its official statement, it only said that Prabowo and Esper talked about defense cooperation between the two nations.

Prabowo came to America on the invitation of Mark Esper. The general chairman of the Great Indonesia Movement (Gerindra) Party flew there with the ministry’s Defense Strategy Director-General, Maj. Gen. Rodon Pedrason; Chief of the Defense Facilities Agency, Maj. Gen. Budi Prijono; and the Indonesian Air Force’s Assistant of Planning, Air Rear Marshal Andyawan Martono. There were also two Gerindra politicians: a member of the House of Representatives’ (DPR) Defense Commission, Sugiono; and member of the party’s Board of Trustees, Glenny Kairupan.

One of Prabowo’s subordinates who knew about the meeting, said that one of the issues discussed was Indonesia’s stance on the South China Sea conflict. Additionally, Prabowo revealed his wishes for Indonesia to own F-35 jets. The same source said that Prabowo, a former commander general of the Special Forces Command, had also asked why the US would not let Indonesia buy the F-35 jets, whilst neighboring Singapore will have four of them by 2026.

The same source said that the US government instead offered Indonesia to purchase the F-16 Block 72 Viper, the latest variant of the F-16 jets, which Indonesia does not have yet, as well as an airborne radar system. Ambassador Muhammad Lutfi said that the US offered Indonesia to buy F-16 C/D Block 32 without prior reservation, as a replacement for the AB version of the F-16 currently owned by the Indonesian Air Force. “The AB version of F-16 we have is very old. If I’m not mistaken, it was the (made in) the 1990s,” Lutfi said.

Without approval from the US Department of Defense, Prabowo’s desire to buy the F-35 will likely stay as a dream. Major Gen. (ret) Jan Pieter Ate, executive chairman of the National Defense Industry Association, said that the procedures to buy the F-35 jets are extensive. This is because the jets are a product of the F-35 Joint Strike Fighter (JSF) Program consortium, with members including Britain, Italy, Australia, Canada, Denmark, Norway, and Turkey. Jan Pieter, the former director of international cooperation at the ministry of defense, said the jets are only sold to countries considered as allies of the JSF. “We cannot buy the product even if we have the money,” Pieter said.

The defense ministry has yet to comment on the F-35 purchase plan. The Defense Ministry’s Chief of Public Relations, Brig. Gen. Djoko Purwanto, asked Tempo to inquire about this information from Dahnil Anzar Simanjuntak, the spokesman to the defense minister. Dahnil did not answer a number of questions Tempo asked. “I’m out of town until next week,” he said.

PURCHASING F-35 jets is not a part of Indonesia’s defense strategic plan for neither the 2014-2019 nor the 2019-2024 period. The actual plan is for Indonesia to buy the F-16 Block 72 Viper fighter jets. On October 28, 2019, the Air Force Chief of Staff at the time, Marshal Yuyu Sutisna, said there would be two Viper squadrons brought to Indonesia in 2020. He made the statement five days after Prabowo Subianto was appointed as minister of defense. Indonesia already has 33 units of the F-16 Falcon.

Former Air Force Chief of Staff, Marshal (ret) Agus Supriatna, and former Secretary-General of Defense, Air Vice Marshal (ret) Hadiyan Sumintaatmadja, also said that the F-35 procurement plan never existed, because it is almost impossible to buy the stealth jets. Hadiyan stated that Indonesia plans to bring in the Russian-made Sukhoi Su-35. The contract with Russia was in effect June 2018. The contract indicates that the buyer already has the budget and the manufacturer is able to produce the aircraft. If Indonesia had followed that plan, 11 Su-35s would have arrived in 2020. 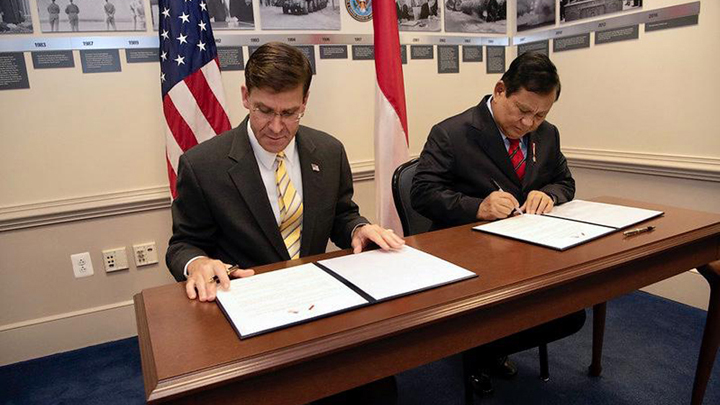 The signing of defense cooperation between Indonesia and the United States of America, represented by Defense Minister Prabowo Subianto and his US counterpart Mark Thomas Esper in Washington DC, US, October 19. Washington DC Indonesian Embassy Doc.

However, the plan to bring in the Su-35 and F-16 Viper died out. A number of sources in the DPR’s Defense Commission and the defense ministry told Tempo that Prabowo is more interested in buying the F-35 because of its sophistication. The plane, for example, has a stealth mode that renders it undetectable by radar. The F-35 is also considered to have a daunting effect on neighboring countries. According to sources, the purchase of the F-35 was also related to Prabowo’s plan to ‘clean up’ the defense ministry and select the main defense equipment based on his own wishes.

The plan to buy the Su-35 was also met with obstacles from the United States. Hadiyan Sumintaatmadja said that in 2018, the US Defense Department’s envoy came to him and asked why Indonesia wanted to buy Sukhoi. “I told them that the plan has been reviewed internally by the Indonesian Air Force,” he said. According to Hadiyan, the US has prohibited paying the Su-35 using US dollars. Apart from that, he said that there were trade returns constraints, namely that the commodities demanded by Russia have not been fulfilled by Indonesia. “There are also international politics put into considerations,” said Hadiyan.

On January 28, Prabowo met Russian Defense Minister Sergei Shoigu in Moscow. Six months later, Prabowo flew back to Russia to attend the Parade for the 75th Anniversary of Russia’s victory against Germany in World War II. During the visit, he met Russia’s Deputy Minister of Defense, Col. Gen. Alexander Fomin. The Indonesian ambassador to Russia at that time, Wahid Supriyadi, said that the meeting did not specifically discuss the plan to purchase Sukhoi. “Russia understands Indonesia’s position,” said Wahid.

Following those visits, Prabowo submitted a proposal to obtain US$20 billion—or Rp291 trillion—in foreign loans to the National Development Planning Minister Suharso Monoarfa on July 13. The loan would be used to buy defense equipment in the Indonesian Military (TNI) for a period of five years. In the 2021 budget plan, the defense ministry is allocated a budget of Rp137.3 trillion, a fat increase from 2020’s Rp117.9 trillion.

Three days before sending the proposal to Minister Suharso, Prabowo sent a letter to Austrian Defense Minister Klaudia Tanner. In this letter, Prabowo expressed his desire to purchase 15 units of Eurofighter Typhoon fighter jet for the Air Force. He also paid attention to the sensitive issue of purchasing Eurofighter. In Austria, the purchase of these jets had turned into a scandal that dragged state officials, because the price and operating costs were considered too high. “I believe the proposal I put forward offers changes that are beneficial to both parties,” Prabowo wrote.

On October 20, after leaving the US, Prabowo visited Austria and met with Defense Minister Klaudia Tanner. The Indonesian Ambassador to Austria, Darmansyah Djumala, accompanied Prabowo and Sugiono—member of the DPR Defense Commission from Gerindra—at the meeting. “We were asked to facilitate the meeting,” said Darmansyah.

An Austrian local media, Krone Zeitung, reported that Defense Minister Klaudia Tanner stated that the meeting with Prabowo was a first. “This is the first step for discussions at a technical level,” Tanner said. Another Austrian media, Der Standard, said the meeting lasted just one hour out of the two-hour planned. After the meeting, Der Standard reported, there was only a dry release. The two parties did not even pose for handshakes in front of the cameras.