Throwing the Net to Contest China


The United States is avidly lobbying Indonesia regarding the South China Sea conflict. The issue was also discussed during Prabowo’s US visit.

MICHAEL Richard Pompeo felt a single visit to Jakarta was not enough. In a speech, the US Secretary of State claimed he was pleased to be back in Indonesia after his first visit in 2018. “It is important for me to return and strengthen these important and fundamental ties with Southeast Asia,” said Pompeo at the Indonesian Foreign Ministry building in Pejambon, Central Jakarta, on Thursday, October 29.

In a brief address that lasted less than five minutes, Pompeo said he had been in discussion with Foreign Affairs Minister Retno Lestari Priansari Marsudi. One of the topics discussed was the conflict in the South China Sea. “We repudiate the claim of the Chinese Communist Party over the South China Sea,” said the minister, who is the former director of the Central Intelligence Agency of the United States of America.

The South China Sea conflict is one of the major sources of tension between China and the US. China is using the nine dash line to claim sovereignty over the waters. The nine imaginary dashes created by China is in violation of the United Nations Convention on the Law of the Sea (UNCLOS) ratified in 1982. According to the convention, a state has sovereignty over 12 nautical miles from its outmost land with economic rights up to 200 nautical miles in an exclusive economic zone.

In a special interview with Tempo, US Assistant Deputy Minister of Defense for ASEAN, Reed B. Werner, admitted to being worried about China’s activities in the zone. Werner assessed that China was pressuring the countries of Southeast Asia to release the region and was obstructing access to sea resources valuable for economic growth. He also accused China of having become increasingly aggressive while the countries in the region were preoccupied with Covid-19. Werner promised his country would provide assistance to Indonesia through joint military exercises, security assistance, military technology, and information exchange on the situation in the South China Sea.

Minister Retno Marsudi told Tempo on November 3, that she had discussed with Pompeo Indonesia’s stance regarding the South China Sea. She said Indonesia had no wish for conflict in the region. But Retno also reiterated, Indonesia would support no unilateral claim over the waters by any single nation. “Any claim by any nation has to be based on international law, specifically the UNCLOS 1982,” said Retno.

The US’s lobbying with Indonesia regarding the South China Sea was not limited to Pompeo. In mid- September, Deputy US Secretary of Defense, James H. Anderson, also visited Jakarta and met with several dignitaries, including Coordinating Minister for Maritime Affairs and Investment Luhut Binsar Pandjaitan, Defense Minister Prabowo Subianto, Commander of the Indonesian Military (TNI) Air Chief Marshal Hadi Tjahjanto, and Minister Retno. According to Retno, the meetings discussed several issues, including counter-terrorism, US investment in Indonesia, and the South China Sea.

The US’s effort to garner Indonesian support has continued. The US Secretary of Defense Mark Thomas Esper invited Prabowo Subianto to the US. In fact, the former Commander General of the Indonesian Army Special Forces Command was said to have been banned from visiting the US since 2000, for his alleged involvement in the May 1998 riots and kidnap of activists. A subordinate of Prabowo, who knows of the meeting between his superior and Esper at the Pentagon, said the US asked for Indonesia’s support to waylay Chinese dominion over the South China Sea.

Chair of the House of Representatives (DPR) Defense Commission, Meutya Hafid, verified the meeting discussed the conflict over the South China Sea. The official website of the US Department of Defense stated the meeting between Prabowo and Esper resulted in a number of agreements, including increased military cooperation and maritime security. 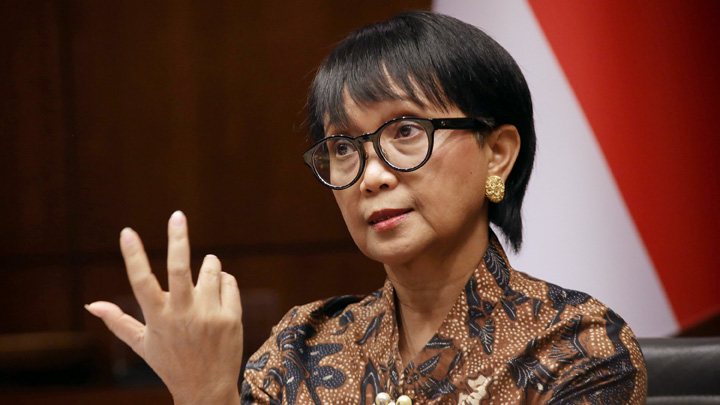 Despite refuting China’s claim over the South China Sea, neither is Indonesia willing to be caught in the middle of the skirmish between the two countries. Retno said Indonesia would not side with one and be in clash with the other. Indonesia, said Retno, is firm in carrying out its free and active foreign policy by not taking sides with one or the other of the parties.

The scuffle in the South China Sea was also a topic discussed by Prabowo when holding a teleconference with Japanese Defense Minister Nobuo Kishi, on Monday, November 2. Prabowo and Nobuo exchanged views regarding the issue. Nobuo said Japan repudiated any unilateral effort to replace the status quo with one that escalated tension in the region.

Defense Ministry spokesperson, Dahnil Anzar Simanjuntak, said Prabowo was keeping close tabs on the fracas over the South China Sea. According to Dahnil, Prabowo had communicated with the defense ministers of the US, China, Malaysia, and Australia, to maintain security and stability in the region. “Indonesia has no wish to become involved in the clash,” he said.

THE US Secretary of State Pompeo also met with dignitaries of the Ansor Youth Movement, a branch of the Nahdlatul Ulama (NU) organization. He attended the event titled Nurturing the Shared Civilizational Aspirations of Islam Rahmatan li al-’Alamin. In his address, Pompeo asked that religious leaders defend the right to worship as a basic human right.

He mentioned the danger the Chinese Communist Party posed as one of the threats to religious freedom. “The fact remains, one of the biggest threats to freedom of religion is coercion from the Chinese Communist Party to all peoples of different faiths,” said Pompeo. The US has often accused China of violating human rights in their treatment of the Uighur Muslims in Xinjiang.

NU Executive Board (PBNU) Chairman Yahya Cholil Staquf said Pompeo’s attendance to the event was because he had sent an invitation to the US Department of Defense on September 3. In the invitation, Yahya asked Pompeo to deliver his ideas regarding Commission on Unalienable Human Rights. On October 3, the US Department of State verified that Pompeo would attend the event. Similar to the stance of the government, Yahya refuses to enter the fray between China and the USA. Pompeo’s statements while in Indonesia have disgruntled China.

China’s Ambassador to Indonesia, Xiao Qian, slammed Pompeo’s trip to Indonesia as a mere attempt at provocation and attack towards his country. As relations between China and the US heated up, Retno Marsudi reiterated yet again that Indonesia will not side with any one country. “I have made Indonesia’s position clear. China and the United States of America understand this very well.”