A student of the Semarang State University is accused of being supporters of the Free Papua Organization after he went to the Corruption Eradication Commission reporting an alleged corruption by the rector. He and his friends receive repeated pressure from the campus.

FRANS Josua Napitu’s phone was flooded with words of encouragement on Monday, November 16. Friends encouraged the law faculty student at the Semarang State University (Unnes) to remain critical and not quit his study.

Frans was confused by the message. He replied to one of the messages asking what was going on. The friend then said that the campus was sending Frans back to his parents, meaning he was suspended, to undergo ‘moral and mental rectification’ for six months. The Dean of the Faculty of Law, Rodiyah, gave him the suspension. “I found out about it last,” Frans said on Wednesday, November 18.

By Monday noon, he was still unclear about the reason behind his suspension. The faculty never contacted him, and Frans suspected that it had something to do with what he reported to the Corruption Eradication Commission (KPK).

Three days earlier on Friday, November 13, Frans visited the KPK building in South Jakarta. He reported Unnes’ Rector, Fathur Rokhman, for allegedly practicing corruption in the management of student funds. In his report, Frans said that there were irregularities in the university budget paid by students. 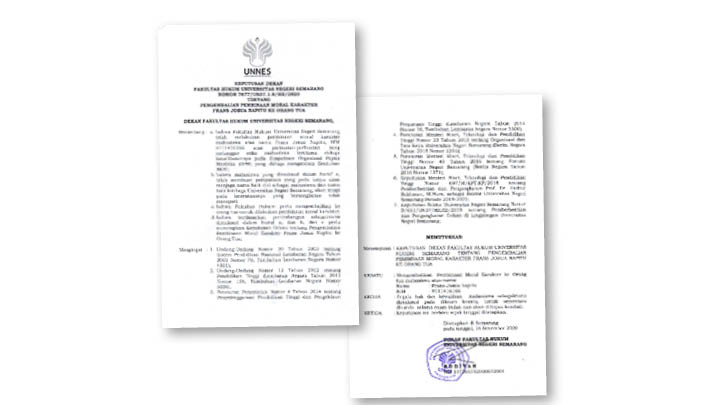 When Frans was at the KPK, his parents received a WhatsApp message from a law faculty administration staff, inviting them to join a Zoom meeting. According to Frans, his parents could not join the meeting as it was so sudden. “My dad doesn’t have the Zoom app either,” the 21-year-old student said.

On Monday afternoon, November 16, his parents received another WhatsApp message from a law faculty administration employee. The message included a portable document format (PDF) file of the Dean’s Decree No. 7677/UN37.1.8/ HK/2020 about the returning Frans Josua Napitu’s moral character supervisory to his parents’. The reason for the sanction was unimaginable to Frans: he was accused of being a supporter of the Free Papua Organization (OPM).

Frans finds the accusation ridiculous. Five months ago, he clarified the issue in front of the dean office team. The accusation began after he uploaded a photo on his Facebook account page, showing him with activists from various institutions in Semarang, Central Java, during the #PapuaLivesMatter anti-racism demonstration in June.

The dean office asked for Frans’s explanation on July 8. “The accusation has been refuted and the case was closed after I clarified it,” Frans said.

AFTER graduating high school in Simalungun, North Sumatra, in 2016, Frans applied to Unnes’ faculty of law upon the advice of a teacher. Once accepted, he immediately enrolled in campus activism. He joined the Student Debate Activity Unit, became a member of the Catholic religious organization, and was active in the Student Executive Body (BEM). He is an active critic of campus policies. “Particularly those that I believe are not taking sides with the students,” Frans said.

He also advocated for students who have difficulty paying tuition fees, an activity that got him appointed as Minister of Advocacy for Unnes BEM in 2019. According to Frans, he felt a call to be involved in campus advocacy because he wanted the university to be open to everyone. “My goal is simple, for everyone to have access to higher education that is fair and democratic, in line with the objectives of establishing the Indonesian state,” he said.

Life as a campus activist is not easy. Frank faced frequent pressures. Prior to reporting the rector of Unnes to the KPK and joining the Papua solidarity demonstration, Frans had often been reprimanded by the dean office. Unnes’ Student Body’s Minister of Strategic Studies, Ignatius Rhadite, said that since 2018 Frans has been regularly summoned by the faculty for his campaigns for cheap education. “He has a dream of making Unnes a campus that sides with the poor people,” said Rhadite.

According to Rhadite, Frans is also an avid observer of the relocation of the campus of Faculty of Education’s Elementary School Teacher Education Study Program. Frans also criticized the community service program’s tuition fees, which are partly borne by students. “Frans’ advocacies were successful even though he often had to face the ethics trial,” said Rhadite.

Now, Frans is the Coordinating Minister for Social and Political Affairs at Unnes BEM. In addition to investigating allegations of corruption by the rector, he is also monitoring the issue of tuition fees during the Covid-19 pandemic. Students object to paying full tuition because of the distance learning method. Frans, together with Unnes BEM and a number of students, have rallied three times to raise awareness over this issue.

In July, the student alliance led by Frans also submitted a judicial review to the Supreme Court against the Education and Culture Minister’s Regulation No. 25/2020 on the higher education operational cost unit standards. They also reported Minister Nadiem Makarim to the National Commission on Human Rights (Komnas HAM) for his being insensitive to the people’s economic hardships during the pandemic.

As a result of these actions, Frans, Rhadite, and three other students were summoned by the dean. “They created a WhatsApp group with the dean,” Rhadite said.

According to Rhadite, they were also ‘invited’ to the dean’s residence and a number of other meetings at the dean’s office. “We were pressured to withdraw the judicial review and the report to the Komnas HAM, otherwise they would send us home back to our parents,” said Rhadite. The students did not budge. 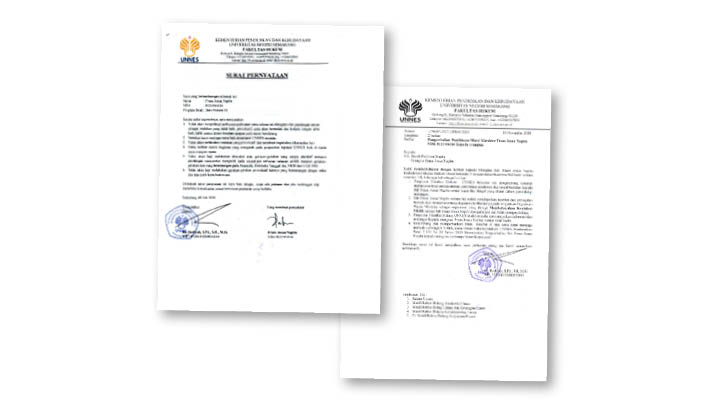 Choirul Anam, member of the Komnas HAM, said his agency was reviewing the complaint from Frans and his friends. He regretted the campus attitude of closing dialogue opportunities with the students. “In a situation like this, the campus must be wise. Dialogues must be continuous, not just once or twice,” Choirul said.

According to Choirul, Unnes acted wrongly in dealing with students who have differing opinions. The Komnas HAM plans to summon Unnes Rector Fathur Rokhman regarding the complaint and inquire about the sanctions against Frans for filing a report to the KPK. “Linking Frans with the OPM is too much,” he said. Choirul said that just because Frans showed concerns over the Papua issue, it does not mean that Frans is a supporter of the organization.

The Dean of the Faculty of Law, Rodiyah, confirmed that Frans was summoned in July. He was asked to clarify the rumor that he was an OPM supporter. The proof of the accusation, Rodiyah said, was uploaded on Frans’s social media. “Based on the digital footprint that we have.”

During the clarification, Rodiyah said, Frans was asked to sign and agree to six things, which include not being provocative and create disturbance, protecting the name and reputation of Unnes as an institution, not being involved in sympathetic actions against political prisoners, and to obey student ethics and rules.

According to Rodiyah, Frans has violated those six terms by reporting Rector Fathur Rokhman to the KPK. “Reporting the Unnes Rector has caused a disturbance,” Rodiyah argued.

Fathur Rokhman was reluctant to respond to the corruption accusation. He said he was focusing on staying healthy while carrying out teaching and learning activities virtually. “I ignore negative thoughts and hoaxes,” Fathur said. He claimed that Unnes’ financial management was transparent and in accordance with the principles of integrity.

On campus, Frans is not only engaged in activism. He has made the university proud several times through debate competitions at the regional and national levels. In 2018, he qualified for the quarter-finals of a debate competition held by the General Election Supervisory Agency. 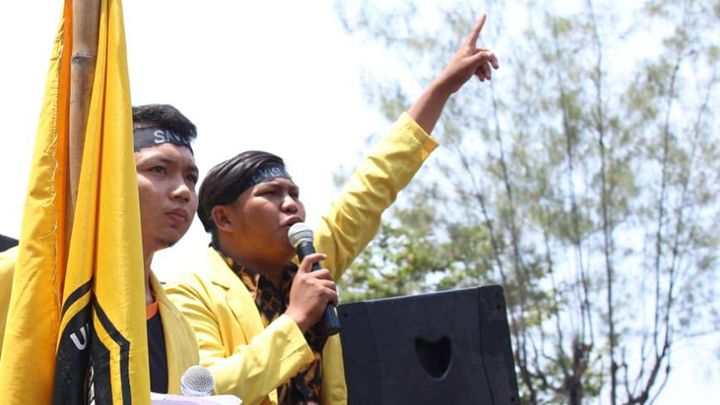 Frans was also a finalist of the outstanding students at the faculty of law in 2017. Thanks to his academic achievements, he received the Bidik Misi Scholarship from the first to eight semesters. He has a GPA of 3.6.

Outside campus, Frans is an active volunteer for the Semarang Legal Aid Institute (LBH). There, Frans participated in advocating the construction of places of worship, labor, and the struggles of minority groups.