The Attorney General’s Office has not named any suspects involving the corruption of grant funds from the youth affairs and sports ministry, which has been under investigation since 2018. The Corruption Eradication Commission is ready to look into a bribery effort intended to stop the investigation into the case.

FOUR witnesses arrived at the Round Building in the complex of the Attorney General’s Office (AGO) in South Jakarta, on Tuesday, November 1. The three of them—with initials MSG, EK, and FA—are directors of three companies contracted by the Indonesian National Sports Committee (KONI). The fourth witness, TP, is a driver at the youth affairs and sports ministry.

The AGO’s directorate of criminal investigation under deputy attorney general for special crimes had summoned them in the context of their investigation into suspected misuse of Rp25 billion of grant funds which the sports ministry had given to KONI for the 2016-2017 budget year. “The AGO is still pursuing grant funds indicated of being involved in corruption crimes,” said Hari Setiyono, chief of the AGO’s legal information center on Friday, December 4.

The questioning of those four witnesses was a part of a two-year ongoing investigation by AGO. The order to begin the preliminary investigation was signed by the then deputy attorney general for special crimes Adi Toegarisman back in July 2018.

As of December, criminal investigators have questioned about 300 witnesses. Those three company directors contracted by KONI are said to know about the flow of the grant funds. However, the AGO has not named any suspects. “We will convey such news at the appropriate time,” said Hari.

The investigation expanded to suspected losses from the budget of the Indonesian Gold Program Administrative Unit (Satlak Prima), which officially began in 2015. The sports ministry formed this body to foster the development of national athletes to compete at the international level. 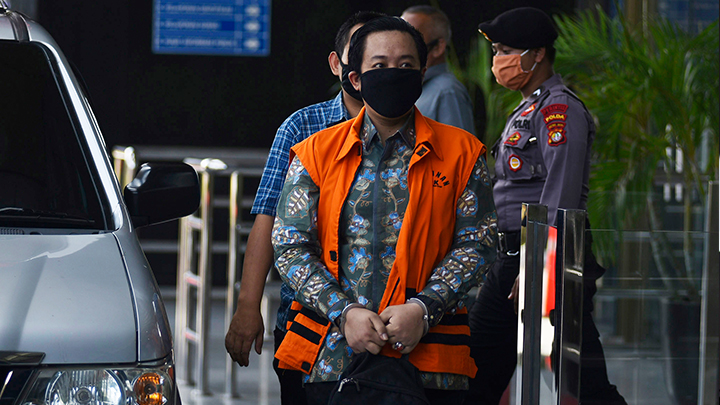 Miftahul Ulum at the KPK building, Jakarta, in June./TEMPO/Imam Sukamto

The government disbanded the Satlak Prima through Presidential Regulation No. 95/2017 regarding improvement of national sports achievements. However, tens of billions of rupiah of state funds had already been disbursed to that body.

Indications from the preliminary investigation regarding such a flow of funds could be seen from the questioning conducted at the AGO. Investigators questioned Youth Affairs and Sports Ministry Treasurer Fauzan Rahim on October 20. The summon letter mentioned the matter of calculating state losses in the disbursement of grant funds for KONI. However, Fauzan was mostly asked about funding for the Satlak Prima program. “That is the only thing I talked about,” said Fauzan.

The AGO began fast-tracking questioning once they started working with the Supreme Audit Agency (BPK). On May 8, the BPK sent their audit findings regarding the grant funds to the AGO. “There were many problems with the sports ministry’s financial reports from that time. For three years in a row (2017-2019) they were given the disclaimer status,” said BPK Deputy Chairman Achsanul Qosasi.

Sports Ministry Secretary Gatot S. Dewabroto said that the AGO has questioned dozens of their staff members. Most of them are employees who work at the ministry’s deputy IV office. This office deals with fostering the development of some sports, including temporary bodies formed by the government, such as the Satlak Prima.

Suspected misuse of the Satlak Prima budget also attracted the attention of investigators at the National Police’s criminal investigation unit. However, neither the AGO or police investigations have been able to crack the case.

THE Corruption Eradication Commission (KPK) arrested nine civil servants in a sting operation in the complex of the youth affairs and sports ministry on Tuesday, December 18, 2018. KPK officers also detained ministry’s deputy IV Mulyana and some echelon III officials. Five of them, including Mulyana, were named suspects. They are suspected of being involved in the corruption of sports ministry’s grant funds for KONI.

The KPK’s criminal investigation expanded to include higher-ranking officials. They arrested Miftahul Ulum, a personal assistant of Youth Affairs and Sports Minister Imam Nahrawi, in September 2019. He is suspected of receiving Rp11.5 billion from KONI officials to arrange for them to receive grant funds.

Two weeks later the KPK arrested Imam Nahrawi. He was suspected of knowing about the receipt of those funds. The Central Jakarta Corruption Court sentenced Miftahul to four years imprisonment and fined him Rp200 million on June 15. The same court sentenced Imam to seven years imprisonment and a fine of Rp400 million on June 29. The two were found guilty of accepting bribes and gratuities to arrange for the sports ministry to give grant funds to KONI.

Hari Setiyono said that the questioning done by his institution differs from the KPK’s criminal investigation. KPK investigators are looking at the 2017-2018 budget for grant funds. “The AGO is focusing on the disbursement of grant funds for the 2016-2017 period,” he said.

In June and July 2019, the AGO and KPK asked Gatot S. Dewabroto to make some clarifications. When speaking at those two institutions, Gatot explained the regulation which was the basis for the sports ministry to provide assistance to KONI.

The provision regulating the distribution of grant funds is found in Article 21 of Presidential Regulation No. 95/2017 on the increasing national sports achievements. “That article actually closes off any chance to provide assistance to KONI,” he said.

Based on that regulation, Gatot continued, the distribution of grant funds should have been given directly for each sport. He said the same thing when testifying at the trials of Miftahul Ulum and Imam Nahrawi.

However, Gatot did not know why sports ministry officials still gave KONI grant funds. “I don’t really understand it. At that time I was secretary of the ministry. The authorized budget users were the related deputy offices,” he said.

KONI Deputy Secretary-General Othniel Mamahit explained that the grant funds received by KONI were not allocated for sports. KONI had requested grant funds for the 2016-2017 budget year for supervision and mentoring expenses.

He conceded that during the organization’s previous administration there were a lot of problems surrounding the management of those funds. The BPK found a number of transactions suspected of being fictitious on a number of KONI’s financial reports.

The AGO summoned about 140 athletes and managers who were connected to KONI’s working programs. Their statements corroborated the existence of some bogus activities for some sports. “In the future we will likely set up an accountable budgeting process so that there are no more incidents where officials at the ministry and KONI end up facing the KPK,” said Othniel.

THE testimony of Miftahul Ulum when he was a witness for the defendant Imam Nahrawi in the Central Jakarta Corruption Court on May 15, drew public attention. He divulged the plan for Rp10 billion in bribes for former deputy attorney general for special crimes Adi Toegarisman and BPK Deputy Chairman Achsanul Qosasi.

Miftahul said that the bribe was to ‘put the brakes’ on an AGO investigation into the corruption of grant funds from the sports ministry. He explained the plan to give the money was discussed with KONI officials with initials HMD and AW at a hotel in Central Jakarta.

During the trial, Miftahul explained that they agreed to provide Rp10 billion out of KONI’s borrowings and cash account. From that, Rp7 billion was to be given to Adi Toegarisman and Rp 3 billion was for Achsanul.

The AGO formed a special team in the wake of Miftahul’s court testimony. After being authorized by the court, the AGO’s investigative team took custody of Miftah from KPK detention in order to delve deeper into his testimony. 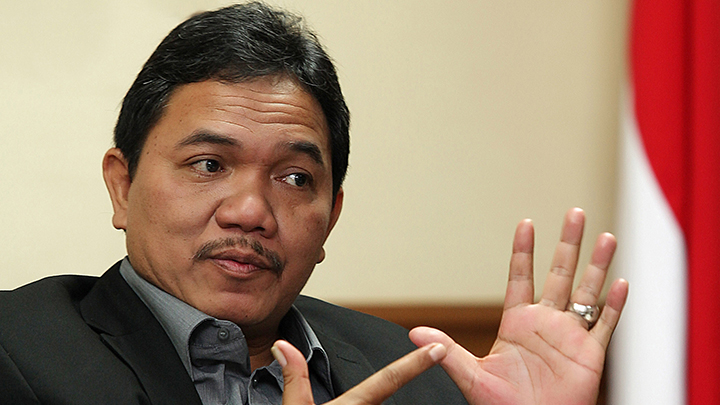 The questioning conducted on May 19 led to the conclusion that there was no evidence for Miftah’s claim. “There are not enough leads for us to use to verify his testimony. Nevertheless, as proof of this, Miftahul has stated his apology,” said Hari Setiyono.

Bhatara Ibnu Reza, deputy chairman of the Prosecutors Commission, said that the commission attempted to clarify the planned bribery of Miftahul and others. His team met Miftahul after the latter was questioned at the AGO. However, Miftahul is not talking. “He said the he will not open up unless there are guarantees for his safety,” he said.

The Prosecutors Commission asked Miftahul to report to the Witness and Victim Protection Agency, but he declined. “Miftahul seems to see us as being a part of the AGO corps,” said Bhatara.

attempted to contact Adi Toegarisman in order to clarify Miftahul’s testimony. However, he did not respond to telephone calls and interview requests sent by text message as of Saturday, December 5. Speaking to some reporters, Adi said that he considers those bribery accusations to be a slander. He said that he never met with anyone from the sports ministry or KONI when investigating the grant funds case.

Achsanul Qosasi also refuted Miftahul’s testimony. According to him, the case being handled by the AGO began with BPK’s audit findings for the 2016-2017 budget year. Achsanul said that he oversaw a budget audit for 2017-2018. “I don’t want to comment further about that. He has clearly denied it and apologized,” he said.

Miftahul Ulum’s lawyer, Wa Ode Nur Zainab, verified his client has rectified his testimony and apologized. Miftahul made this statement when reading his legal argument. However, Wa Ode added, Miftahul’s statement does not annul the testimony about the planned bribery. “He apologized for mentioning those two names during the trial. Nothing from the substance of his testimony has been withdrawn,” he said.

According to Wa Ode, the KPK has leads for investigating that planned bribery. The KPK has recorded electronic surveillance of the discussion of the plan. “A surveillance recording was played for our client which connects those involved. What more are they waiting for?” he said.

KPK leaders have opened the door for a preliminary investigation into Miftahul Ulum’s testimony. KPK Deputy Chair Lili Pintauli Siregar said that the leadership has put together an investigative team to study Miftahul’s testimony. “We are going to see if there is sufficient evidence and witness testimony, and study verdicts from previous cases,” he said.