Taking the Lands of Ancesstral Kings


The Lake Toba tourism development program is being accused of plowing over fields where villagers earn their living. A battle of claims over the land.

A LETTER arrived, disrupting the gathering for Christmas preparation of the Butarbutar clan, on Wednesday, December 16. Investigators from the Toba Samosir District Police had summoned eight of their family members. A high-ranking official from the Lake Toba Authority Board had reported those eight people to the police last October.

The letter mentioned Nurveni Butarbutar as one of those to be questioned. Nurveni was surprised when he read the letter. The reporting party accused him of unauthorized usage of land claimed to belong to the Authority Board in Pardamean Sibisa village, located in the Ajibata subdistrict of the Toba Samosir Regency, North Sumatra. “Even though that incident was from a long time ago, in May 2018,” said Nurveni, a day after receiving that police summons.

Nurveni, 52, considers the complaint to be odd. According to him, the land mentioned by the reporting party is a part of the ancestral land of the Butarbutar clan. Their ancestral land covers 120 hectares, stretching from Pardamean to Sigapiton village.

Nurveni planted about one hectare of land in Pardamean village. It is located on a hilly area which faces Lake Toba.

The Butarbutar clan has had control over this land on account of their family standing as a King of Bius—a local reference which refers to the first families to inhabit a certain area. There are four clans in the King of Bius customary community, namely Butarbutar, Sirait, Manurung, and Nadapdap. The Butarbutar clan set up residence and began farming the land decades ago.

The Lake Toba Authority Board plans to build a road to The Kaldera Toba Nomadic Escape, a region which is being developed as a tourism center at Lake Toba, on land belonging to the Butarbutar clan in Pardamean village. This 2.5-kilometer road runs from Pardamean Sibisa village to the Harangan Motung Forest.

President Joko Widodo formed the Lake Toba Authority Board in 2016. It is hoped that this institution which is directly responsible to the President will expedite tourism development at Lake Toba. This year the government has allocated a budget of Rp2.4 trillion for the construction of tourism infrastructure at Lake Toba.

The government’s ambition is to transform the area around Lake Toba into an international tourism destination. President Jokowi named Lake Toba as one of 10 National Strategic Tourism Zones. This program is a part of Jokowi’s Strategic National Projects as stated in Presidential Regulation No. 3/2016. 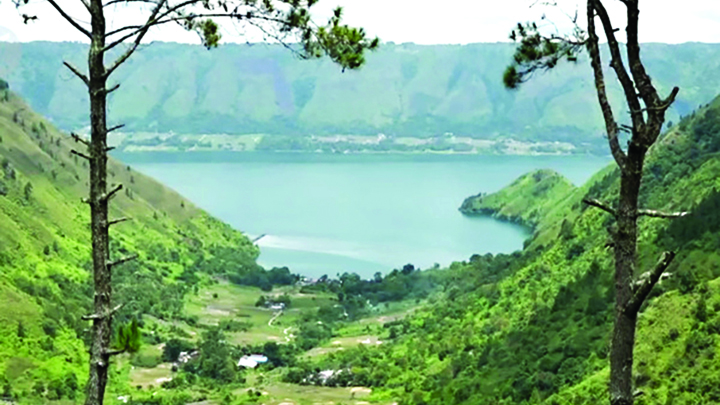 In addition to Pardamean Sibisa village, the construction of tourism facilities is taking place in areas around the lake, such as in the villages of Sigapiton, Sianjur Mulamula, Hutaginjang, and Samosir Island. The government hopes that this tourism development will improve the economy of the people living around the lake.

However, this project is seen as being a public burden. Research done by the Public Initiative Study and Development Group and the Sajogyo Institute about the impact of the development of the Lake Toba tourism zone from 2017 to 2019 strengthens that accusation.

Their research concluded that the Lake Toba tourism project has disrupted the customary community system and its connection to the management of sustainable natural resources. “The theft of customary land also ignited a growing social conflict,” said Sajogyo Institute researcher Eko Cahyono.

The National Commission on Human Rights notes that the construction of tourism infrastructure is indeed a program of the Strategic National Projects which often runs into problems. The Commission has received complaints from residents about infrastructure development at Lake Toba. “Complaints were filed regarding problems with construction of a tourism area and its supporting infrastructure by people living at the 10 New Bali locations, including by residents around Lake Toba,” read a report by the Commission about the land conflict resulting from the execution of Strategic National Projects.

Some heavy equipment such as bulldozers had flattened their fields on Saturday, December 12. Nurveni and his family had planted corn, chili peppers, squash, and coffee on that land. Now all of the plants are destroyed. “Even though our lives depend on that,” said Nurveni.

SIGAPITON village is located on the slopes of the hills which directly border the waters on the east side of Lake Toba. It is next to Pardamean Sibisa village. The air is freshest there in the morning and before late afternoon. Located about seven kilometers from the trans-Sumatra highway, this village is seldom visited by tourists, despite being in the vicinity of Lake Toba.

The Lake Toba Authority Board built accommodations called The Kaldera Toba Nomadic Escape next to Sigapiton village. The Authority Board also built five-meter-high lodgings shaped like a dinosaur egg there in 2017. The government plans to turn Sigapiton into a modern tourism center at Lake Toba.

However, villagers have rejected construction of those tourism facilities since 2018. This was triggered by the actions of the Authority Board, which had relocated the graves of their ancestors. The National Land Agency (BPN) did issue land management rights (HPL) for 279 hectares to the Authority Board. The problem was, 120 of those hectares ran through lands controlled by the clans of the Kings of Bius. The HPL issued by the BPN covered some lands where villagers plant crops and where their ancestors were buried.

Some villagers took legal action against that HPL at the Medan Administrative Court. They felt that the BPN had been negligent in issuing those rights to the Authority Board. When asked about this matter, Saut Simbolon, Head of the BPN’s Toba Samosir Regency office, assessed that there was nothing wrong in the issuing of the HPL. “The documents which were the basis for the HPL came from the ministry of forestry,” said Saut.

Reza Pahlevi, acting Director of the Lake Toba Authority Board, did not have much to say about the turmoil which has taken place in connection with the tourism zone development at Lake Toba. According to him, illegal utilization and destruction of land held by the Authority Board are actions which break the law. He is leaving the resolution of those reports to the police. “We entrust the process to the proper authorities,” said Reza.