In the Name of Development


Some major infrastructure development plans of President Joko Widodo, as described in over a dozen Strategic National Projects in several provinces, have been accused of leading to some human rights violations. Land conflicts could have been avoided if the government did not place the economic agenda above the fundamental rights of the populace.

GOVERNMENT'S obsession to transform Lake Toba into a world-class tourism destination has become a nightmare for the residents of Sigapiton village. Rather than benefitting from the plan, hundreds of villagers were forced to leave the land they have lived on for generations. This has led to unrest, and over the past year clashes have frequently taken place between residents and security forces at this village located on the eastern side of Lake Toba.

Sigapiton village, in the Ajibata subdistrict of the Toba Samosir Regency in North Sumatra, has long been known for its picturesque views. However, the residents there do not live off of the tourism business. The majority make a living by planting and fishing. This village located below the mountainous slopes is about seven kilometers away from the trans-Sumatra highway which connects the cities of Parapat and Balige, the center of the economy and tourism around the lake. 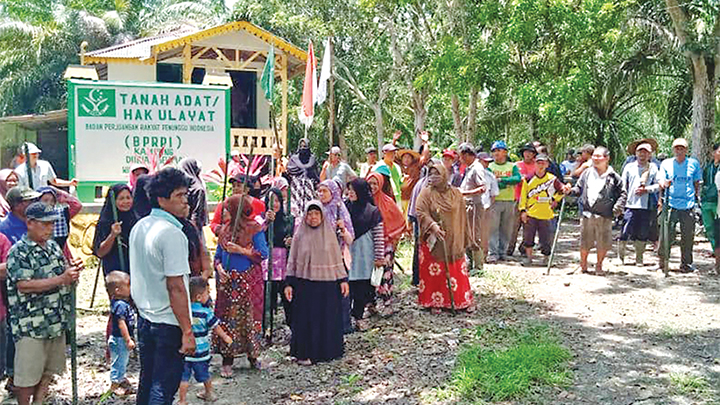 Accusations of human rights violations in Sigapiton were first heard when the government put Lake Toba on the list of 10 National Strategic Tourism Zones. This program is a part of the Strategic National Project launched by President Joko Widodo through Presidential Regulation No. 3/2016. The residents feel that the Lake Toba revitalization program has taken away land ownership rights and reduced their incomes.

What happened in the small village of Sigapiton is certainly far from what the government had planned. President Jokowi believed that his strategic projects would bring prosperity for all residents. When speaking at the commemoration of Human Rights Day on Thursday, December 10, Jokowi assured that all national infrastructure projects were dedicated to being a mean to fulfill the public’s human rights in a fair and even manner. “Civil rights, political rights, economic rights, and social and cultural affairs must be protected in a balanced manner, and nothing will be neglected,” said Jokowi in his speech.

However, the reality in the field is not as beautiful as the sentiments conveyed in that speech. Some civil society groups have come forward with different findings. Amnesty International Indonesia, for instance, released news that in 2020 protections for human rights were weakened in Indonesia. The human rights advocacy group asked the government to evaluate the policies which give precedence to social and economic stability over protecting human rights. It is considered that security forces have excessively been taking action against the public.

The number of violent action taken by the authorities and the silencing of residents has increased during Jokowi’s second presidential term. The year-end conclusions by the Jakarta Legal Aid Society point out that the authorities became increasingly repressive this year. Groups at odds with the government have often been terrorized and hassled.

Readers, this special report is the result of our contribution in the context of celebrating Human Rights Day. We are purposefully highlighting government projects suspected of ignoring the public’s economic, social and cultural rights. Violations of these basic rights seem ironic, as the government insists that it is developing the infrastructure in many provinces in the name of the public interest. In addition to the conflict in Sigapiton village, other conflicts have surfaced in many areas where infrastructure development is taking place. The result is predictable: there are residents who are evicted from their homelands and lose their sources of income. These cases of human rights violations have made the public rightly ask: who are these infrastructure projects really for?

Those who have been victimized have not sat still. They have attempted to seek justice by taking up their cases with a number of institutions, such as the National Commission on Human Rights (Komnas HAM), civil society organizations, and by filing lawsuits. The Komnas HAM said that it has received 84 complaints for agrarian cases since the government unveiled its Strategic National Programs for 2017-2019. Complaints have been filed by people victimized by the construction of toll roads, ports, and railways. Cases have occurred in every part of the country.

We have been working on this special report for the past two months. It began by discussing this issue with some civil society activists and groups. We met with figures from the Komnas HAM, the Auriga Nusantara Foundation, and the Indigenous Peoples Alliance of the Archipelago (AMAN). Their explanations are used to identify human rights violations which have taken place at a number of Strategic National Project programs being carried out by the government. 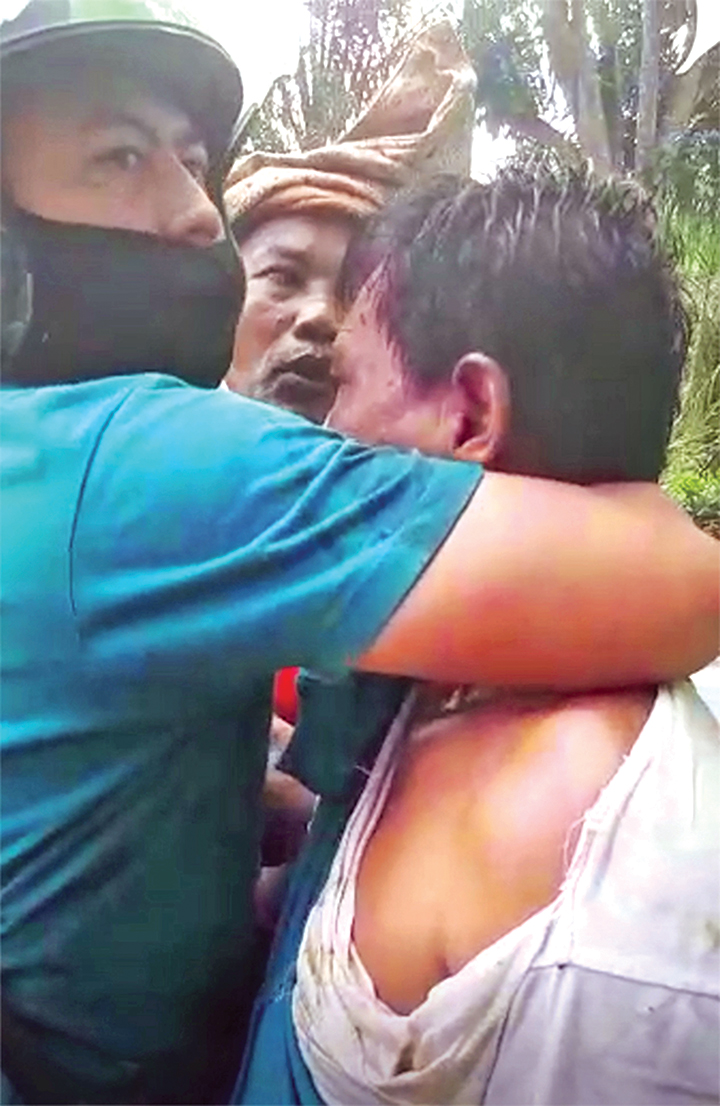 A clash during the acquisition of the land of the Rakyat Penunggu customary community in Durian Selemak, Langkat, last September. AMAN Doc.

During our initial research we discovered dozens of government projects said to be violating the human rights of local residents. However, we could not cover every one of them. The editors finally agreed to select five conflicts which are still taking place. The magnitude of the events, the connection between land conflicts and the strategic national programs, and the types of violations of economic, social and cultural rights were our main references. The limited number and maneuverability of our reporters during the Covid-19 pandemic also played a factor in this coverage.

In addition to taking up the conflict in Sigapiton village, we looked into suspected human rights violations taking place at the sugarcane plantation and sugar factory construction project in Kampung Durian Selemak, North Sumatra. The Rakyat Penunggu customary community there is conflicting with Perkebunan Nusantara II. This neighborhood has become a victim of the government on account of President Jokowi’s ambition to achieve national sugar self-sufficiency by 2023.

We sent contributor Adinda Zahra from Medan to visit Kampung Durian Selemak and Pertumbukan in the Langkat Regency. Adinda traveled for two hours from the City of Medan to reach those two villages. The roads there were muddy and full of potholes. After staying at a local residence for three days, Adinda was able to gather stories about how locals have suffered due to being intimidated by the authorities.

Yohanes Seo, a Tempo contributor in East Nusa Tenggara, left Kupang and headed to the Nagekeo Regency to cover the conflict between the customary community and the Lambo Reservoir construction project. The project site can only be reached by riding a motorcycle. He was literally stuck in the mud several times along the road. “The lighting was not very good, which made the trip more dangerous,” he said. 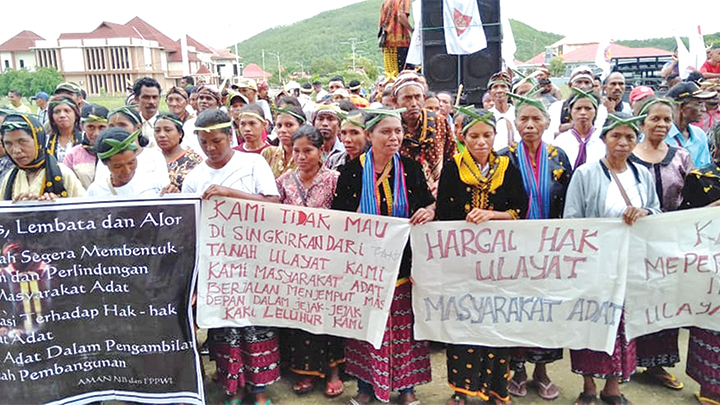 The Indigenous Peoples Alliance of the Archipelago of the Nusa Bunga chapter stage a demonstration at the Nagekeo regent’s office, in the City of Mbay, East Nusa Tenggara, March 2019. https://perempuan.aman.or.id

Technical difficulties arose when we covered a land dispute which followed construction of the Trans Sumatra Toll Road in Lampung and along the Pekanbaru-Dumai stretch. Precautionary measures in facing the spread of Covid-19 were our main concern when sending reporters to these far-flung locations. Coverage of the conflict involving the Yogyakarta International Airport was obstructed due to the Covid-19 pandemic. Coverage of these two stories continued after arranging for assistance from different personnel.

We do not deny that we have skipped coverage of a number of human rights violations suspected to have occurred at other infrastructure projects. We promise to continue to monitor all of these cases and to write about them. We hope that this effort will become a reminder that there are social groups whose human rights are being nullified on account of misguided development efforts. Even a single case of human rights being violated is one too many and should be prevented.

Unfortunately, many predicted the situation would likely worsen. The new omnibus Job Creation Law is seemingly acting like a bulldozer for pushing through construction plans. At present, the government is planning to launch 41 strategic projects in 2021. The budget for those projects running to 2024 comes to Rp6,555 trillion. If this trend of human rights violations continues, there will be more victims in the name of development.