Indonesia counts on young athletes to return as the swimming queens in Southeast Asia, as the country have none for the last decade. They are studying and training in the world’s swimming Mecca.

TWICE a week, pounding waves in Cottesloe Beach, about 12 kilometers from Perth, Australia, is Elysha Chloe Pribadi’s training mate during the Covid-19 Pandemic. Swimming pool closure all over Australia leaves her no choice. Indonesia’s future female swimmer needs to maintain her stamina and mental. The challenges she needs to conquer are cold water, winds, and changing current. “It’s very difficult to swim straight in the sea,” she said, Tuesday, January 12.

The 15-year-old athlete, who is the main contingent of the Jakarta Province, has to be aware of the presence of white sharks roaming off the Australian coast. In facing off her fear, the teenager who is familiarly called Ely asked her father, Reza Pribadi, to swim together. “So I feel very safe. After several times, I am used to (swim there) and can focus on training,” explained Ely, who has been training in Australia for the last two years.

Ely has been undergoing such training method for about three and a half months. The move was taken as a replacement for the preparation program that was in disarray due to the pandemic engulfing the Kangaroo Country since March 2020. The swimmer, who was born on January 25, 2005, wants to perform maximally when she returns competing. The initial target was to participate in the Australian National Age Championship in April 2020 and the National Games (PON) in Papua in October 2020. However, both tournaments were canceled due to the spread of coronavirus.

Closing the year 2020, Ely won two bronze medals in the state level competition, the 2020 McDonald’s Queensland Championship in Australia, on December 12-18. She won the medals for 100-meter and 200-meter breaststroke. In the 100-meter competition, the 166-centimeter tall swimmer took the third rank after a time record of 1 minute 13.64 seconds. In the 200-meter breaststroke, Ely who has been swimming since the age of three and a half recorded the time of 2 minutes 39.46 seconds.

Now Ely sees international competition as the focus. The best swimmer for the group of age II in the 2019 3rd Indonesian Open Aquatic Championship hopes to be in the national team for the 2021 Vietnam SEA Games and the 2024 Paris Olympic. “There are things to be fixed. Besides mental and physique, experience is very important,” explained Ely, who is prophesied as the new Indonesian swimming queen.

Besides relying on Ely, the management of the Indonesian Swimming Association (PRSI) puts its hope on Azzahra Permatahani to win international competitions. The swimmer who was born on January 7, 2002, is targeted to go through in the 2021 Tokyo Olympic. After earning silver medals in the 2017 and 2019 SEA Games, she set her target on the gold medal. “It it the highest target for now,” said Azzahra when contacted on Tuesday, January 12.

It has been a decade since Indonesia has not been able to win the gold medal in the SEA Games from women’s individual category. The last, Yessy Venisia Yosaputra, became the best in 200-meter breaststroke in the 2011 SEA Games in Palembang, South Sumatra. In the subsequent Southeast Asian sports events, Indonesia could only win silver medals. The last silver medal was presented by Azzahra two years ago in the Philippines.

Besides winning SEA Games, the Olympic Tokyo ticket is the 2021 target for the daughter of Hanif Rusjdi and Nunik Mahawati. The biggest challenge from the graduate of Belibis Club Pekanbaru is to restore her physique and stamina after the national training center (Pelatnas) was closed due to Covid-19. “Swimming feels different after two days not being in the water. All the more six months of self training, it really affects me,” she said.

After rejoining Pelatnas in October 2020, Azzahra started to train routinely nine times a week. Each training lasts for two hours. “I train every morning and afternoon,” she said. Training portion is also added by weight training in the gym and muscle strength training using cord—sports equipment in a form of rubber rope—twice a week. “The gym training lasts about one and half hours, while the cord lasts for 30 minutes,” she added.

In a bid to realize her target, the Walt Disney films fan also hopes to train in the United States. With the huge number of swimming athletes from the US performed in the Olympics, Azzahra believes that that could be an opportunity to learn. “The United States is a good country for a training camp,” she said.

The importance of training overseas was also put forward by swimming legend, Elsa Manora Nasution, 43. Elsa, who competed in the 2000 Sydney Olympic, said that the PRSI was routinely sending athletes to the swimming Mecca countries. The winner of bronze medal of the 2003 SEA Games in Hanoi, Vietnam, for example, had an opportunity to train in the US. “I was the last generation sent, but at the end I was sent home due to the 1998 financial crisis,” said Elsa on Tuesday, January 12. 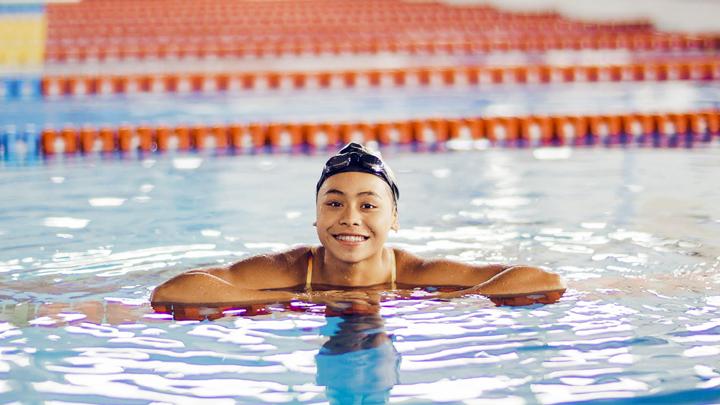 According to Elsa, the program sending athletes to countries of the world’s swimming champions was resumed after economic conditions recovered. At that time, Elsa’s brother, Muhammad Akbar Nasution, took part in the overseas training scheme. “He was sent to Australia because at that time Australia was rivaling the United States’ superiority,” she explained.

The number of swimming competitions overseas, Elsa said, could be an opportunity for athletes to sharpen their ability. During her era, the official swimming competition in Indonesia only took place twice a year, meanwhile, it was so many more in the US. “Athletes can compete at least twice a month,” said the swimmer who specializes in the backstroke style.

The PRSI intends to send female swimming athletes for training overseas. Head of PRSI’s Development and Achievements Department Wisnu Wardhana claimed that his division has devised the long-term training program for potential young athletes. “It is not only (training) for three or six months,” said Wisnu said on Tuesday, January 12.

The 1990s swimming athlete also explained there were difficulties to implement the program. He said that the athletes sent needed to have good academic skills. The PRSI hoped that the athletes did not only train to swim, but also go to school. “If they are going to school but not serious and only swim, it would be useless,” he said.

Wisnu said the PRSI is still monitoring young athletes that are suitable to participate in the program. Wisnu mentioned that the National Collegiate Athletic Association—the largest student-level sports organization in the world— is ready to provide scholarships for studying and training in the United States for Indonesian swimmers. “We are in the process of seeking young athletes for that,” said the 1993 Singapore SEA Games gold medalist.