The Election Organizer Ethics Council fired Arief Budiman as chairman of the General Elections Commission. It was the culmination of a previous dispute.

ARIEF Budiman’s office at the General Elections Commission (KPU) building in Jalan Imam Bonjol, Menteng, Central Jakarta, which is about the size of a badminton court, was filled with some brown couches and a long table in the corner. On Thursday, January 21, Arief was still using that office reserved for the KPU chairman.

A week earlier, on January 13, Arief was relieved of his position by the Election Organizer Ethics Council (DKPP). In a plenary meeting on January 15, KPU Commissioners appointed Ilham Saputra as the acting chairman. “We haven’t thought about moving offices because we are still focused on following up on the DKPP’s decision,” said Ilham via telephone on Friday, January 22.

During a plenary meeting held on Wednesday, January 6, the DKPP concluded that Arief had violated the code of ethics of election organizer. Five of the seven members of the DKPP agreed that Arief had committed a violation. Muhammad Afifudin, a representative from the General Elections Supervisory Agency (Bawaslu) in the DKPP, abstained. Pramono Ubaid Tanthowi—the KPU’s representative in the DKPP—disagreed. The decision was read out and went into effect a week later.

The case faced by Arief began with a complaint lodged by Jupri, a former member of the KPU in the Mesuji Regency for two terms. Jupri, who failed to be selected as a member of the KPU of the Lampung Province in 2019, said the he filed a complaint against Arief with the DKPP after reading news sent to a WhatsApp group for active commissioners and former KPU officials from Lampung. This news said that Evi Novida Ginting, a member of the KPU’s head office who had been removed by President Joko Widodo, was back on the job. “Than a group member sent a letter which had been signed by Arief. That letter was the basis for Evi to resume her duties,” said Jupri.

In March 2020, the DKPP fired Evi as a member of the KPU because they considered that she had not carried out the verdict of the Constitutional Court in a dispute over the election of members of the West Kalimantan Legislative Council (DPRD). The Constitutional Court had decided in favor of a lawsuit filed by Hendri Makaluasc, a legislative candidate from the Gerindra Party, and as such he had the right to be appointed to office. However, the KPU did not carry out the Constitutional Court’s verdict. The DKPP issued stern warnings to all KPU Commissioners. Only Evi was fired. President Joko Widodo removed Evi as a commissioner in a letter dated March 23, 2020.

Evi filed a lawsuit challenging her dismissal at the Jakarta State Administrative Court (PTUN) and won the case. Jokowi then rescinded Evi’s letter of termination and issued Presidential Decree No. 83/P 2020, which nullified the previous decision. In letter number B-210/Kemensetneg/D-3/AN.01.00/08/2020, the state secretariat ministry asked Arief to convey the news about Presidential Decree No. 83/P 2020 to Evi. Arief then signed a letter which included an excerpt from the President’s decision and asked Evi to immediately return to work as a member of the KPU. This is the letter with which Jupri took issue.

After reading a copy of Arief’s letter, Jupri found a photo of Arief accompanying Evi to file the lawsuit at the Jakarta PTUN. He finally reported Arief to the DKPP on September 9. “There is a correlation between that letter from Arief and his presence at the PTUN,” said Jupri.

Arief said that in a hearing on November 18, the DKPP asked why he accompanied Evi to the PTUN. Arief denied accompanying or escorting Evi to register a lawsuit at the court. Evi had registered her case by using an online system at 7:30am, while Arief did not arrive there until around 11am. “I didn’t do anything or meet anyone at the PTUN,” said Arief.

The DKPP also asked Arief numerous questions in order to clarify the letter that Arief sent to Evi. Arief said that it was an ordinary informative letter, not a decision letter. It was a document intended to convey an excerpt from the President’s decision.

During their hearing, the DKPP insisted that Arief include the minutes of the plenary meeting in which that letter had been discussed and approved. According to Arief, as the document in question was an informative letter—not an institutional decision—no plenary meeting had been held to issue such a letter. Even so, a commissioner and the secretary-general had initialed the letter to indicate their approval of its content. “It is not possible that every letter which falls under the category of ordinary administrative work will be taken to a plenary meeting,” he said.

Another matter the DKPP took issue with in Arief’s letter was the request that Evi immediately resume her duties as a KPU commissioner. Arief said this this request was made because the KPU was facing the upcoming regional head elections. Evi’s absence would increase the workload of the other commissioners. He refuted the idea that his letter had reinstated Evi’s status as a commissioner.

The DKPP considered otherwise. Arief was deemed to have been insubordinate and had disrespected DKPP’s decision to fire Evi by being present at the PTUN. They also considered that Arief did not have the authority to ask Evi to immediately resume her duties as a commissioner because the DKPP had fired her in March 2020 and Presidential Decree No. 83/P 2020 did not mention anything about Evi’s reappointment after a PTUN judge had decided in favor of her lawsuit.

DKPP Chairman Muhammad said that their institution did not have any ulterior motives in making that decision. According to him, all of the testimony from the reporting party, reported party, and expert witnesses was assessed by the DKPP. “We were consistent with the facts of the hearing,” said Muhammad.

On January 15, two days after Arief was fired as KPU chairman, 11 experts from various fields of expertise examined DKPP’s decision in a teleconference held by the KPU. It lasted for over three hours and its participants included: Bayu Dwi Anggono, Dean of the Faculty of Law at Jember University; Harsanto Nursady, a legal expert from the University of Indonesia (UI); and Titi Anggraini, former Executive Director of the Association for General Elections and Democracy. Other participants included UI Psychology Faculty professor Hamdi Muluk and Amnesty International Indonesia Executive Director Usman Hamid.

Bayu Dwi Anggono said that each expert gave their opinions from different perspectives. Bayu, for instance, examined Jupri’s legal standing as the reporting party. According to Bayu, it is not clear what loss was suffered by the reporting party on account of Arief’s decision as KPU chairman. Harsanto said that in the context of state administrative law, Arief’s letter to Evi was only declarative in nature. It did not create any specific rights or obligations. “Evi could return to work as commissioner because the President had revoked her dismissal letter, not because of the letter made by Arief,” said Harsanto.

Titi Anggraini said that the President is the only party who has the authority to validate the status the KPU’s membership. According to her, the DKPP should not have only relied on the expert testimony submitted by Jupri as the reporting party. In this examination forum, Titi said that the DKPP should have been more cautious and thorough when considering the expert testimony. 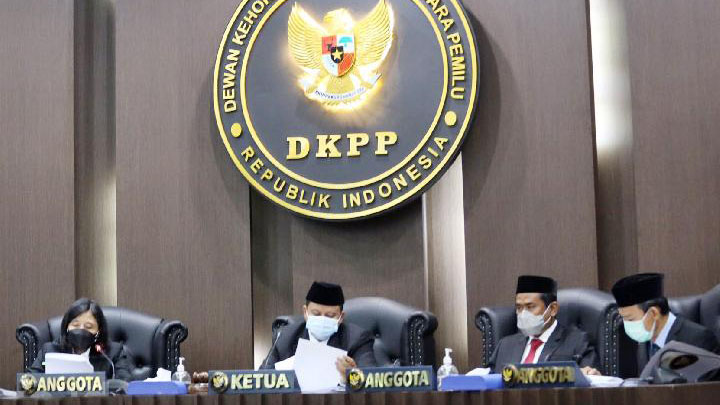 This is not the first time that the DKPP has punished KPU commissioners. On January 16, 2020, six KPU commissioners were given warnings because they were considered to have misinterpreted one of their rulings. At that time, the DKPP ordered the temporary suspension of Anike Wadi, a member of the KPU of the Tolikara Regency in Papua for being affiliated with a political party. Anike could only resume work at the KPU if that party issued a revised list of party officials.

Rather than waiting for that revised list to be issued, the KPU reinstated Anike’s membership based on a letter dismissing Anike from a position at the political party in question. The DKPP assessed that a letter of dismissal is not the same thing as a revised list of party officials.

On June 12, 2020, Arief and three KPU commissioners from the central office were given warnings by the DKPP. They were considered to have been reckless in handling the replacement of Novianus Y.L. Patanduk, a legislative candidate from the Indonesian Democratic Party of Struggle (PDI-P). Novianus failed to be sworn into office as a member of the South Sulawesi DPRD, for no clear reason, even though he had received enough votes.

Arief said that over the past year he faced hundreds of reports and formal complaints about elections, which were received by various law enforcement and ethics institutions, namely the DKPP, the Bawaslu, the police, and public prosecutor offices. He said that each week two or three hearings were held to respond to complaints filed against the KPU. “It could be said that we were getting worn down responding to all those complaints,” he said.