Clamor in a Yangon Corner


The Myanmar military once again took over power via a military coup. The public fight back with a deafening cacophony in a show of defiance.

EVERY night since the military staged a coup in the early hours of February 1, clamor erupts in residential areas across Yangon. People beat and bang pots and pans, kettles, metal plates and anything they can get their hands on while motorists on the streets honked incessantly. In Myanmar tradition, making loud noises is one way to expel evil spirits noises. But this time, they are doing it to challenge the military’s power grab on Monday, February 1.

In what they call a peaceful campaign to support Aung San Suu Kyi and members of her party National League for Democracy (NLD) who were arrested following the coup, Yangon residents wear red clothes and ribbons and put up red balloons outside their homes.

The military did not stand by quietly. Hundreds of people have since been arrested for causing public nuisance. The military also nabbed a number of Suu Kyi’s supporters including Win Htein, a senior NLD member, who had been in and out of jails many times for challenging the military junta. “I have never been scared of them because I have done nothing wrong my entire life,” said the 79-year-old man as quoted by Reuters. 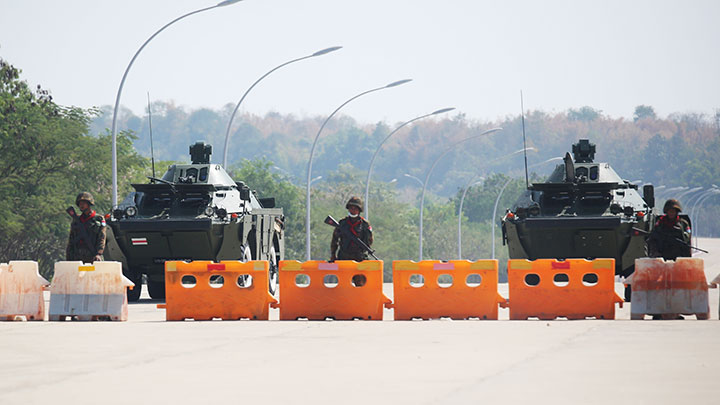 Myanmar's military checkpoint at the road to the congress compound in Naypyitaw, Myanmar, February 1, 2021. Reuters

All communication networks have been shut down in the wake of the coup led by Gen. Min Aung Hlaing. Tempo’s communication with a Yangon resident who was giving update on the condition was cut off and remained unavailable until the time of this report was written. The military also blocked television and radio broadcasts, telephone line and Internet access. Facebook, the most used social media platform in Myanmar was blocked on February 3 and other social media platforms followed suit later.

Besides Suu Kyi, the police arrested President Win Myint, ministers and several other government officials. The NLD announced that around 105 of its members had been arrested.

The military claimed that it acted according to the constitution since Suu Kyi’s government did not act on alleged frauds during the November 2020 elections. The military-backed Union Solidarity and Development Party (USDP) cited voter fraud and claimed it found 10.5 million suspicious votes. However, the national election commission firmly denied the allegations and declared the NLD as the winner. “After many requests, this was inevitable for the country and that’s why we had to choose it (the coup),” Min said in his speech, a copy of which was posted on the military’s Facebook account as reported by Channel News Asia.

The takeover is the culmination of escalating rift between the democratic camp and the military since the last year’s elections in which the NLD won by a landslide garnering more than 80 percent of votes, more than what they achieved in the 2015 elections. It is the second general elections since the military relinquished full control of power in 2011. 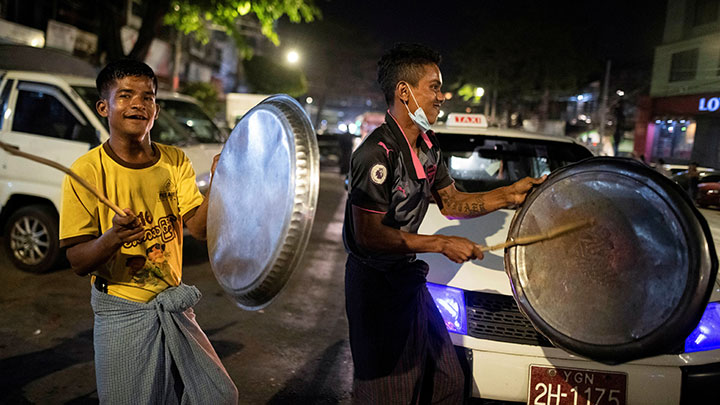 Men hit pots during a night protest against the military coup in Yangon, Myanmar, February 4, 2021. Reuters

Melissa Crouch, an academic with the University of New South Wales, Australia, said that Gen. Min Aung Hlaing had the ambition to become the country’s president before his retirement in the coming July. But USDP’s failure to score sufficient votes in the elections—it got only 33 seats—shattered the general’s dream. Min has pledged to hold fresh elections within a year of the coup. “If the USDP is successful in getting a third of the seats, then Min Aung Hlaing could become president,” Crouch told Al Jazeera.

The civil governments and the military were never on good terms since Myanmar gained independence in 1948. After the first military coup d'état in 1962, the military strengthened its position by consistently eliminating its opposition. The NLD, which won the 1990 elections, was no exception. Suu Kyi was even put under house arrests several times until 2010. “There was a political compromise that eventually gave birth to the 2008 constitution,” explained Priyambudi Sulistiyanto, a Southeast Asia expert at the Flinders University, Australia, to Tempo via telephone on February 2.

The constitution allows the military a secure position in the government similar to the Indonesian military’s dual function during the New Order era. The military got 166 or a quarter of parliamentary seats. They also have a free hand in choosing strategic positions in the government institutions such as the defense ministry and the defense council. “The generals’ tendency to secure interests in politics and businesses have become deeply ingrained.”

The victory of the NLD in the latest elections sparked fear among the top brass as the amendment of the 2008 constitution was likely the top priority in the first parliamentary session scheduled to start on February 1. If the amendment is passed, the military’s position could be further jeopardized. “The scenario the military had crafted in the 2008 constitution could fall apart and that is a very frightening prospect for them,” said Priyambudi.

Priyambudi added that the election fraud cited as a ground for the power seizure and the state of emergency was just a lame excuse. The Myanmar constitution stipulates that the state of emergency can be declared only if there are threats from external forces, threats to the state’s sovereignty, and large-scale insurgency and violence. “Even the electoral fraud allegations could not be not proven,” he said.

But on February 3, the police charged Suu Kyi for violating export-import regulations and possessing illegal walkie-talkies. Meanwhile President Win Myint was indicted under the national disaster mitigation law for not complying with the Covid-19 regulations during the election campaigns. Both offences carry a maximum prison sentence of three years.

The military power grab drew backlash from the international community. United Nations Secretary-General Antonio Guterres called the arrests of political leaders a serious blow to the democratic reform process in the country while the UN Security Council demanded their immediate release. Several human rights activist organizations such as Amnesty International and Human Rights Watch also condemned the coup and called for the release of the political leaders. 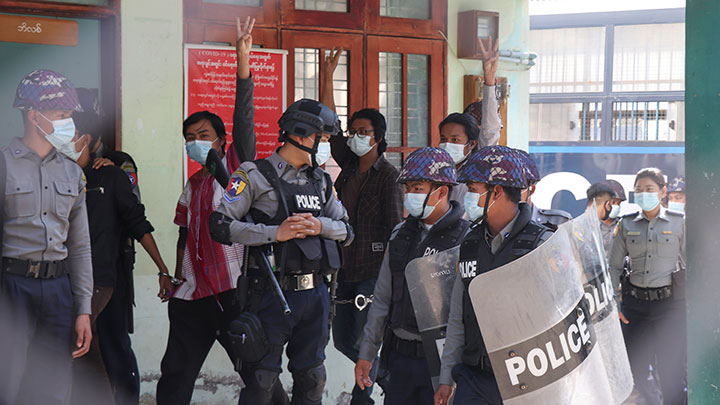 Students arrive at a court after being arrested in a demonstration against the military coup, in Mandalay, Myanmar, February 5, 2021. Reuters

The public’s support for Suu Kyi continued to flood. In civil disobedience movement, medical, teacher and student associations declared their rejection of the coup and demanded that Suu Kyi and colleagues be released. The public’s defiance against the military has spilled over to government offices while protestors—predominantly youths—actively seek support via the Internet.

However, in retrospect, Suu Kyi also had her image tarnished in the recent past. The Nobel Peace laureate received harsh criticism for turning a blind eye to the sufferings of thousands of Rohingya Muslims who were expelled from the northern Rakhine state by the armed forces. The UN Human Rights Commission dubbed the military operations in the Rakhine a genocide against Rohingyas but Suu Kyi chose to deny and even defended the Myanmar army.