EIGHT years serving as the Jayapura Regent, Mathius Awoitauw launched a book titled Kembali ke Kampung Adat, Meniti Jalan Perubahan di Tanah Papua (Returning to Customary Village, Treading the Path of Change in Papua) in early January. In the book, he offers cultural path by involving customary village structure in developing Papua. “Papua is unique. Its floras are the most abundant in the world, more than Madagascar, and its culture is extraordinary,” said Mathius on Friday, February 5.

In the beginning, the customary community leaders did not believe it, while all this time they were not considered to be within the governance. The Regional Legislative Council (DPRD) of Jayapura Regency repeatedly rejected the bill on the local regulations on the indigenous government system proposed by customary leaders and activists since 2008. The customary leaders eventually believed the program proposed by Mathius after being repeatedly convinced.

The local government of Jayapura Regency also increased village fund allocation from Rp100 to 150 million to Rp300 to 500 million per village. Indigenous children from Jayapura Regency are also given the opportunity to become leaders in the regional work unit. The government also provided assistance funds amounting to Rp125 million for nine indigenous communities in Jayapura.

Gradually, their territories are mapped, including their rights to the territory. Until now, the ministry of villages, development of disadvantaged areas, and transmigration, has legalized 14 customary villages. Several other villages are ready to be ratified.

Mathius implements all of the programs to build Jayapura Regency community and resolve various tensions within it. Previously, many developments in the village had to cease because they did not involve the local customary leaders. “There is no coordination between the village government and the customary leaders,” he said.

Long before Indonesia’s independence, according to him, the Papuan people already had their own social system that was different from other regions. Each community group in Papua had a customary government or customary village that was autonomous and could organize the lives of its citizens, from socio-cultural, economic, legal, to political issues.

They inhabited and managed an area which they recognized its boundaries with other groups. They conserved and utilized natural products, including land, forest, and water, in the managed area. They had rules regarding natural management, including the communal land. “For indigenous communities in Papua, nature, humans and communities are one unit,” said Mathius.

In Jayapura Regency, each traditional village is led by a tribal leader who is the center of community life. Among other things, a tribal leader has the duty to protect and guarantee the welfare of his group members and to preserve the environment in his territory. Customary administrators assist the completion of this task.

However, the existence of the indigenous people was marginalized due to the enactment of Law No. 5/1979 on village government. The regulation set up the system of government in all regions in Indonesia by appointing village officials for each region. So there are two leaderships in one area in Jayapura Regency, namely the customary leadership and the village leadership. “The community listens more to the chief of the tribe than the village authority,” said Mathius.

Development that does not involve local customary leaders will usually stall. In Kampung Aib, Kemtuk District, for example, the clean water supply program was never completed because the village government did not discuss it with the customary community. The village government also refused to spend money on the people living at the water spring. “Money is not for payment, but a sign of permission. These things are not coordinated by the village authority,” said Ondoafi or the customary leader of Aib village, Pieter Dantru.

The same with the village hall construction. The village government built it on customary land without prior discussion with the tribal chief or other customary parties, therefore its presence was rejected by the community.

Pieter appreciated Mathius’ proposal on the recognition of the customary village. Four villages have been recognized in their territory. According to him, the return of the government system would be one of the forces to carry out the development. “The indigenous people are used to gotong royong (working together) and musyawarah (discussion). This will be a strength in the development,” he said.

Prior to becoming a regent, Mathius worked in several non-governmental organizations for 27 years. He served as regional coordinator for World Vision International, director for the Papua Participatory Development Planning Facilitators Association, coordinator for Freeport Indonesia’s Community Development Program, and director for the Indonesian School of Democracy in Papua. He was one of the activists who pushed for the submission of the bill on the regional regulation on the indigenous government system to the Jayapura DPRD in 2008. “The development is actually aimed at improving the welfare of the local community, but what I see is that it is done without involving the community,” he said. 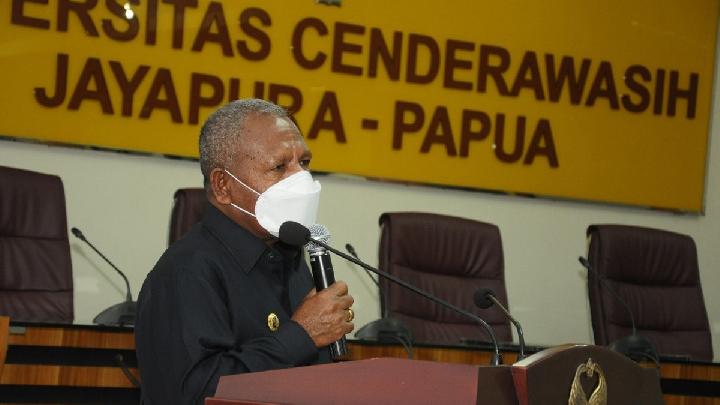 Mathius only entered politics in 2007 when he was the chairperson of the General Elections Commission (KPU) of Jayapura Regency for two terms (2007-2012). He was then repeatedly proposed to be a candidate for regional head in 2012. He was promoted by a coalition of small parties, such as the Prosperous Peace Party, the Ulama Awakening Coalition Party, and the People’s Fortress National Party. He brought a vision and mission that recognized the rights of the indigenous people. “At first I refused to be nominated. But I think, if for example I am elected, this is my chance to fight for indigenous people,” he said. Mathius, who was initially predicted not to win, actually received the most votes.

The mapping, according to Mathius, would make the area clear. Investors who wished to invest in an area could negotiate with indigenous people to reach an agreement. Later, when the contract period ended, the assets on the land would be the property of the customary community. “So far, investors have been hesitant to enter because there is no certainty,” he said.

Abdon Nababan, the Deputy Chairperson of the Alliance of Indigenous Peoples of the Archipelago, said the recognition of these customary territories could curb corruption in land use permits issuing process. All investment that came in would go through the customary community permits. “It doesn’t suddenly appear from the central or provincial governments,” he said.

This recognition, according to Abdon, would also minimize conflict in Papua. People could enjoy development more. “What he (Mathius) did can be replicated in other areas,” he said.