The Chief of Presidential Staff Moeldoko was elected General Chairman of the Democrat Party in an extraordinary congress.

PRESIDENTIAL Staff Chief Moeldoko was elected general chairman of the Democrat Party in an event claimed to be the party’s extraordinary congress at The Hill Hotel and Resort, Deli Serdang, North Sumatra, on March 5. He defeated former secretary-general Marzuki Alie. The congress was reportedly attended by at least 1,200 regional executives from all over Indonesia.

Moeldoko accepted the outcome although he arrived at the congress venue only after being elected. “This is democracy. I have no power whatsoever to force you to elect me,” said the former Indonesian Military (TNI) commander.

A week before the congress, the Democrat Party dismissed seven cadres including Marzuki Alie and Jhoni Allen Marbun, who presided over the Deli Serdang’s extraordinary congress. They were considered perpetrators of a ‘coup’ against the leadership of General Chairman Agus Harimurti Yudhoyono.

Agus declared the congress in Deli Serdang illegal and unconstitutional. The program was seen as having no legal basis, among others because it had not been sanctioned by the party’s Supreme Assembly. “That clause was not fulfilled,” he said. The Supreme Assembly Chairman Susilo Bambang Yudhoyono stated the congress was a fake. He maintained that the party management under Agus had been validated by the government through the justice and human rights ministry. 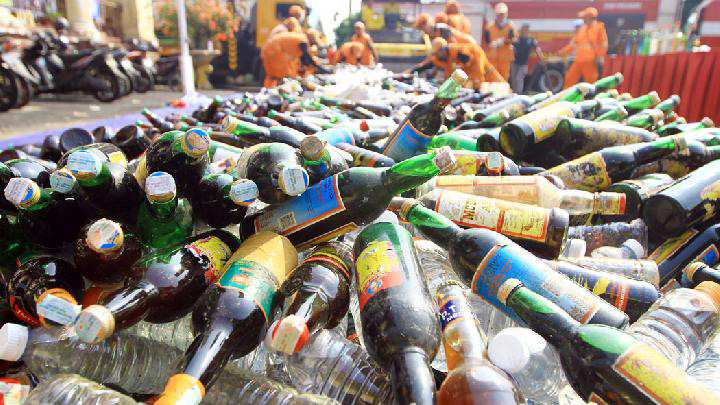 The demolition of alcoholic drink bottles at the Palmerah Police Office, Jakarta, May 2018. Tempo/Subekti

PRESIDENT Joko Widodo has repealed the attachment to Presidential Regulation No. 10/2021 on investment business sectors. The regulation among others stipulates provisions on the alcoholic drink industry. “I declare the supplement to the presidential regulation concerning the opening of a new investment in the alcoholic drink industry revoked,” he said on the YouTube channel of the Presidential Secretariat on Tuesday, March 2.

Jokowi said the decision was taken after receiving input from leaders of the Indonesian Ulema Council (MUI) and other religious figures as well as regional heads. The former Jakarta governor also considered the suggestions from religious organizations like Nahdlatul Ulama (NU) and Muhammadiyah.

The investment in alcoholic drinks regulation had previously been rejected by some circles. NU Central Board General Chairman Said Aqil Siradj said liquor consumption was banned by religious teachings. “Allowing the liquor industry means allowing the whole nation to get drunk,” he added.

THE government has announced the new Covid-19 virus variant first discovered in Britain has entered Indonesia. The virus was found to have infected two migrant workers from Karawang, West Java, who had just returned from Saudi Arabia at the end of January. “Two cases of B117 UK mutation were discovered in Indonesia,” said Deputy Health Minister Dante Saksono Harbuwono on Tuesday, March 2.

Dante said the entry of the new virus strain caused Indonesia to face the pandemic with a more serious degree of difficulty. The B117 virus is believed to have a higher rate of infection, but no research reports have yet declared the virus more lethal.

University of Indonesia epidemiologist Pandu Riono said the entry of the B117 virus variant indicated the government’s failure in controlling the pandemic. In his view, anybody arriving in Indonesia should be put in quarantine and swab-tested, instead of merely showing the Covid-19-negative certificate from the originating country.