Bringing Back Democracy to Myanmar


Human rights and security are two sides of the same coin. If ASEAN as a community is to achieve them, it must do away with the rhetorical non-interference principle which only gives regimes the upper hand in dealing with dissent. This principle is no longer relevant in this increasingly interconnected era.

SKIRMISHES between anti-coup protesters and the Myanmar police have intensified in the recent days with the latter becoming increasingly violent. The world watched the unfolding horrors in real time as the country descended into chaos. In several cities, the security forces apparently given a carte blanche fired live rounds on the protesters armed with nothing but flaming spirit and makeshift self-defense tools. On March 3, in Mandalay, a rooftop sniper shot and killed a 19-year-old protester whose picture became a symbol of police savagery. The unofficial death toll as of March 4 stood at 57 with hundreds more injured and arrested.

The endgame is still nowhere in sight as protesters vowed to continue their fight until the elected leaders are released and the power returned. People of different races, ethnicities and faiths, including those disgruntled by the National League for Democracy (NLD) government’s handling of the Rohingya crisis, and even Rohingyas in refugee camps came together in solidarity against the junta. In Myanmar where ethnic and religious cleavages are sharp, such a show of unity is unprecedented. The sheer numbers of protesters braving the pandemic is a testament to the fact that the army-backed Union Solidarity and Development Party (USDP)’s voter fraud allegation has no merit.

Amid efforts from international agencies to mediate, the junta seems hell bent on staying in power. The Association of Southeast Asian Nations (ASEAN) has been trying to help break the impasse albeit little faith of the people in the bloc which steadfastly stands by its infamous non-interference principle when it comes to human rights abuses. Tatmadaw—Myanmar's notorious army which has been perpetually at war since the country’s independence in 1948—has repeatedly gotten away with numerous human rights crimes most notably the genocide against Rohingyas without any accountability. So, when the ASEAN foreign ministers met to discuss Myanmar on March 3, many had already predicted the outcome especially because the group only invited the junta appointed foreign minister. And it did not disappoint. The meeting only resulted in yet another half-hearted statement as undemocratic members refrained from saying anything meaningful about the dire strait situation in Myanmar. 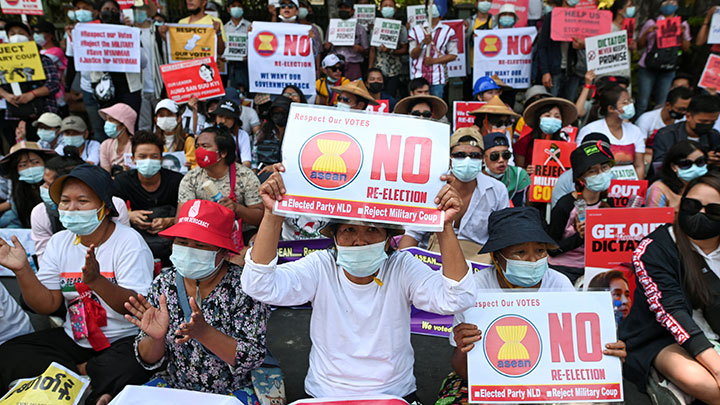 Demonstrators hold placards during a rally against the military coup in front of Indonesian embassy in Yangon, Myanmar, February 24. Reuters

ASEAN was first founded to promote peace, security, and later, economic prosperity in the region. In 2012, it adopted the Human Rights Declaration and each member affirmed its commitment to protecting their citizens’ rights. But the absence of binding measures makes it just another dead letter. And today’s tragedy confirmed this notion.

Human rights and security are two sides of the same coin. If ASEAN as a community is to achieve them, it must do away with the rhetorical non-interference principle which only gives regimes the upper hand in dealing with dissent. This principle is no longer relevant in this increasingly interconnected era.

So much is at stake in this crisis, the lives and the future of Myanmar’s youths, the economic consequences not only from the unrest but also from the ongoing pandemic which will surely spill over to the neighboring countries, the reversal of democracy the people had just earned through much blood and sweat, and ASEAN’s own credibility. 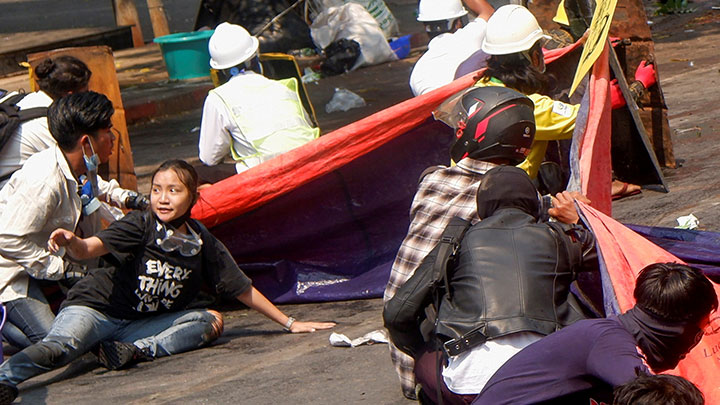 Protesters lie on the ground after police opened fire to disperse an anti-coup protest in Mandalay, Myanmar, March 3. Among them, Angel (bottom-left), 19, also known as Kyal Sin, took cover before she was shot in the head. Reuters

For Indonesia, the crisis presents a unique opportunity to take a more prominent role given its own remarkable journey of evolving from the military dictatorship to the budding democracy today. United Nations-led efforts so far have hit ‘the brick wall’ from China and Russia. The much-awaited UN Security Council’s meeting on Friday, March 5, ended in a deadlock. ASEAN should facilitate Indonesia pursue a diplomatic road map towards an inclusive democratic transition that respects the Myanmar people’s wishes as Foreign Minister Retno Marsudi trumpeted. However, it is imperative that further efforts require walking on a fine line between the junta and the Committee Representing Pyithu Hluttaw (CRPH) or parliament. Previous meetings with the junta-appointed foreign minister seen as legitimizing the junta sparked anger and distrust among the Myanmar people.

ASEAN is at the crossroad where it must decide whether to look beyond the usual status quo and remain a paper tiger or take a breakthrough step towards becoming a more decisive and relevant regional superpower in the midst of ever evolving geopolitical challenges. As it envisions an integrated, people-oriented people-centered community by 2025, it is high time ASEAN rethought its regime-centered approach and shifted towards a people-centered approach, the principle President Joko Widodo always espouses. And under his leadership, Indonesia has the best shot to spearhead much needed change in ASEAN.